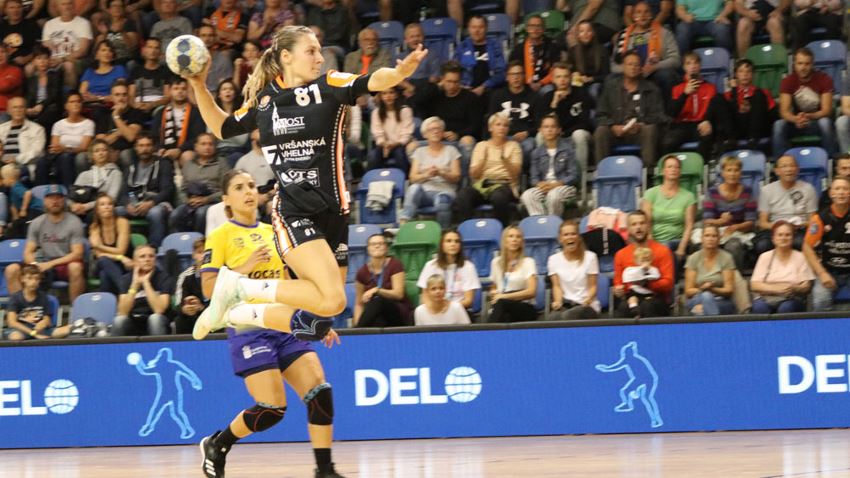 Most and Kastamonu to face off for last group D spot

The big final will be played on Sunday in Most, when the home side’s attractive handball will be tested by an experienced side who could become the first Turkish team to play in the group matches of the European top competition.

As the current title holder in the Women’s Challenge Cup, Rocasa Gran Canaria were probably the favourites to win the match, despite Most hosting the qualification tournament.

Yet the Czech club, who were aiming to spring a surprise, promised a free-flowing type of handball and duly delivered. They jumped out to a 4:1 lead after eight minutes.

Slowly, their defence started to falter and Gran Canaria took control of the game, 11:9, but the first half ended in a stalemate, 11:11.

Their superior experience still made Gran Canaria the favourites, but a flawless second half from Most turned the game on its head.

With Slovakian left back Alica Kostelna in superb form – scoring five of her seven goals in the second half – Most took control of the game and never relinquished it, scoring a superb 28:21 in their maiden DELO WOMEN’S EHF Champions League game.

As Gran Canaria were left stunned by the superb display, Most celebrated early and could start planning for Sunday’s final.

A young Jagodina team never stood a chance against an experienced Kastamonu, who jumped to a 5:2 lead after only 12 minutes.

It was the Turkish defence who impressed most, as they won balls at an alarming rate from Jagodina, who only managed to score six goals in the first half.

A nine-goal advantage at the break, 15:6, was too much for the Serbian side to claw back. Any attempt they made at a comeback in the second half was easily thwarted by the Turkish club.

Kastamonu had a 13-goal lead after 41 minutes, pushing Jagodina to their limits time and time again, both in attack and in defence.

Ultimately, the Turkish side completed a 31:15 sweep and will meet Most in Sunday’s final.

The winner will meet Most in the final, with a place in group D at stake, while Jagodina and Rocasa Gran Canaria will clash in the 3/4 placement match.

WATCH: It's shots like this from Yana Uskova that have put Kastamonu Belediyesi in control of their match against ZORK Jagodina - they held a comfortable half-time lead.#deloehfcl #ehfcl pic.twitter.com/PSN6GrCiBE