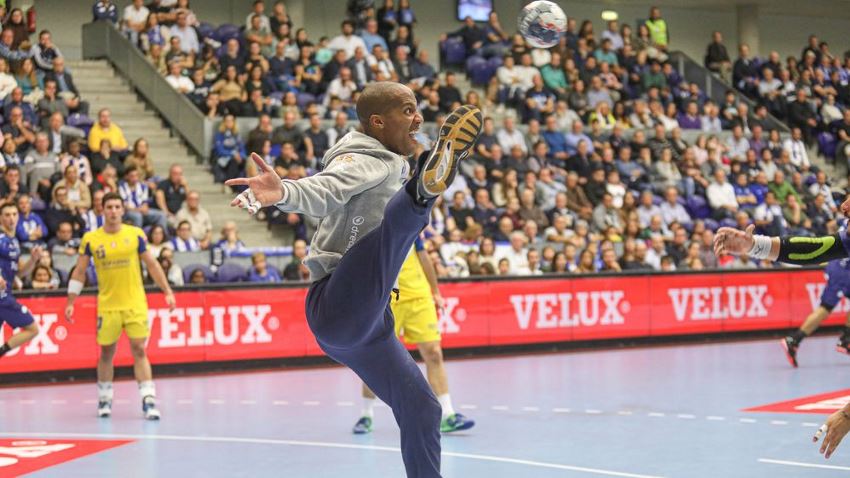 Alfredo Quintana has been one of the best goalkeepers this season in the VELUX EHF Champions League, with his saves helping Porto to an eight-point tally after seven rounds in Group B. But none of the saves has been more impressive than his last on Sunday, when he denied Nikola Bilyk’s spin shot. “I can fly” was Quintana’s caption on Instagram and he certainly did.

A special celebration for Tomas

A special GIF for a special player. Barça’s Victor Tomas has scored his 700th goal in the VELUX EHF Champions League this weekend, when the Spanish champions won their six game in a row, 34:30, against Aalborg Handball. The 34-year-old right wing is a one-club man, plying his trade for Barça throughout his career, with his first game in Europe’s elite competition coming in the 2003/04 season.

Why did Nikola Karabatic turn green? Yeah, it was just a fun play on Karabatic’s antics on the court, as the French left back had another great game, helping PSG win against Flensburg, 30:29, with a five-goal outing. Karabatic is PSG’s Hulk, a force to be reckoned with, who can dictate the rhythm and impose himself on any match.

Youngest fan on the court?

You are never too young to watch handball and the passion can be instilled from the earliest of ages, as shown by this MOL-Pick Szeged fan, who could enjoy her side’s 32:25 win against Elverum. The passion showed by Szeged’s fans is next to none in the competition.

A A corner goal? Easy for Celje

How hard is it to score from a corner shot? Celje have been practising it and it shows they are quite good at converting those shots. We did not see it in the game against Zagreb, but the Slovenian side’s 24:22 win surely helps them to fuel their dreams of a Last 16 berth as they are three points ahead of Elverum and Zagreb.

An emotional return for Karacic

For six seasons, Igor Karacic has donned Vardar’s shirt, winning the VELUX EHF Champions League two times with the Macedonian side. This summer, the Croatian playmaker left for PGE Vive Kielce and was honoured by his former club and the fans when Kielce visited Skopje last weekend. The game ended in a tie, 28:28, but Karacic had his eyes filled with tears after revisiting some of the beautiful memories he created in the Vardar shirt.

Györ are dominating once again in the DELO WOMEN’S EHF Champions League, as they already secured first place in Group D, but we focus on their traveling in style this time, with every player getting a personalized suitcase for the away games, with the club’s logo on it. Nice touch for the champions.

Vipers are the heart and soul of Kristiansand and their games have always featured lots of fans, but this time, the call to action was special. Going to the local supermarket and having your favourites cheer for you or being invited to the games just when you are taking a stroll through the city center is special, makes you feel special.