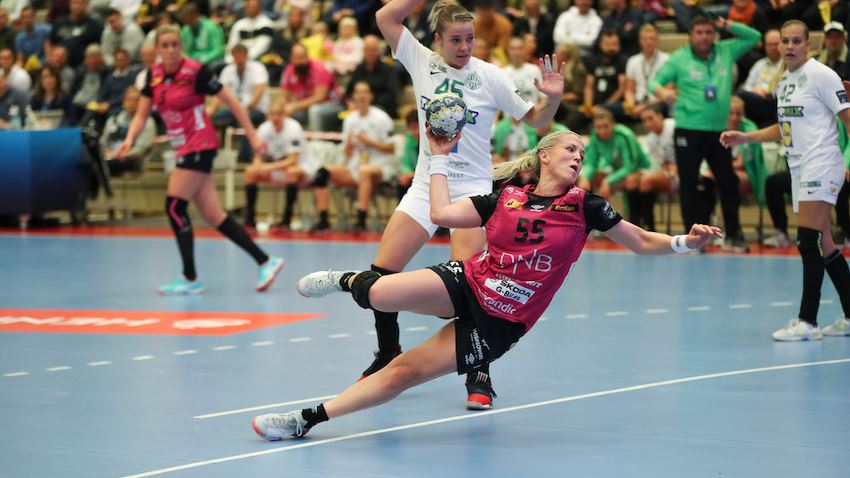 Loke: “We still need to learn from our mistakes”

At the age of 36, Heidi Loke has returned this season to the DELO WOMEN’S EHF Champions League – the competition she won twice with Györi Audi ETO KC.

Her joining Vipers Kristiansand was one of the most prominent signings ahead of the 2019/20 season, and still one of the best line players in the world, Loke has already proved she is a remarkable reinforcement to the Norwegian back-to-back champions.

Having finished third last season, expectations have been high in Kristianstad. But after a win and a defeat in their first two matches, Vipers have to do better, says Loke, talking to ehfCL.com ahead of Sunday’s match against Metz Handball (live on ehfTV.com at 15:00 CET), a repeat of last season’s third-place match in Budapest.

Vipers against Metz will be the second Match of the Week in the DELO WOMEN’S EHF Champions League.

ehfCL.com: What do you think of the launch of ‘Match of the Week’ also in the DELO WOMEN’S EHF Champions League too?

Heidi Loke: I think it is a great and innovative idea. After the men have had it for so long, I only think it is fair that it has also been introduced in the Women’s Champions League. It is a great honour to be involved in it, and it will probably draw even more attention to the match. However, as players, we should also be careful not to focus too much on things around the match. We will have enough to do in focusing on our performance against a very strong opponent.

ehfCL.com: There was some confusion about your handball future after last season, when you played for Storhamar Elite Handball. How did you actually end up with Vipers?

Heidi Loke: Originally I had arranged to play in Larvik, but as they were relegated into the 1. Division (the second-tier league in Norway) I had to realise that this could not be combined with playing in the national team. I had already had a chat with Vipers coach Ole Gustav Gjekstad, who said I would be more than welcome in Vipers if things would not turn out as hoped with Larvik, so when the situation turned out the way it did, this was a natural step for me. Vipers were playing the Champions League, and it was a great opportunity for me to get back into that competition.

ehfCL.com: There was also some confusion about your fitness a few weeks ago. You were reported to have a serious knee injury which would keep you out even of the World Championship in December. But just a few days later you were playing again. What happened?

Heidi Loke. I twisted my knee in a friendly international against Brazil. X-rays after that game showed a meniscus injury, which needed surgery, and which would keep me out for five to six months. The game was on a Friday, and the surgery was set for the following Wednesday. The surgeon, who was going to operate on me, wanted to do some clinical tests on my knee the day before the surgery, but already on Monday I told him that I did not understand why surgery was needed, as I could do all the things with my knee again that I had been unable to do on Friday.

ehfCL.com: How has it been for you to join Vipers?

Heidi Loke: It has been just as great as expected. I get along very well with the girls here, and Ole Gustav Gjekstad and Katrine Lunde are very good coaches. The team has played in the Champions League for two years already, and you can really feel that. The environment here is very professional.

ehfCL.com: You are 36, how long do you expect to keep playing?

Heidi Loke: I still love to play handball and I still feel fit, so if I can avoid major injuries, I hope to go on for maybe four or five more years.

ehfCL.com: How is it to be a line player in this team?

Heidi Loke: It is really fine. We have some very good shooters in our backcourt line who are good at drawing the attention of the opponents’ defenders and thereby make room for the line player, and they are also very good at feeding us line players with excellent passes.

ehfCL.com: You played six years in Györ before returning home to Norway two years ago. How would you compare Vipers with Györ?

Heidi Loke: The two clubs are similar in the way that they both work very professionally. They have highly professional players and great coaches. However, Györ obviously have much more financial power than Vipers, but we still have a very professional setup in Vipers. Once in a while I hope and believe that we can challenge them.

Heidi Loke: It is hard to say at this point. We are several new players who have to get integrated into the team, and we all know that such things take time. Furthermore, we have been hit by several injuries at the start of the season, and even though we have a rather deep squad, those injuries have had some impact, too. Therefore, our first objective is to get on from the group matches, and I think we need some more time to find out what we may realistically dream of achieving this season.

ehfCL.com: Talking about injuries, Vipers are currently missing key players like goalkeeper Katrine Lunde and playmaker Henny Reistad. What does their absence mean to the team?

Heidi Loke: It is obvious that missing two world-class players like them can be felt. However, we have been fortunate to sign a Chinese national team goalkeeper, Yurou Yang, so we have two really good goalkeepers now. We do not know when Henny will be back, and of course, we miss her in the attack, but we benefit from having a deep squad.

ehfCL.com: Your team started the Champions League by winning no less than 31:22 at home against FTC-Rail Cargo Hungaria and losing 25:24 away against HC Podravka Vegeta, who had lost their first match 40:26 to Metz. How do you explain two so different performances?

Heidi Loke: Against Ferencvaros we got off to an extremely good start, not least in the defence. That way, we built a rather clear lead at an early stage, and Ferencvaros did not seem able to withstand that. Against Podravka, we have to admit that we were simply not ready from the start. We thought we were ready, but we were not. We got down 5:0 from the start, and you can simply not afford anything like that when you play in the Champions League. We simply made too many mistakes and missed too many opportunities. We will simply have to learn from that.

ehfCL.com: Sunday afternoon you receive Metz, who have won both their first matches clearly. How do you see the chances against them?

Heidi Loke: There is no doubt that it is going to be an extremely tough match for us. Metz’s results speak for themselves. They have a very strong team with top players in all positions. We will have to learn from the mistakes we made against Podravka and learn fast.

ehfCL.com: What will be deciding Sunday?

Heidi Loke: I think the match will be decided in the defence. A lot will depend on how well we defend from the start, and in addition to that, we will have to play with more discipline and patience in our attack than we did in Croatia. Those things will be the key, I think. We still need to learn from our mistakes.