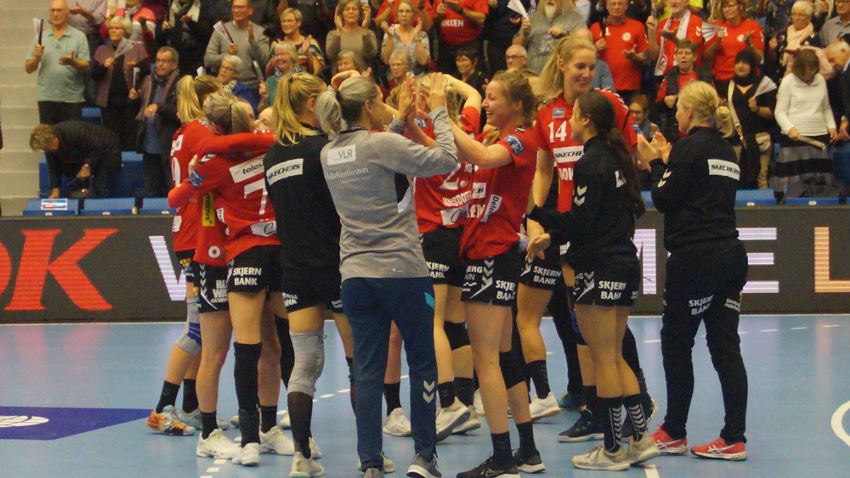 For the first time in their history, Team Esbjerg will play in the DELO WOMEN’S EHF Champions League quarter-final. After a 35:30 home win against Vipers Kristiansand, the Danish side secured an early ticket to the next round.

Despite the absence of Emilie Arntzen, Ragnhold Dahl and Malin Aune, and with just 12 players on their roster, Vipers fought hard but ultimately came up short.

Thanks to Andrea Pedersen’s saves and Marta Tomac’s goals, the visitors enjoyed a good start to the match and pulled out to a 7:4 lead midway through the first half.

Yet after a time-out called by Jesper Jensen, Esbjerg, who were driven by world champion Estavana Polman, enjoyed a 5:0 run during the next five minutes to lead 9:7.

Just three minutes from half-time, Vipers drew level at 12:12. An exchange of quick goals followed before Tomac’s penalty shot put the Norwegian side in front at the break, 16:15.

An extremely close fight continued well into the second half before Esbjerg started to dominate. The Norwegian left back Kristine Breistøl, who scored six of her eight goals in the second half, was now their driving force.

In the 52th minute, Breistøl’s shot handed Esbjerg a three-goal lead (29:26), and the hosts went on to clinch a victory.

Vipers still have a theoretical chance to progress if they beat both Rostov-Don and CSM Bucuresti, but these two teams also need to lose their other remaining matches.