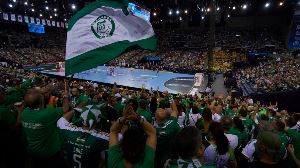 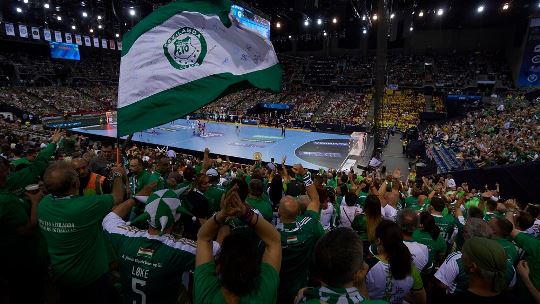 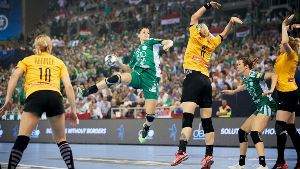 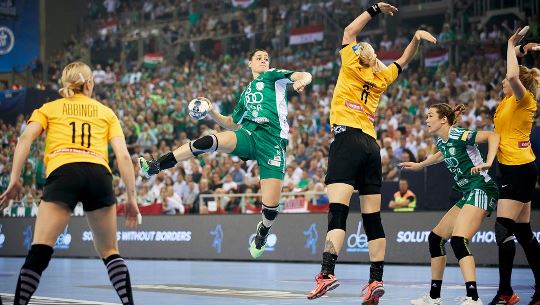 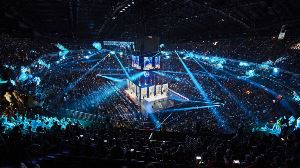 EHF FINAL4 events more international than ever
MEDIA RELEASE: The European club handball flagship events in Cologne and Budapest have become true international sports events where fans enjoy the full package of exciting handball and spectacular entertainment, according to a new survey conducted by Global MMK
4 months ago - 9/2/2019 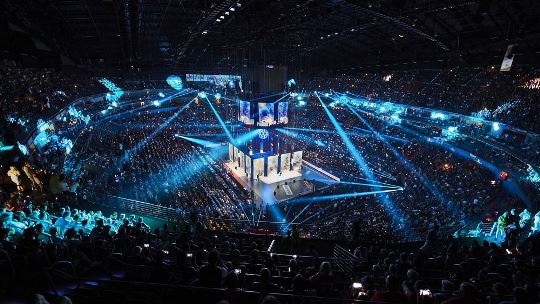 EHF FINAL4 events more international than ever
MEDIA RELEASE: The European club handball flagship events in Cologne and Budapest have become true international sports events where fans enjoy the full package of exciting handball and spectacular entertainment, according to a new survey conducted by Global MMK
4 months ago - 9/2/2019
LOAD MORE 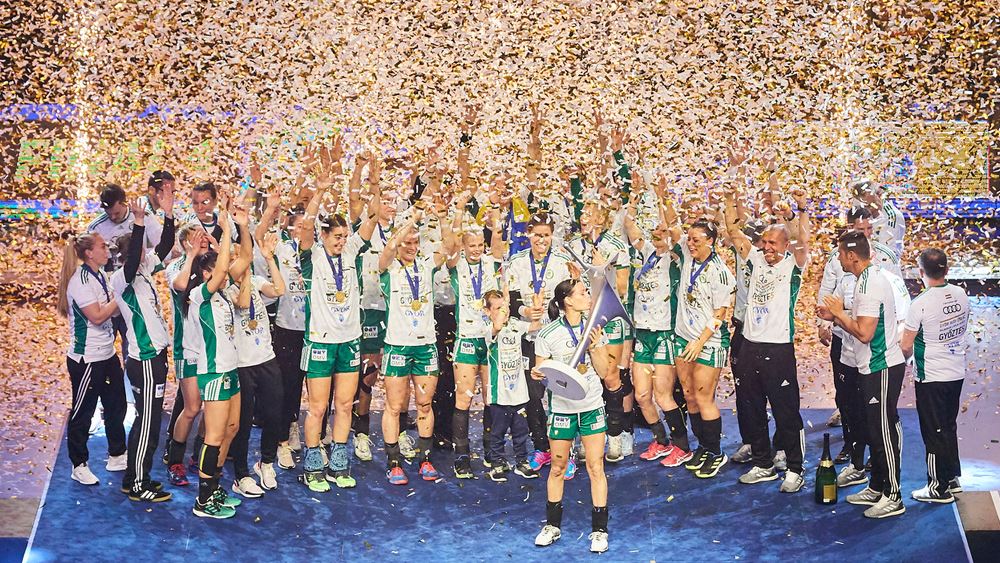 Only the best teams and the most excellent players reach the DELO WOMEN'S EHF FINAL4 on 9/10 May 2020 after a tough and challenging season. This is your chance not only to see them play, but also ask for autographs and maybe – if you’re lucky – even high-five them after the matches.

…to live and breathe handball

Never before has a handball match been such an amazing experience. You will feel like almost being on the court yourself, the spotlight focussing straight in your face when you enter the field of play. You will hear the players shouting from one end of the court to the other – but it feels like as if they were shouting directly at you. And when your favourite team scores and wins, you know that coming here has been the right decision.

…to cheer as loud as you have never done before

The DELO WOMEN'S EHF FINAL4 is not the place to settle back in your comfy chair and relax. Your team will need your support, if it wants to go all the way to the top of the podium. So cheer, scream, wave and clap as loud as possible – be sure the players down at the court will hear it and get this extra boost they might need.

…to experience a unique show

The shows before every game, the music that is pumping, the performances on court, the thrill of four do-or-die matches – all this culminates over two days and when the final whistle blown, emotions burst out. The DELO WOMEN'S EHF FINAL4 is something you don’t want to miss.

Come to Budapest for the DELO WOMEN'S EHF FINAL4 and be part of the experience!

World Heritage wherever you go

Many parts of Budapest are listed by the UNESCO World Heritage Committee, including the view of the Danube embankments and the Buda Castle District, which is one of the most beautiful and romantic parts of Budapest.

Furthermore both the Pest and the Buda embankments of the Danube stretching from Liberty Bridge all the way up to Margaret Bridge, the area around the Chain Bridge, some of the buildings belonging to the Budapest University of Technology and Economics, the Gellért Bath, the Gellért Hill with its Statue of Liberty and the Citadel, the Castle of Buda, the Baroque churches and Turkish baths of the so-called 'Water Town' are all part of the world heritage list.

On the Pest embankment world heritage buildings and sights include the Parliament, Széchenyi Square, the Academy of Sciences and the Gresham Palace. The Heroes' Square along with its surroundings and Andrássy Avenue with the first underground in Europe, the Millennium Underground Railway, have also become part of the UNESCO list.

From coffee houses to world cuisine

With Hungarian cuisine known for being among the best and richest in Europe, Budapest is famous for its excellent food. Traditional Hungarian food has an unmistakable character, often rich in sour cream, onions, eggs, butter, fresh produce and wine. However, there is a great selection of world cuisine restaurants in the city as well. And for all sweet lovers out there, Budapest is also home to hundreds of coffee houses – some modern, some antique – offering cakes and delicious cakes.

Budapest has hosted many international sport events over the past few years as athletes from all over the world competed in European and World Championships in the Papp László Budapest Sportaréna.

The city organised the Swimming European Championships as well as judo, wrestling, pentathlon and ice hockey (first division) World Championships. In 2004 and in 2014 the Women's EHF EURO was and will be held in Hungary's capital. Furthermore Budapest is home to the winners of 2011 and the 2012 Cup Winners’ Cup in women’s handball, FTC-Rail Cargo Hungaria.

The arena is named after legendary Hungarian boxer László Papp who won consecutive gold at the 1948, 1952 and 1956 Olympic Games, making him one of the world’s most successful athletes in boxing.

Born out of flames

In December 1999 the former Budapest Sportaréna, which was built in the same location, burnt to the ground. The catastrophe shook the public in Hungary as the arena had been the country’s only one capable of holding several thousands of people at sports and cultural events. Decisions were made quickly to build a new arena. Construction began in June 2001 and one year and a half later, in March 2003, the new Sportaréna opened its doors to the public.

Is it a horseshoe or a stone?

The arena attracts with its unique design which is sometimes referred to as a horseshoe and sometimes as a stone. The former focusses on the interior as the arena’s permanent tribunes run along the two long, but only along one short side, whereas stone is more apt with regards to the arena’s outside appearance. But either way, it is simply stunning no matter what it is called.

“Let me entertain you”

By bringing the best international acts such as Kylie Minogue, Pink, Robbie Williams, top quality family shows such as “Disney on Ice” and a variety of other special events to the Hungarian and Central European audiences, the arena puts itself among the most sought-after venues in the entertainment business.

The citadel of sport

Papp László Budapest Sportaréna has also made a name for itself as a grand venue for sport events. It hosted the Women’s EHF EURO 2004 and has also been the venue for numerous basketball and ice hockey matches as well as for gymnastics and athletics championships. 2014 was ‘the years of handball’ for the arena with the MVM EHF FINAL4 in May 2014, as well as the Final Weekend of the Women’s EHF EURO in December. The DELO WOMEN’S EHF FINAL4 will return for the seventh time on 9/10 May 2020.

• The year the first Sportarena burnt down: 1999
• Beginning of reconstruction: 30 June 2001
• The building complex is as heavy as the Erzsébet and the Szabadság Bridges together.
• If you could pick it up and put it on scales, it would weigh 200,000 tons.
• The pedestrian area of the complex is covered by Hungary's largest continuous
granite surface: 25,000 m2. 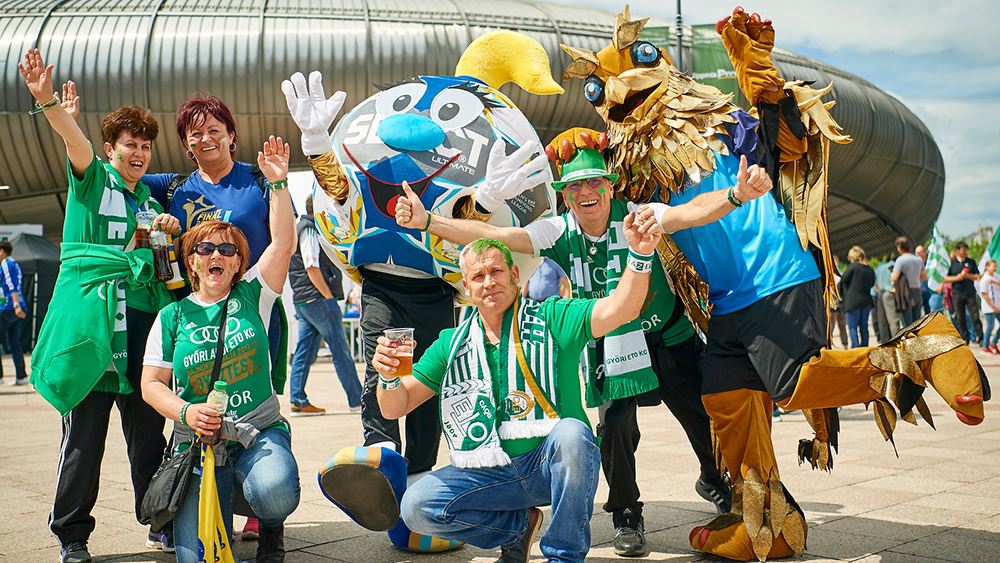 The DELO WOMEN’S EHF FINAL4 2019 has been sold out again. Expectations have been exceeded as tickets sold out before the finalists were set.

For the seventh consecutive year the DELO WOMEN’S EHF FINAL4 will return to Budapest on 9/10 May 2020. The Papp László Budapest Sportaréna will again welcome 12,000 specators.

Tickets are now available via this link. 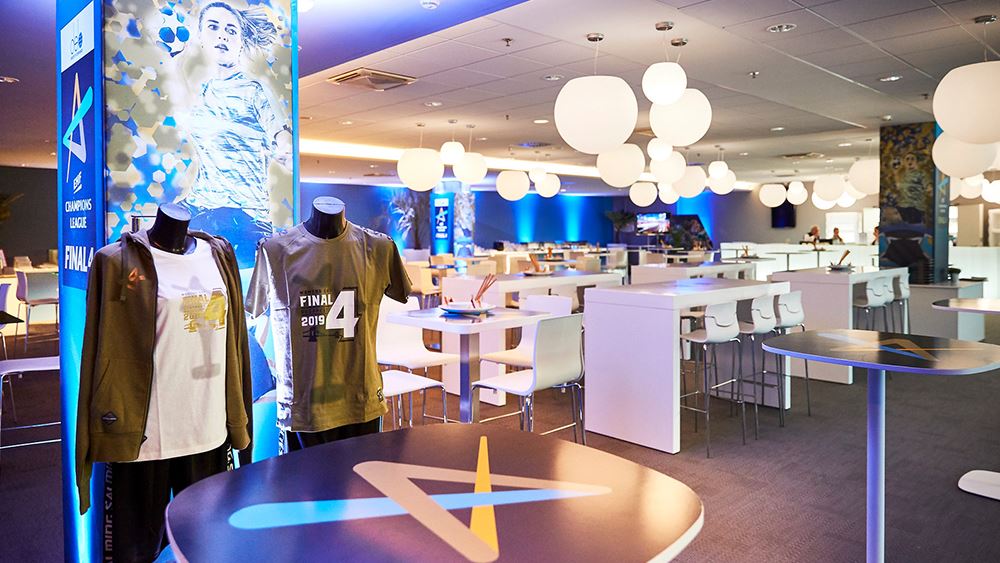 The aim is to fulfill our guests’ requests on the highest level for the ultimate VIP experience. Fast response for your convenience is key – your personal experience shall be one to remember. A high-quality event with a full VIP programme is guaranteed: enjoy world class sporting excellence with the best handball players of the DELO WOMEN’S EHF Champions League from the best seats in the house. You might even get the chance to meet former legends in the VIP lounge.

If you have any questions, please contact us via e-mail: wf4vip@mksz.hu