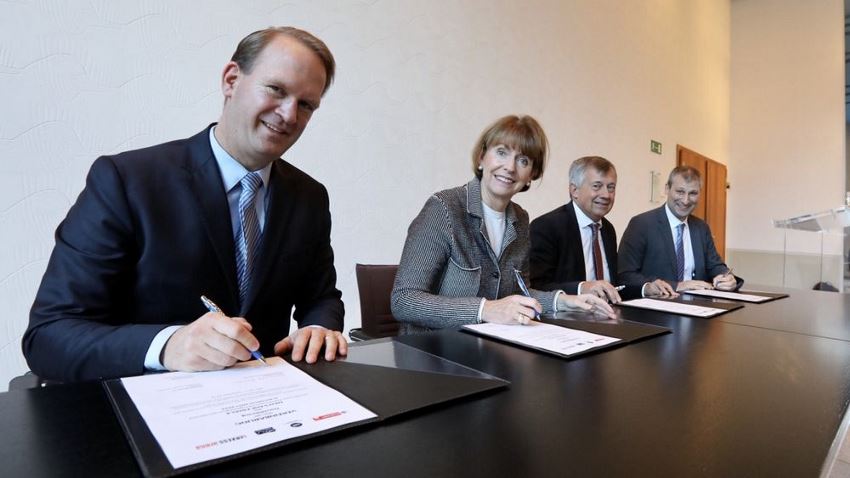 EHF FINAL4: Cologne confirmed as host through to 2024

Cologne has once again confirmed its status as the home of top-class international club handball.

In a new deal signed by the European Handball Federation and EHF Marketing GmbH, organiser of the VELUX EHF FINAL4, with the City of Cologne, LANXESS arena and federal state of North Rhine-Westphalia it has been confirmed that the event will return for a further four events, starting in the 2020/21 season.

Established in 2010, the VELUX EHF FINAL4 has developed to become the biggest and most successful indoor sports event on the indoor sports market. The current contract with Cologne runs through to the 2020 event.

Its unique blend of top-class sports action and spectacular entertainment has made the two-day mega event a must-see meeting place for everybody connected to the sport.

This season the event will also celebrate a major milestone with the tenth edition to be played on 1/2 June 2019.

From the start of the 2020/21 season, the EHF and EHF Marketing will begin a new partnership with Infront and DAZN, which is set to transform the sport.

And, as the federation’s flagship club event, the FINAL4 will continue to serve as the sport’s showcase event and culmination of the European club season.

Michael Wiederer, EHF President, said: “Cologne is a special place for everybody in European club handball.

“Every top player dreams of playing in Cologne, the event is a must-visit for every handball fan and Cologne has become a meeting place for a ‘who’s who of international handball’ year after year.

“This sports city offers the perfect conditions for the organisation of the FINAL4: a central location in the North Rhine-Westphalia region, where handball is hugely popular, and a venue – the LANXESS arena – which ranks as one of, it not the, best handball arenas in Europe.

“The renewal of the contract with the City of Cologne, LANXESS arena and also the federal state of North Rhine-Westphalia was a natural choice and we look forward to celebrating not only 10 years of the EHF FINAL4 in 2019 but also the 15-year anniversary in 2024.”

David Szlezak, Managing Director of EHF Marketing GmbH, said: “The FINAL4 has already established itself as the leading sports event on the European indoor sports market since its launch back in 2010.

“This is thanks, in no small part, to the long-term partnerships we have developed with trusted partners including the City of Cologne, LANXESS arena, North Rhine-Westphalia and our local partner, Stadionwelt.

“This new contract from the season 2020/21, parallel to the start of our new media and marketing contract, offers us the opportunity take the FINAL4 in a completely new level and further improve on what we have already achieved with this flagship handball event.”

Henriette Reker, Lord Mayor of the City of Cologne, said: “The FINAL4 will remain in Cologne and the LANXESS arena until at least 2024. This is wonderful news and a vote of confidence from the EHF.

“Since 2010, we have been hosts of this top-class European handball festival, which will celebrate its 10-year anniversary in the coming year.

“This is the right choice in our opinion, not only because of the successful cooperation between the City of Cologne, LANXESS arena and the state of North Rhine-Westphalia but also because of the fantastic supporters and unrivalled atmosphere here. Handball has found its home in Cologne.”

Andrea Milz, State Secretary for Sport and Volunteering for the federal states of North Rhine-Westphalia said: “This is a good day for all handball enthusiasts in Sportland NRW. The highpoint of the European clubs season, the VELUX EHF FINAL4, will stay in Cologne’s LANXESS arena until 2024.

“I would like to congratulate the City of Cologne and I am delighted that we can continue our successful cooperation. Through this, the excitement we all share for the FINAL4 will continue to grow and will be transferred not only to fans but also, most importantly, the teams, who profit from the great atmosphere.”

Stefan Löcher, Managing Director of the LANXESS arena, said: “The FINAL4 will remain in its adopted home until 2024 and this makes us both proud and happy at the same time.

“In 2010, we gave the format a platform for the first time and from that first day the FINAL4 has fitted perfectly to Cologne and the LANXESS arena. Since then handball fans from across Europe have visited us every year to celebrate the largest weekend-long handball party of the year.

“The fact that this success story will continue to be written by the EHF, City of Cologne and North Rhine-Westphalia as well as the LANXESS arena until at least 2024, is a great honour for the handball-city of Cologne.”