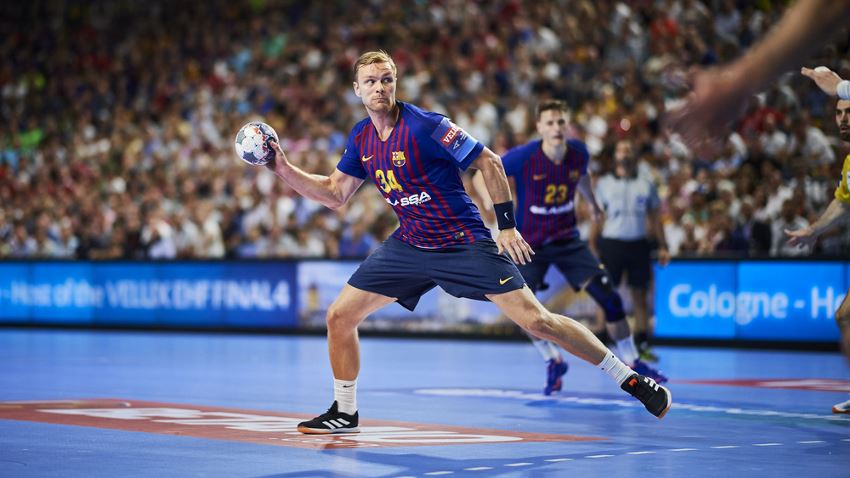 Never before has a team scored 40 goals in a VELUX EHF FINAL4 match without extra time, never before have fans in Cologne seen 75 goals in 60 minutes. Anyone who thought Barça Lassa and PGE Vive Kielce would play half-hearted after losing their semi-finals on Saturday was completely wrong.

In a match with almost no defence, but full of goals and speed, the fans in the sold-out LANXESS arena saw an entertaining 60 minutes. Both sides wanted to win, to score and to entertain the spectators.

“It’s a little bit of an ambivalent feeling right now. We won that match, but it makes us 'only' third place. As Barça you want to win the title – that’s what we came here for,” said keeper Gonzalo Perez de Vargas following the match.

Barça were ahead from 3:3 on and pulled ahead quite easily to a five-goal advantage in the middle of the first half. Backed by goals from Dika Mem and Jure Dolenec, combined with the fact that nine different Barça players had scored after just 20 minutes, the Catalan team were the better side.

Kielce worked hard, but it took until the middle of the second half to come closer, as they reduced the gap from 25:30 to 29:31 in minute 47, prompting a Barça team timeout. The Kielce supporters cheered for their heroes, but the dream of returning to Poland with a victory was over five minutes before the end, when Ludovic Fabregas netted for 37:32.

Even the strong performance of youngster Arkadiusz Moryto, who became the third player of this VELUX EHF FINAL4 edition to finish with a double-digit tally after Veszprém’s Petar Nenadic and Vardar’s Dainis Kristopans in the semis, could not change the result.

“We wanted to win that match especially for our fans. What they did over there in that yellow corner was simply amazing. Did you see anyone sitting? We wanted to reward them at least with the bronze medal. Now we have to return to Poland empty-handed,” said a disappointed Krzysztof Lijewski following the game.

In the final stages, Barça’s defence ace Thiagus Petrus made history, as he became the first player ever to receive two red cards in the same VELUX EHF FINAL4 tournament – on Sunday after three suspensions, following a direct one on Saturday in the semi-final against Vardar.