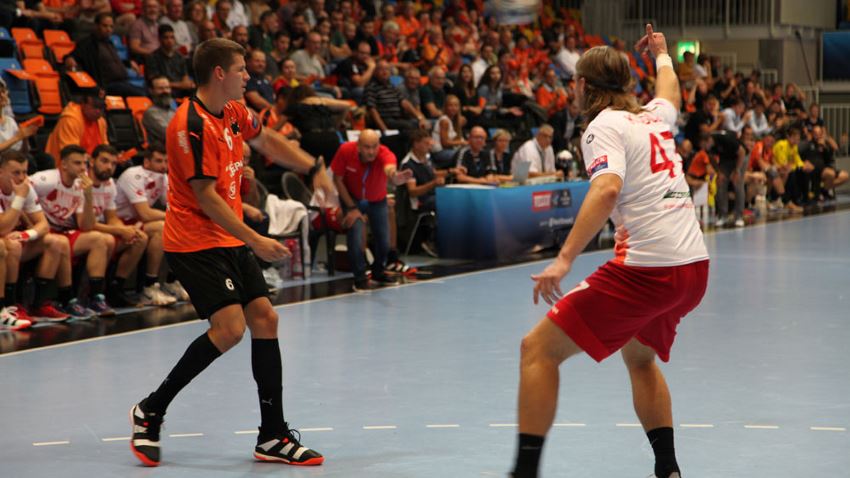 Neither Kadetten Schaffhausen nor C.S. Dinamo Bucuresti were able to establish a deciding lead in the BBC Arena in Schaffhausen on Thursday night. After 60 close minutes the opening match in group D finished with one point for each team, with the encounter ending 28:28.

Kadetten gave Toblerone chocolate to their opponents before the match, but the candy was not all Dinamo Bucuresti took with them from Switzerland on Thursday night.

To the pleasure of the many fans the visitors had brought to the BBC Arena, Dinamo managed to secure a 28:28 draw against Kadetten after a close match. Both teams fought hard for the win, but there was never more than two goals between the parties.

Kadetten got the better start and a couple of two-goal leads, but after pushing their defence forwards, Dinamo managed to take the initiative and their own two-goal lead.

Partly through a fine performance from Saied Heidarirad in goal, the visitors managed to stay a goal ahead until 12 minutes before the end.

Two fast break goals from a strong Luka Maros took Kadetten two goals up at 23:21, but a determined away team caught up once again and secured the draw.

“It's difficult to decide if we won a point or lost a point,” he said. “There was only a little bit of luck missing for the two points. My team fought very well. Our next goal is to win a point against Wisla Plock next week.”

Dinamo coach Sebastian Bota praised the performance of Kadetten’s goalkeeper Kristian Pilipovic, adding: "We are satisfied with the point. It was a very attractive game for the spectators.”