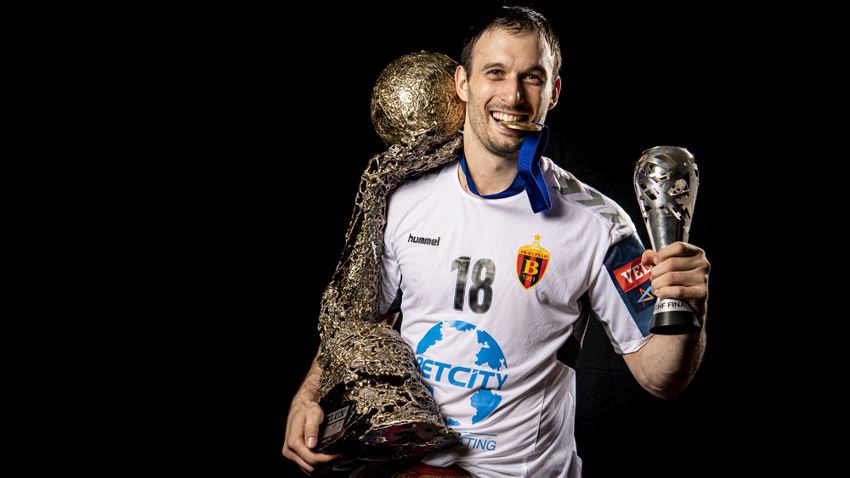 Karacic: Time for a new challenge

Last season was a special one for Croatian international Igor Karacic. His team, HC Vardar, beat Telekom Veszprém in the final to raise the VELUX EHF Champions League trophy for the second time, and Karacic himself was named as MVP for the VELUX EHF FINAL4.

Also, his pass to Stojanche Stoilov in the match against Veszprém won the handball fans' online vote for best assist of the season.

The win was the fairytale end to a turbulent season. Vardar’s players arrived in Cologne after months of speculation about the future of the club, determined to finish off the year in the best way possible. The 27:24 victory over Veszprém was just that.

Vardar will continue next season, but without Karacic. He is moving to PGE Vive Kielce after seven and a half years in Skopje.

“I decided to look for some new challenges. I think that now when we are on top of Europe for the second time that is a good time to make a new step in my career,” says the 30-year-old.

Skopje always in his heart

The Croatian centre back admits that saying goodbye to Vardar was not an easy decision, and that Skopje will always have a special place in his heart.

“I came to Vardar almost eight years ago. At the beginning, no one thought we could accomplish what we did. As a young boy I fantasised about winning the EHF Champions League and by achieving that, all my dreams came true,” he says.

“It was hard to say goodbye to Vardar, to Skopje and to all the people I met there. It feels like home in Skopje, I made a lot of lifetime friends but that’s sport - you never know where life will take you,” he adds.

Karacic’s new home, Kielce, is another former VELUX EHF Champions League winner. He picked the Polish club after much speculation over where he would pursue his career.

Asked why he chose Kielce, Karacic says: “When you’re a player you constantly seek new challenges. There were many offers from various clubs, but I chose Kielce because I consider that I can develop as a player there and to be happy.

“Kielce plays in a similar way to Vardar and I’m given the opportunity to play almost the same and to have the same amount of time on the court as I had in Vardar - those are the things that make players satisfied.”

The VELUX EHF FINAL4 MVP followed Cologne with a summer break before joining Kielce on 29 July at the start of their preparations for the new season. The Polish champions have a clear goal and a new roster with a clear vision of what kind of a game they will play.

The team also announced that newcomer Andreas Wolff will be the new captain and Karacic seems to be satisfied with his new handball family.

“For now, everything is excellent in Poland. All the players and everybody in the club accepted me well, you can feel that family vibe in the club. Compared to the last season, Kielce took another step forward and I'm certain that it will be even better than before in every aspect,” he says.

A post shared by PGE VIVE Kielce (@kielcehandball) on

“One of the objectives for this season is winning the national championship and cup, and, of course, we would like to make it to the VELUX EHF FINAL4. If we get to the Lanxess Arena, we know that in Cologne everything is possible,” Karacic says.

When it comes to the trophies he has won, he is proud of them all, but there is still one missing from the cabinet.

“My biggest wish was, before I left Skopje, to win the Champions League trophy again but then the MVP award came and it thrilled me. That was a reward for all the sacrifice during the season and all the hard time we had,” he says.

“I have to be honest, there is still one thing that I wish for. I want for my friends and I to hear the Croatian national anthem at the end of a championship. That would be the crown of my career, to win gold for Croatia,” he concludes.