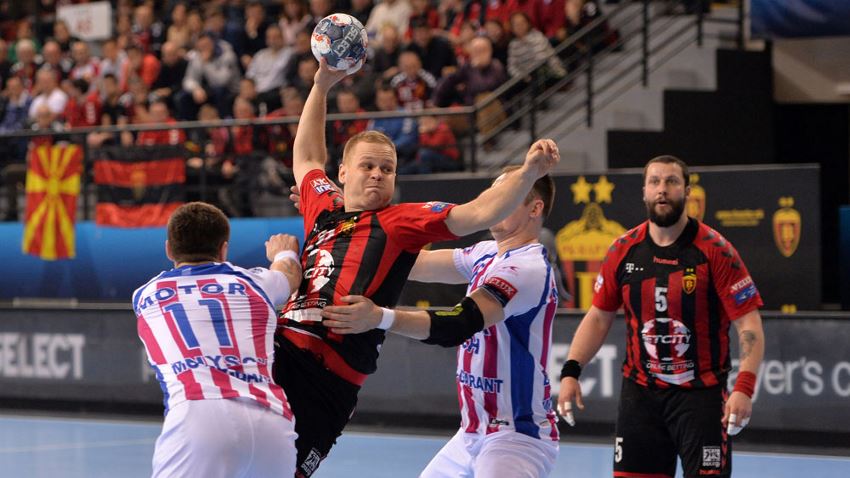 Despite losing two instrumental players this week, Vardar ended their losing streak by beating Motor 38:28, claiming a Last 16 berth for the seventh season in a row.

Montpellier also dealt Brest a huge blow with their 30:26 win. There is now a three-pronged battle between Veszprém (16 points), Montpellier (15 points) and Kielce (14 points) for second place in the group.

Porto learnt a thing or two after their heavy defeat against Veszprém last week, a game in which the Hungarian team jumped to an early 5:0 lead.

The Portuguese side prevented Kielce from scoring in the first five minutes, jumping to a 3:0 lead, but the Polish side replied with their own 3:0 run to tie the game, 5:5.

The two sides engaged in a cat-and-mouse game, with four lead changes before the break, as right wing Arkadiusz Moryto scored five goals for Kielce, but the game remained deadlocked at the break, 12:12.

With playmaker Igor Karacic back in the fold and orchestrating the attack, dishing assists to line player Artsem Karalek and fellow playmaker Angel Fernandez, Kielce had an 8:3 run to start the second half – and Porto's hopes started to fade.

Porto gave it their best to come back and twice cut Kielce's lead to only three goals.

Risking everything in attack, coach Magnus Andersson took out the goalkeeper to have seven court players, but the move did not pay dividends.

In particular, the Portuguese side were unable to stop right back Alex Dujshebaev, who scored seven goals, five of which came in the last 12 minutes of the game.

An overwhelming attacking efficiency from Kielce, 65 per cent, helped the Polish side earn their sixth win in 12 games in group B, 30:25, and they are still in the hunt for second place, sitting two points behind Veszprém.

PGE VIVE Kielce coach Talant Dujshebaev said: "Today Andreas Wolff made a big difference. He gave us a calm that we lacked in the first half in the attack. Thanks to Andi’s saves we were able to score easy goals from counter attacks in the second half and that was (the) difference."

"We played really good handball today and I am proud of my team. We started with 6:3 but then Andreas Wolff came and made some really good saves – this was a big difference today," said FC Porto Sofarma coach Magnus Andersson.

Buoyed by last week’s away win against Motor, their first in 13 games, Brest jumped to a 6:3 lead early in the match. But with left wing Hugo Descat leading the line once again, the hosts built a 5:1 run between the ninth and the 16th minute to claim back the lead, 8:7.

It was a matter of keeping the ball secure and not leak easy turnovers for Montpellier, who converted 10 of their first 11 shots into goals.

Sure enough, Montpellier’s attack slowed down ahead of the break, but their defence, which had the lowest number of conceded goals in the group after the first 11 rounds, took over. Brest only scored four times in the last 11 minutes of the half and Montpellier enjoyed a 16:14 lead at the break.

Yet the game was far from over. Needing a win to keep their Last 16 hopes alive, Brest came back and enjoyed a bright start to the second half to tie the game 19:19.

But for the second week in a row, Montpellier had a natural-born scorer in left wing Hugo Descat. The 27-year-old French player scored three consecutive goals to spur a decisive 4:0 run for the hosts.

Descat continued to run riot in Brest’s defence, as he finished with 11 goals. Right back Melvyn Richardson added another six, as the two combined to score 12 out of the 14 scored by Montpellier in the second half.

Montpellier's 30:26 win means Brest now face a huge challenge. They must beat Kiel and Porto, and need the latter to also lose to Vardar if Brest are to proceed to the Last 16.

Despite the win, Montpellier coach Patrice Canayer said there was still work to do.

"We are pleased with this result, remember that last season Brest caused us a lot of problems in this competition," he said. "It has been a complicated week for us with very contrasting results and performances. I gave the team the objective of putting together three good performances so tonight I am only partially satisfied. We’ll see in a week’s time if we have understood certain things."

Losing two key players in Dainis Kristopans and Pavel Atman this week would have hampered any team, but it did not seem to hamper Vardar as the hosts took early control of the game against Motor.

A 7:2 run with six different players scoring was exactly what the title-holders needed to throw off a difficult game, with a full “Jane Sandanski” Arena behind them.

But Motor did not look like pushovers. As top scorer Barys Pukhouski had an unusual off night, the Ukrainian club relied on Lithuanian centre back Aidenas Malasinkas, who scored five of Motor’s 28 goals.

As Vardar started to display their lack of depth, Motor got back into the game, riding a 5:1 run to cut the gap to only one goal, 11:10.

It was up to playmaker Stas Skube to save Vardar and he was instrumental to the hosts' own 5:0 run that saw them take a 16:11 lead at the break.

Led by Skube, who had his best game of the season, Vardar opened a nine-goal gap, 24:15. The Macedonian side continued to dominate and recorded their best attacking performance of the season, scoring 38 goals in their biggest win of the season, including eight from a relentless Skube.

Motor's eighth loss in the Champions League season means they no longer have any hope of progressing beyond the group phase.

Vardar secured their position in the top 16 teams in the competition for the seventh season in a row, but will have a mountain to climb if they are to finish higher than fifth, as they are three points behind fourth-placed Kielce with only two rounds to go.

Motor left back Stevan Vujovic said Vardar had been inspiring.

"They showed everyone how to fight when it is very difficult. They also showed us how we should behave in such situations. For us, this is a lesson to be learned. Everyone in Vardar was so motivated, from the first to the last minute, we just couldn't resist them," Vujovic said.