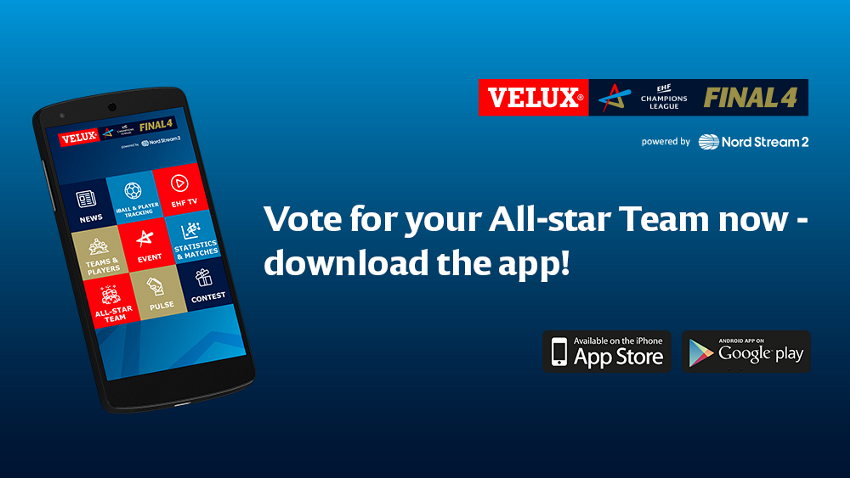 Voting for the VELUX EHF Champions League All-star Team has been launched. Fans around the globe are invited to select this season's best players with 50 nominees across 10 categories to choose from.

For the first time, the virtual ballots for their favourite players can be cast exclusively via the revamped VELUX EHF FINAL4 app, which relaunches on this occasion less than six weeks ahead of the final tournament in Cologne.

Download the app on iOS or Android and vote now.

Also for the first time, the nominations were made by several stakeholders, with one player in each category nominated by the competition's coaches, Men Forum Club Handball, EHF media correspondents, Faces of the Champions League as well as the EHF, which completed the list of nominees by the last set of ten names just before the vote started.

No fewer than 16 teams from the current season are represented by at least one player. Telekom Veszprém HC, Barca Lassa and MOL-Pick Szeged received the most nominations with six; Paris Saint-Germain HB, SG Flensburg-Handewitt and HC Vardar all received five players, while the already eliminated defending champions Montpellier HB could field just one name.

This year's selection is bound to have a fresh look as only five of last season's team have been nominated again: Arpad Sterbik, Uwe Gensheimer, Sander Sagosen, Romain Lagarde and Dika Mem.

Fans can vote only via the app and the polls will remain open until Wednesday 29 May, before the All-star Team is announced at the VELUX EHF FINAL4 eve on 31 May in Cologne.

Just before the first quarter-final matches on Wednesday the official app is available to download now for iOS and Android devices.

While before the final weekend of this season the app will serve mainly as the exclusive voting tool for the VELUX EHF Champions League All-star Team, during the tournament it will enable fans to receive live data and live streams from the VELUX EHF FINAL4 2019, video highlights, social media feeds and the latest news.

Developed together with the innovative Swiss company, Fanpictor, the app will offer a number of features to ensure that fans not only keep in touch with the latest happenings both before and during the event but can also play their part in the event's entertainment programme.

Handball fans will be able to win exclusive prizes during the build-up to the VELUX EHF FINAL4.

The milestone 10th VELUX EHF FINAL4 will, for the first time, see player tracking technology with data available through the app together with the iBall, first introduced during the 2018 event.

All important news and developments will be announced via the app including the results of the All-star Team vote on 31 May and all in all this app is a must have for every true handball fan in the upcoming weeks.

The app is available for download on iOS or Android now.

Please note that fans who already have the app on their phones from the last year's event need to update it to the newest version.