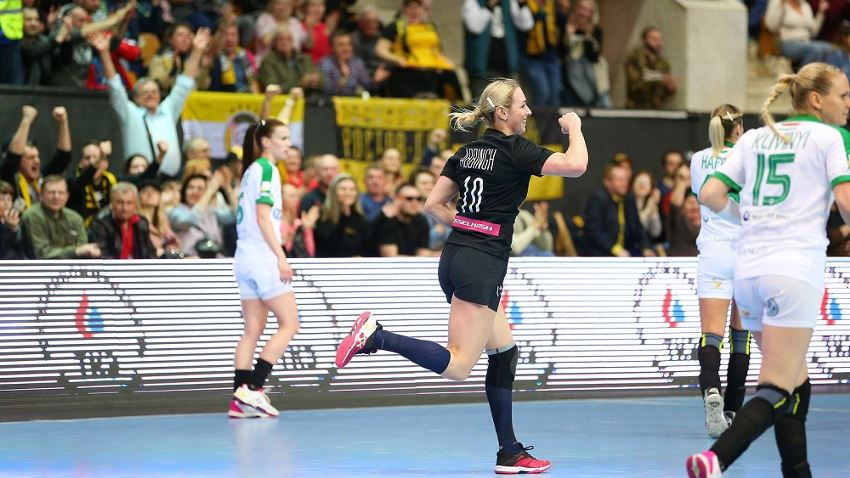 There are only four games left in this season’s Women’s EHF Champions League and we know the four teams that have progressed to the DELO WOMEN’S EHF FINAL4 in Budapest on 11/12 May.

With Metz Handball and Vipers Kristiansand, two teams have advanced to the business end of the competition for the first time. The two probable favourites, Györi Audi ETO KC and Rostov-Don, welcome two stalwarts back after lengthy injury lay-offs. Also, a word about a season to forget for one of the teams that looked like winners on paper before the season started.

Here are five talking points after the quarter-final:

With four away wins in the first leg, there was nothing left to chance as four teams comfortably booked their place at the DELO WOMEN’S EHF FINAL 4. Indeed, there was no surprise on the table in the away leg, with Rostov, Györ, Vipers and Metz all confirming their favourites’ status.

All four teams added a second win to clinch their berths, more or less compelling. While Rostov disposed of FTC (33:22), Györ needed 15 minutes to wake up and crush Odense (33:21). Metz handed the second tie with CSM well, coming back from three goals down in the first half to win 23:22, as Vipers took another impressive home win (25:18) against Buducnost.

It was the most lopsided quarter-final phase ever in the Women’s EHF Champions League, with the qualified teams averaging a 10.4-goal aggregate win against the eliminated sides.

With Buducnost and CSM crashing out against Vipers and Metz respectively, the final quartet is now set in stone.

Joining Györ and Rostov, who are coming back from last season’s final act, are Vipers and Metz, two newbies to the DELO WOMEN’S EHF FINAL 4. Both sides look great on the court, even more than on paper, and have great depth and enthusiasm off the bench.

Vipers combine experienced players like Katrine Lunde and Linn-Jorum Sulland with young talent of the likes of Henny Reistad and Malin Aune. And Metz rely on their defence-first approach, which confuses teams, irrespective of their powerful attacks.

Surely, Metz have not met Györ until now, but taught Rostov a lesson or two in the main round, winning both games - 29:25 at home and 26:18 away. The lack of experience in playing two crunch matches in two days could prove decisive in Budapest, but both Metz and Vipers look up to the challenge.

A transformed Rostov side

While Györ are always favourites in Budapest, despite their injury woes, Rostov look like the in-form team right now.

Coach Ambros Martin has transformed the Russian side into a defensive juggernaut, which only received 48 goals against the free-flowing, high-scoring FTC side in the quarter-final. Having Anna Vyakhireva back from an injury will also help, and right now the Russian champions are flying.

They also have a plethora of options in their side, with 12 of their 13 outfield players scoring at least a goal in the 33:22 win against FTC on Saturday. Surely, they need a bit of luck in the draw, but right now Rostov are certain to mount a challenge for their first ever Women’s EHF Champions League Final.

After an excruciating 2018, with two serious injuries to her knee, Nora Mørk finally took the court again in Györ’s 33:21 win against Odense, scoring two times. The Norwegian right back is not in top shape yet, but could prove to be an X-factor in her swansong for the Hungarian powerhouse in Budapest.

Moreover, Anna Vyakhireva’s season looked over, as Rostov announced she underwent a season-ending surgery to her elbow, only for the EHF EURO 2018 MVP to come back and score once in Rostov’s 33:22 win over FTC.

Now, the two stars have one month to prepare for the business end of the Women’s EHF Champions League and could prove decisive for their teams come May.

‘A season to forget’ should be CSM Bucuresti’s motto after their bad-luck ridden performance as one of the powerhouses that had set their eyes on the big prize.

The Romanian side could not overcome devastating injuries, which forced them to play without half of the usual starters, while Andrea Lekic was in visible pain as she tried to save CSM’s skin in the quarter-final against Metz.

Things might have been different if the Romanian champions had won against Krim Mercator and Thüringer HC in the final two games of the main round, but now CSM must set their eyes on the future. With Nora Mørk arriving in the summer and Cristina Neagu expected to sign a new contract with the side, CSM took a gamble for the future. Will it pay off?