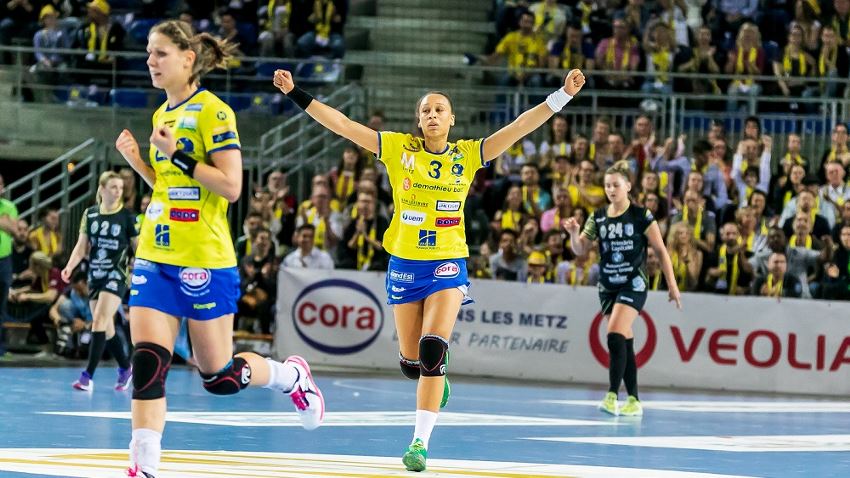 SPAIN
Bera Bera get title back after close battle

Super Amara Bera Bera, the dominant Basque team, have won their fifth title in the last six years, after a nip and tuck battle against Mecalia Atletico Guardes, the reigning champions. The two sides were ultimately tied at 46 points each but Bera Bera had won both games between the two sides, including a 22:21 away win. Blips against Malaga or Aula Valladolid were overcome by a 10-game winning streak to close the season. It was a win fortified by team spirit and grit. The top goal scorer from Bera Bera, Adriana Cardoso with 103 goals, was only 21st in the list of best scorers in the Liga Guerreras.

Madeira SAD have won every trophy available in Portugal this season: the 50th national championship, the (18th) cup, and the Super Cup. The team from Madeira did not suffer a single defeat all season long and were undisputedly superior against all rivals. Also in the play-off final against College of Gaia, Madeira won three out of three games, including an 11-goal win. Outstanding players were goalkeeper Isabel Gois; Monica Soares, who scored 171 goals throughout the season; and Beatriz Sousa, a talented right back, who recently made her debut in the Portugal national team at the age of just 17. However, the top scorer of the championship was College of Gaia’s Carolina Monteiro, with 203 goals.

FRANCE
Metz win another battle with Brest to keep their title

Metz gained their third straight national title, the 22nd in the history of the club. Emmanuel Mayonnade’s team finished first of the regular competition, with only one defeat and a 10-point lead over second-place Brest. In the play-off, Metz earned two victories against Nantes in the semi-final to take on fellow Champions League contenders Brest for the title. Metz won the first leg in Brittany by four goals, and could afford to lose the second leg by two goals. The team will undergo several player changes this summer, as Slovenian superstar Ana Gros will travel to concurrent Brest while Astride N'Gouan will make the opposite journey and French international Gnonsiane Niombla will arrive from Bucharest.

Spono Eagles captain Patrizia Ramseier lifted two trophies within three weeks. The team from Nottwil first won the Swiss cup by defeating last year’s winners LC Brühl in the final. And the Eagles also won the final series of the Swiss league against Brühl. It was the fifth Swiss championship trophy for the Eagles, and their second double. The Eagles had been dominant throughout the whole season, but defending champions Brühl started the final series victorious, winning in Nottwil. But the Eagles stroke back: they levelled the series by winning in Brühl 31:24, and then took the title following a 25:21 win in the decisive match at home.

ITALY
Salerno unstoppable on their way to second title

PDO Salerno proved that their maiden championship last year was no fluke. Salerno lifted the trophy again this season - and they did so in dominant style. After finishing the regular competition in first place, they added two clear wins against Indeco Conversano for an aggregate win of 50:30. Salerno also won the Super Cup this season, but Conversano lifted the national cup.

La Salle won three out of four possible domestic trophies - the league's regular season, knockout stage and cup - but what a close call it was. On two occasions the rulebook was needed to determine the winners. In the Women’s League, La Salle and Aloysians both finished on 30 points after 12 matches. And even though Aloysians had the better overall goal difference (+126 vs +89), the title was awarded to La Salle, as they had the better results in the direct meetings between the two teams, according to rule 3.3.4 of the Malta Handball Association competition regulations. It was La Salle’s tenth national championship.

The same rule had to be applied in the MHA Cup, where three teams - La Salle, Aloysians, and Swieqi - all finished level on nine points. Again, Aloysians had the best goal difference but the cup went to La Salle thanks to the better results in the duels against the other two teams. But Aloysians did not end the season empty-handed as they had already won the Super Cup early in the season, beating La Salle 15:12.