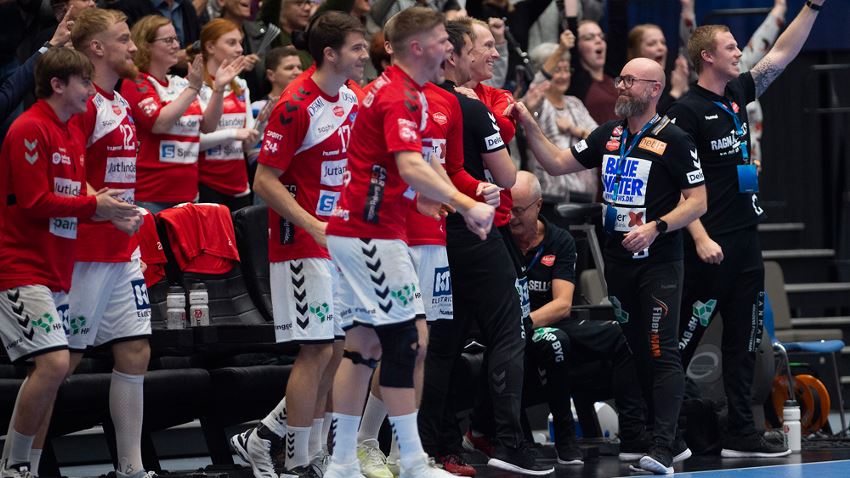 Before this round, three teams still had to take a point in the VELUX EHF Champions League group A: Zagreb, Celje and Elverum. After Saturday’s game between Barça and Paris, Flensburg had the opportunity to take the lead if they won in Aalborg, but a better second half from the hosts would deny them this chance.

The visitors were dominant for most of the first half, their defence effectively stopping Aalborg’s attack.

At the other end of the court, Lasse Svan was scoring on fast breaks while Goeran Johannessen was providing a welcome alternative with long-range shots. In consequence, Flensburg quickly took a three-goal advantage and held on to it almost to the half-time break.

Aalborg turned things around in the second half as Mads Christiansen and Sebastian Barthold managed to find breaks in Flensburg’s defence. The left wing, who was the best scorer of his team with eight goals, put the hosts ahead by four in the middle of the second half.

Despite Flensburg pushing back and evening the score with seven minutes left, Aalborg remained in control. Janus Smarason scored twice in the last minutes to give the two points to the Danish side.

Afterwards, Svan said: "I am disappointed in the team’s performance. We did not play up to our usual standards and that's been a problem for us lately."

He said Flensburg would use the upcoming break in matches to "work on some things defensively and get new energy and motivation for the upcoming challenges".

Aalborg's coach Stefan Madsen was delighted with his team.

"It was a fantastic performance for our side, and one of the best I have seen in a long time through 60 minutes," he said. "SG Flensburg-Handewitt came out with a lot of tempo and gave us a difficult time from the beginning. We knew that, and we were able to fight our way back in the match.

"Our mindset is that we can keep up with the best teams, and we did that today. For me and the whole organisation this was a brilliant victory, and I am really proud of our performance today," Madsen said.

Despite having not yet won any games in the Champions League, Zagreb kept level with Szeged for the first 20 minutes.

The turning point was the red card given to Szeged right wing Bogdan Radivojevic which seemed to fire up the Hungarian side. Even though their best scorer was now in the stands, the visitors put their foot to the pedal. With Jorge Maqueda scoring four in the first half, Szeged broke away to lead by five at half-time.

The momentum did not shift in the second half as Szeged remained firmly in control of the game.

Thanks to an excellent performance by the defence and goalkeepers, the Hungarian team were always a minimum of three goals ahead of their opponents.

When Luka Stepancic and Mario Sostaric scored back-to-back with eight minutes remaining, it was clear that Szeged were going back home with the two points.

The two teams were neck-and-neck through the first half and Elverum only once took a two-goal lead a few minutes before the break.

Sigvaldi Gudjonsson scored seven for the visitors in the first 30 minutes but that was not enough to shake Celje’s resistance. The hosts were giving everything and, led only by one goal at half-time, they could still hope for their first win of the season.

The second half was as one-sided as the first was equal.

Only conceding nine goals, the hosts broke away a few minutes after coming back on the court. Elverum’s attack looked powerless and Patrik Leban and Tilen Kodrin were using every opportunity to widen the gap for the hosts.

The maximum advantage Celje created was eight goals, which Simen Pettersen reduced to seven in the last minute.

Celje coach Tomaz Ocvirk admitted his team had problems in the attack during the first half of the match, but said: "In the second period we improved, our goalkeeper came out big and we deserved to win this one.” 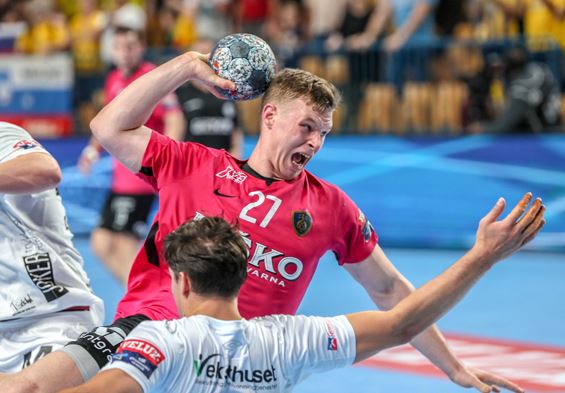