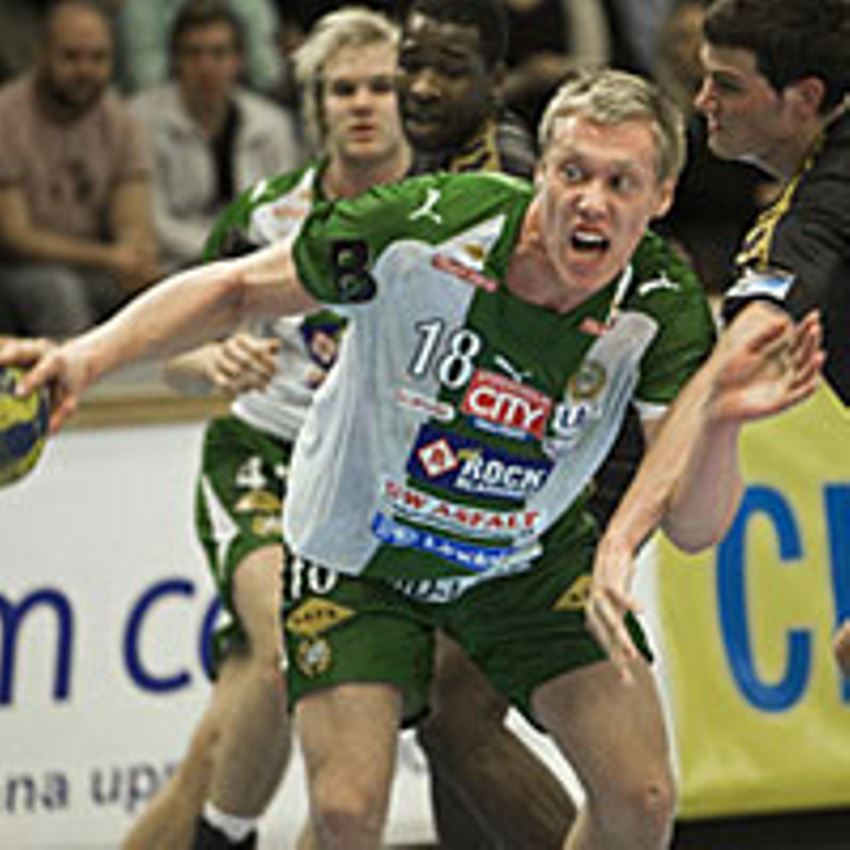 Four teams from Spain and Germany, two from France and Denmark and one from Croatia, Hungary, Slovenia and Russia: these 16 have reached the main round of the Men’s Champions League.

The last decisions were taken in the last round: Chechovski Medvedi and Portland San Antonio went on from the toughest Group E. Also, FCK and Veszprém took the last hurdle to the main round. Only three teams won all their six matches in the preliminary round: Kiel (by beating Barcelona), Hamburg and Ciudad Real.

Chambery and Ademar Leon – qualified as number ones before – lost their first points in Round 6.

The main round will start in February, right after the World Championship in Croatia, and will be played in four rounds on consecutive weekends until March. The top two ranked teams of the Main Round groups will qualify for the Quarterfinals.

Qualified for the main round: Chambery (4 points) and Celje (0)
Cup Winners’ Cup: Hammarby 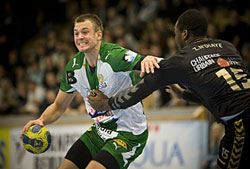 “I’m very satisfied with the performance of my players. Nothing depended on this match for either team, but our disciplined defence worked well together with a magnificent performance of our goalkeeper Robin Hallberg,” coach of Hammarby, Staffan Olsson, said after beating Chambery.

From the French side Philippe Cavalli added: “We tried some younger players today, they need to gain experience. Still, we really wanted to win, since we suffered no defeats this season so far.”

The best player was Hammarby’s goalkeeper, Robin Hallberg, who saved 51 percent of the shots. Chambery played without their top stars, Narcisse and Roine. The match was close until 15:13 when Hammarby went on to 20:15. They kept this difference until the end.

The top scorers were Jimmy Karlsson for Hammarby (5 goals) and Pierre Paturel (Chambery) with four goals. Chambery were already secure number one of the group before the game.

Even by beating Karys, Celje did not have a chance to win this group. 1 200 fans saw a close match until the 25th minute, but then the Slovenians went away to a comfortable 20:14. Celje increased the gap to 17 goals against the Lithuanians and the guests ended their “Champions League adventure” without a point. Top scorers were Toskic (9) and Terzic (8) for Celje; Cibulskis scored six goals for Karys. 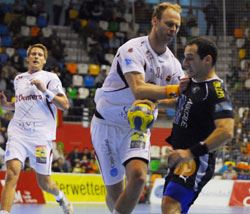 Bosna Sarajevo won the match, but GOG will go on in the top category. Sarajevo’s goalkeeper, Savanovic, was the match winner with 16 saves, but it was already known before the game that Bosna cannot reach the main round.

As GOG still missed important players, Sarajevo took their second victory this season. This was not a problem for GOG.

Medic (9 goals) and Kapisoda (8) were the top scorers for Bosna that were in the lead nearly for the complete 60 minutes. Nielsen scored five goals for GOG.

With nine goals of Torsten Laen and Siarhei Rutenka, Ciudad won their sixth match very easily. The game was decided before the break as Ciudad went away from 10:5 to 21:9. Doukas, finishing the group phase without a victory, was a toy for the title holders. Ciudad won their group with the best goal difference of all 32 clubs in the competition. The top scorer of Doukas was Hatsatourian with four goals. 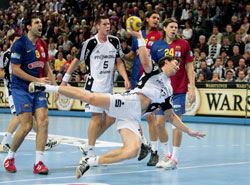 By beating Barcelona for the second time, Kiel remained on top of their group with six victories from six matches. Kiel will start in the main round with 4 points, Barcelona with zero points.

“We tried hard, but we didn’t have any chance,” Barcelona coach Manolo Cadenas said after the match.

THW manager Uwe Schwenker was enthusiastic: “If we play like we did today, every team will have big difficulties to beat us on home court.”

The match winner of Kiel was – similarly to the first match in Barcelona – goalkeeper Thierry Omeyer. The French saved a sensational 25 shots in 55 minutes. Omeyer received standing ovation when he was substituted towards the end of the game.

Skopje goalkeeper, Borko Ristovski, was the decisive figure of the match. For Drammen it was a success after receiving 37 goals in the first match in FYR Macedonia. This time they only received 25 goals. The Norwegians didn’t have a chance and finished the group without making a point. By scoring only nine goals in the first half, it was obvious that Skopje would go on to the Cup Winners’ Cup.

Qualified for the main round: Hamburg (4 points) and FCK (0)
Cup Winners’ Cup: Presov

With the outstanding performance of goalkeeper Steinar Ege, FCK left no doubt about qualifying for the main round. After a very close 33:32 in the first match in Presov, the Danes, that needed at least a draw to continue in the Champions League. With full concentration, they have beaten the Slovaks.

After 14:12 at halftime, the game was close until 16:15. Then FCK went away. But in the very last minutes – as Presov tried hard to win the match – the distance decreased. When the gap was only a goal (30:29), the Danes scored three times in a row and decided the match. The best scorers were Rajkovic (8) and Atlasson (7) for FCK and Kozlov (6) for Presov.

Though HSV had qualified as number one from the group, the Germans wanted to preserve their unbeaten record. They didn’t have problems against Belgrade.

For HSV it was the tenth victory on home court since their first CL game back in 2007. Hamburg were leading 17:10 and even as Belgrade decreased the gap to five goals in second half (30:25, 52nd min) the German victory never was in danger.

At the end Belgrade ran out of energy and HSV went away to nine goals. The top scorer of Hamburg was Hans Lindbergh with 11 goals. Milasevic scored seven for Belgrade.

“I’m satisfied with the way we played in attack, but our defence wasn’t as strong as usual,” HSV coach Martin Schwalb said.

Igor Butulija, coach of Belgrade, added: “Champions League was a school for us, a good school to learn a lot. Now we can concentrate on the Serbian league.”

Qualified for the main round: Chechov (2 points) and Portland (2)
Cup Winners’ Cup: Steaua 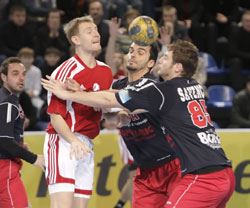 Steaua Bucuresti turned out to lose a tense rivalry in the group. After Round 4 they were still leading the table with six points, but the Romanians failed to collect more points at the decisive matches against Portland and Chechov.

Chechov started well with an aggressive defence and Steaua could only score nine goals in the first half. As Chechov still played with big concentration, the Romanian champions were eliminated from the Champions League. Chechov and Portland finish with eight points.

Portland coach Chechu Villaldea was very satisfied by reaching the Main Round with an easy victory against Koper: “Now Santa Claus can come because we’re still standing in the most important competition.” 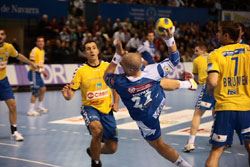 His team – missing key players – was never in danger against Koper. The Slovenians finished on the bottom of the group table.

The eight goals of Jacobsen helped Portland take an early lead and though Koper came closer in the final stage, the Spanish victory was well-deserved. The top scorer of Koper was Mrvaljevic with 7 goals.

Qualified for the main round: Flensburg and Veszprém (both 2 points)
Cup Winners’ Cup: Haukar 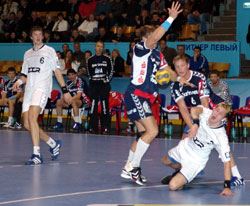 Hard work for Flensburg in the Ukraine: as Zaporopzhye wanted to take their last chance to play in the European Cup, the Germans had to give all until the last seconds. ZTR were mostly in the lead, but Flensburg were clever enough in the final stage of the match as goalkeeper Dan Beutler made important saves. But the SG defence had a lot of problems with Zaporopzhye’s top scorer, Onufryenko, who hit the net ten times. The decisive goal for the victory was scored by Lars Christianssen, top scorer with eight goals, from a penalty shot.

Veszprém needed a point to qualify for the main round after losing the first match in Iceland by 26:27. As a result, Veszprém played with full concentration and the 5 000 spectators saw a well-deserved home victory.

After the break the Hungarians showed their quality and increased the gap. The match was decided early as Haukar couldn’t stop Vujin (9 goals) and Perez (7 goals). The best scorer of the Icelandic squad was Haldorsson with five goals.

The group was decided earlier and the last match of Leon was less important. Accordingly, Zürich took the chance and said goodbye to the Champions League with an impressive victory. Led by the 13 goals of Andy Schmidt, the Swiss champions were leading most of the time. As Leon took the lead for the first and last time right after the break, Zürich fought back and decided the game at 30:26 with four minute from the end. Edin Basic scored seven goals for Amicitia.

Bregenz finished the CL season with another defeat (fifth from six matches), as Montpelier secured an easy victory. Bregenz were equal for 20 minutes before the French speeded up and took a convincing lead. The Austrians made too many mistakes in second half and the gap was just wider and wider.

Qualified for the main round: Löwen and Zagreb with each 2 points
Cup Winners’ Cup: Szeged 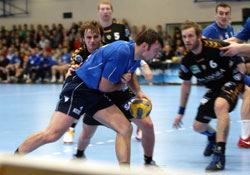 After winning by 14 goals in Plock, Rhein Neckar Löwen paved their way to win Group H. The distance from Zagreb – with the same number of points – was 12 goals before the Croatians met Szeged. The match in Zagreb was equal until the break and from this time on it was obvious that RK couldn’t become number one.

Important from a German point of view: all four German teams won their groups and now they will avoid each other in the Main Round.

Top scorer was Kiril Lazarov with 9 goals. Mirza Dzomba, who announced last week to quit the national team, was key player with six goals against Szeged.

The Hungarians had lost their chance for the Main Round long ago by losing both home matches against Zagreb and Löwen.

Their best scorer was the Romanian international Ghionea with 10 goals. The best scorer of Löwen in Plock was Jan Filip with 11 goals.