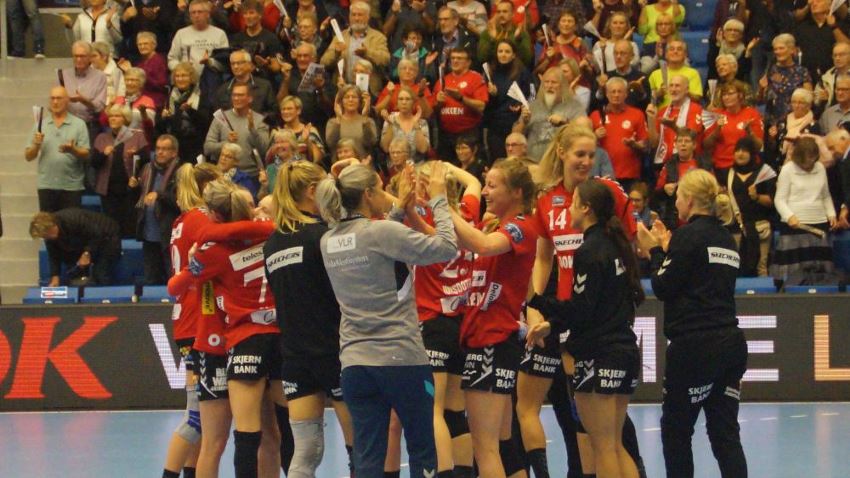 Team Esbjerg entered Saturday's match in group B of the DELO WOMEN'S EHF Champions League against Rostov-Don on the back of their first win in the group matches in 2019/20 last weekend, against MKS Perla Lublin.

Although the Russian champions were without Anna Vyakhireva – who led the scoring chart after two rounds with 17 goals – due to illness, a tough test still awaited Esbjerg at home, but the Danish side emerged with a convincing 31:26 win.

Following Rostov’s defeat at Esbjerg, CSM Bucuresti had a chance to occupy first place in group B after round 3. Seen as clear favourites in the home match against MKS Perla Lublin, the Romanian side easily won 35:19 to record their biggest ever victory in the Champions League.

Vyakhireva’s absence for Rostov-Don was felt from the very beginning, as Rostov lacked their usual firepower and only scored their first goal in the sixth minute. In turn, Esbjerg could rely on Estavana Polman, who finished as the game’s top scorer with nine goals.

In both previous matches against CSM Bucuresti and Lublin, the Danish side did much better in the second half than in the first. But Jesper Jensen and his players understood that against Rostov it was necessary to start well – and they managed it.

In the first quarter of the match, Esbjerg fully dominated on the court, scoring a number of easy goals after Rostov’s mistakes. Midway through the first half, the home side led 11:5 before Rostov took a timeout and scored three goals in a row. Yet the Danish team weathered the storm and comfortably led by five goals at the break, 16:11.

Rostov’s coach, Ambros Martin, made some changes to his team, and Kseniya Makeeva made a good impact in the second half, but her goals were not enough.

Esbjerg continued to control the game, as Polman continued to shine in attack, and Rikke Poulsen made some important saves. Four minutes from full-time, Polman made the score 29:24, and the Danish team went on to clinch 31:26 victory.

.@Team Esbjerg capped off a special day for them in the #deloehfcl with this in-flight goal – their 31st and final goal in their 31:26 win against @rostovhandballe. 😎 👏 pic.twitter.com/YY98i3811s

Team Esbjerg head coach Jesper Jensen felt that the match "was a great experience" for his side.

"We have talked so much about Champions League, and today we showed how much it means to us. We came with energy instead of insecurity, played good in our defence, ran fantastic in return, and then we had a lot of good individual performances. We showed that we can play with the best."

Despite starting the match as underdogs, MKS Perla Lublin capitalised on CSM Bucuresti's slow start and went in front several times in the opening minutes – 1:0, 2:1 and 3:2. However, it did not take CSM long to seize control of the match. Linnea Torstensson and Iulia Curea set the tone in attack, helping CSM Bucuresti to comfortably lead 8:4 by the 13th minute.

As was the case in their previous matches this season, CSM Bucuresti produced a good team performance – and goalkeeper Denisa Dedu did a fine job for her team.

After three matches, Lublin are yet to claim any points in group B. The Polish side will have to fight hard in the remaining rounds against the high-quality opposition in group B if they are to record points in this season's competition.

Leading 16:10 at the break, CSM did not relax in the second half. In fact, they scored even more goals in the second half (19) and claimed their biggest victory (16 goals) in the DELO WOMEN'S EHF Champions League. Prior to that, the Romanian team had won by 13 goals twice, 29:26 against Nykøbing and 34:21 against Metz Handball, both in 2017/18.

CSM Bucuresti head coach Adrian Vasile was satisfied with his team's win. He said: "Before the game I told the girls that this is a very big test of character for us. I am happy that we managed to keep up the good work we have done so far. I respect Lublin v they played a very good half in Esbjerg. The result on the paper looks like it was an easy game, but, in reality, we worked very hard."

MKS Perla Lublin head coach Robert Lis recognised his team's effort in defeat: He said "We tried to fight but in the end the difference was too big. The next game against CSM Bucuresti will be very tough, but we have three games in the national championship and we will try and prepare as good as we can."