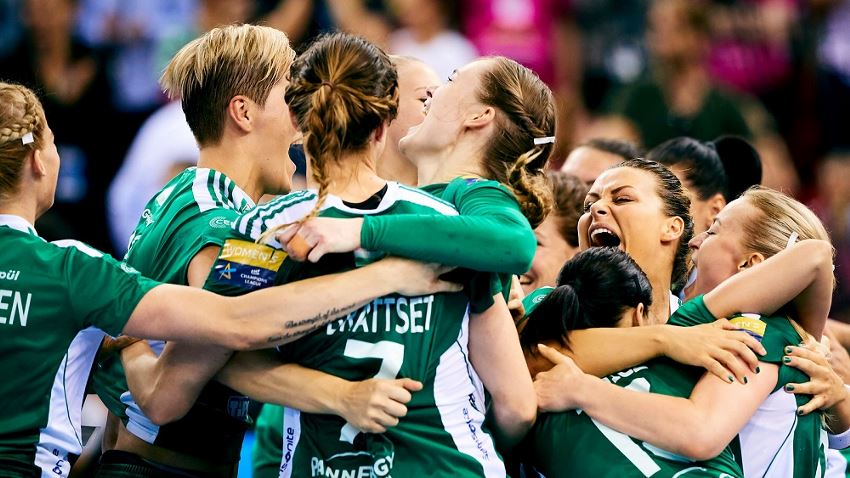 There were four games, a packed weekend and the favourites who were pushed to the edge but ultimately clinched their third trophy in a row at the DELO EHF WOMEN’S FINAL 4 in Budapest, thanks to the strength and experience of a carefully built roster.

Another Women’s EHF Champions League season is gone and Györ won the big prize for the fifth time in seven years. Let’s review the season, look into the future and analyse what went well for the winners and where the other three teams lost their chances to steal the trophy from Györ’s hands.

Resilience pays off for Györ

There were seven lost European finals for Györ before they clinched their first ever Women’s EHF Champions League trophy. But there is something in the air there that transcends handball. The Hungarian powerhouse was dealt blow after blow, but they stood up, took the hits upon their chin and looked forward. Now, they stand tall with a show of dominance exceeded only by the famous Hypo in the 1990s. After the 25:24 win against Rostov in Budapest, Györ earned their fifth Women’s EHF Champions League title in the last seven years and the third trophy in a row, a feat only matched by the mighty Hypo. The sheer strength exhibited by Györ was breathless: the Hungarian side marched to the business end of the competition without losing a game – 14 wins and two draws – and extended their unbeaten streak to a record 26 games in a row. Imagine that Györ’s last loss in the European premium competition came in January 2018, in last season’s main round, at the hands of CSM Bucuresti.

But how did they do it? It was a bit of everything: a great roster, some astute transfers - even in the winter break, and a pinch of luck that prevented any significant injuries to the key players from the roster. Moreover, Györ looked like the favourites from the get-go, despite losing head coach Ambros Martin, who assembled and inspired this team, as he moved to Rostov. There was a familiar sense in the stands before the final against Rostov, but there was no love lost between Györ’s players and their former coach. Rostov did their best, but Martin’s understudy, Gabor Danyi, who has been confirmed for next season, led Györ to a majestic, albeit nail-biting win that clinched Györ their third title in a row.

What’s next for the Hungarian powerhouse? Danyi will stay and the team will only improve, despite a busy summer. Key contributors Nycke Groot and Crina Pintea will leave, as well as Nora Mørk, a driving force, but who only made her comeback late in the season after a year out due to injury. Yet French duo Estelle Nze Minko and Beatrice Edwige look to be key additions both in attack and in defence, while the right-back position will be split between Amanda Kurtovic and experienced Katarina Bulatovic. Groot will definitely be missed as a playmaker, but Stine Oftedal looks more than capable to take over the team and inspire it with her otherworldly passes.

Martin, the driving force behind Rostov

Moving over to the teams that failed to stop Györ, Rostov look likely to be in for another season in which they can challenge for the trophy. Their ascension has been steady, with two DELO WOMEN’S EHF FINAL 4 berths in the past two years, including qualifying for the final this time. Their lack of experience was their undoing, as Ambros Martin instilled a discipline and fighting mentality that is a must for any team that sets their sights on the big prize. The Spanish coach left the Romanian women’s national team by mutual consent and will solely focus on the task at hand at the Russian side, as Rostov should retain its core for the next season, including right back Anna Vyakhireva. The loss against Györ could be a blessing in disguise for Rostov, as they boosted their experience and are not likely to make the same mistakes they did in the final this time.

From hero to zero in two days

Metz were one of the hottest teams this season, as their defensive prowess rightfully earned them a berth for the DELO WOMEN’S EHF FINAL 4. But there were signs of struggling as they disposed of an injury-laden CSM Bucuresti in the previous phase of the competition, with turnovers and missed opportunities red-flagging their challenge for the trophy. Two sharp games in two days is a challenge for any team, but playing for the first time in Budapest in front of 11,000 raucous fans can bring any team to the brink. It happened with Metz, as Emmanuel Mayonnade’s side crumbled under the pressure and failed to win a game. It was over before it even started for Metz, as they went 15:8 behind at the break in the semi-final against Rostov, after a 38 per cent shooting efficiency in the first half, which slowly became the worst half of the season for the French side. But future is looking bright for Metz, who are definitely in with a shot next season, despite their 31:30 loss against Vipers in the bronze-medal game.

Not the plucky underdog anymore

Winning the Women’s EHF Champions League in their rookie season in the modern era is a one-time feat for CSM Bucuresti, who made it in 2016, but Vipers Kristiansand failed to replicate CSM’s antics. The Norwegian champions were eliminated early last season, but came roaring this time, finishing second in the main round and obliterating Buducnost on their way to Budapest. Yet Györ were no match for the Norwegian side, who showed its limits in the semi-final, despite Katrine Lunde’s experience. Winning the bronze medal after the 31:30 win against Metz was more than Vipers would have thought before the season and hopefully for the Norwegian side can serve as a motivation for the next season, when they surely will not be seen as the plucky underdog once again.

For the sixth year in a row, the DELO WOMEN’S EHF FINAL 4 was a successful event, with fans flocking to the Papp László Budapest Sportaréna to watch their favourites in a two-day showdown. The 12.000 raucous fans that sold-out the final two days of the competition were treated to a superb show, including high quality handball, games on knife’s edge, with the emotions running wild, as another Women’s EHF Champions League season came to its close. After three consecutive years, there was not a penalty shoot-out or extra-time to decide the winner, but the MVP of the DELO WOMEN’S EHF FINAL 4, Norwegian goalkeeper Kari Aalvik Grimsbø, stopped Rostov in their tracks in the dying seconds with a superb save that brought Györ the title. Well-known American singer Anastacia wowed audiences at the DELO WOMEN’S EHF FINAL4, with an energetic show that set the mood for superb handball, as Budapest gets ready for the next season, which will see the business end unfold once again in the Hungarian capital.