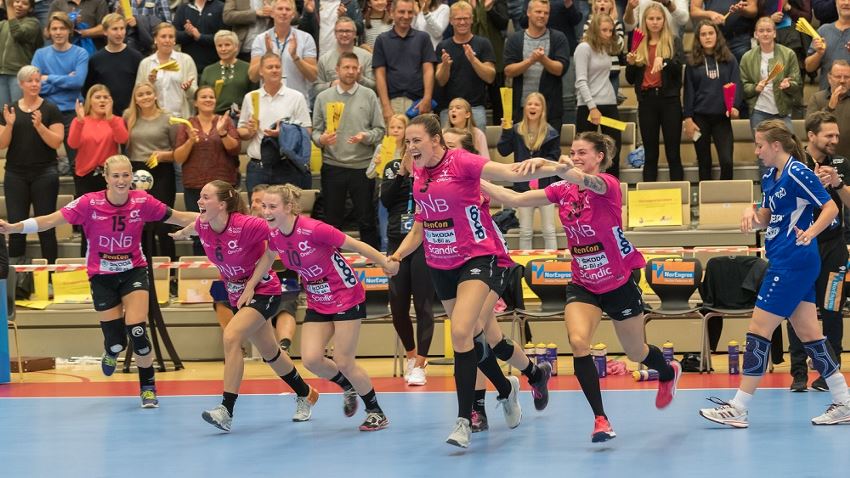 With the end of the club season comes the awarding of domestic trophies. Two of the world’s strongest domestic leagues saw new champions crowned this season, with Vipers Kristiansand ending Larvik’s 13 years of dominance in Norway, while Koebenhavn won their first ever Danish title. Across the water, London GD had a spectacular year in both the men’s and women’s competitions, as did Kaerjeng in Luxembourg.

DENMARK
New kids on the block

When the play-off finals started, it was already a fact that Denmark would see a new champion crowned. Neither Koebenhavn Haandbold nor Odense Håndbold had won the title before, and while Koebenhavn lost the final to Nykøbing Falster last year, Odense had made it their first final ever.

Having won the league, Koebenhavn had the home right in the first leg and took a 28:25 victory in a full Frederiksberghallen. On home ground, Odense then forced the series into three matches with a clear victory, 29:22.

The third leg in Frederiksberg became a thriller, with Koebenhavn securing a 26:25 win in the very last seconds.

The Koebenhavn triumph had a lot to with playmaker Mia Rej, who had a significant impact throughout the season and in the play-offs in particular – and she was obviously aware of her own performances: “I have played a divine season!” she said in a TV interview after the third and deciding final.

The final this year, in Scandinavium in Gothenburg, turned out to be a thriller, which was not decided until the final seconds. Sävehof veteran Ida Oden took the title for her club with the winning goal, 22:21.

Sävehof got the better start to the final, leading 4:1, and at half-time, they were still in front by three, 13:10. However, Höör took the upper hand after the break, holding a 18:15 lead with just over 10 minutes remaining. Sävehoft caught up again, 21:21, and in the dying seconds, Oden scored the crucial goal.

“I just saw the ball go in, and then I saw there were only two seconds left. I knew we had made it,” said Oden after the final, which was the last match in her career.

This season was historic in Norwegian women’s handball: For the first time in 13 years, Larvik did not win the league.

The club, who has been so dominant in the Scandinavian country for many years, had to form a more or less new team for 2017/18. After failing to win the league championship, the “Seriemesterskabet”, they were not victorious in the play-off either.

In both cases, Vipers Kristiansand proved too much for the traditionally top club. Vipers – who missed a place in the Women’s EHF Champions League Main Round in their maiden season but reached the final of the EHF Cup – assumed Larvik’s role as the dominant team in Norway this season.

The club from Norway’s fourth largest city won all three titles in the country this season. First, they claimed the Cup. Next, they won the league, where Larvik managed to be runners-up after a poor start to the season.

Lastly, Vipers won the play-off, in which they defeated none other than Larvik as decisively as 40:28 in the final match.

Fram were dominant where it mattered. After missing out on the league title, they secured the national trophy for the second season in a row. In the Cup final, a huge win against Haukar, 30:16, was the cherry on top of a great season.

The only title Fram missed was the top spot in the league, which went to Valur. But it was Fram who eventually had the upper hand, winning their duel by three victories to one in the final for the national title.

A lot was expected from Fram before the season, after they signed several national team players – most noticeably the captain, Karen Knutsdottir, who returned home from OGC Nice in France. Her season did not turn out the way anyone hoped, as she was badly injured in her first game back. But returning to action towards the end, she helped Fram retain the national title.

HC Neistin have been dominant in women’s handball in the Faroe Islands, but this time it was VÍF who secured the title. Winning the league by 42 points – five points clear of Kyndil – VÍF lost only one game and drew two this season. VÍF also won their duel in the two-leg final to decide the national title.

Meanwhile, Neistin, with a total of 41 titles, finished fourth out of eight and 22 points behind the champions.

VÍF enjoyed a third celebration after defeating Kyndil 23:19 in the Cup final, securing the title for the fourth time in history.


NETHERLANDS
VOC ease to fifth title and close in on record

Succes Schoonmaak/VOC and Morrenhof Jansen/Dalfsen contested the Dutch national women’s championship final for the sixth straight year. This time, there was no doubt which team deserved the title, as VOC easily decided the best-of-three series with two clear victories.

They won 29:23 in Dalfsen before taking the second match at home by an even bigger margin (31:23), thus deciding the tie before the possible third match.

It was VOC’s second national title in a row and fifth overall. They need two more to match the record of Niloc from Amsterdam, who were Dutch national champions seven times between 1956 and 1984. Some argue that VOC need just one more title, taking the 2000 championship by De Volewijckers – one of the clubs who later merged into VOC – into account.

In the end, Sint-Truiden player Sarina Leenen got the farewell she deserved. The 34-year-old left back announced her retirement from handball months ago, but she nearly missed out on the decisive play-off for the national championship against Hubo Initia Hasselt in May.

Leenen recovered from an ankle injury just in time to lead Sint-Truiden to the title. The defending champions won the first match in Hasselt 30:24, and eased to victory in the second game at home, 34:23. There was also a personal award for Leenen, who was voted Player of the Year in Belgium.

It was Sint-Truiden’s third national championship, and second double: Just like last season, the club won the league and Cup to cement their status as the current dominant force in Belgian women’s handball.

Between 1977 and 2009, there were just three seasons where HC Bascharage did not win the national women’s championship in Luxembourg. Maybe the 2017/18 title for the club, now known as Handball Kaerjeng, marks the start of another triumphant era.

The title was special to the club, as the men’s team also won the national Sales Lentz League. To make the occasion even more remarkable, the Kaerjeng women’s and men’s teams shared the same coach for the second half of the season: Dejan Gajic was already in charge of the women’s squad when he became men’s head coach halfway through the season.

Astra HC enjoyed a flawless run to the Irish league final and stood on the verge of completing the double, having won the Cup in April.

An ever-improving Dublin International, who beat UCD in the semi-final, stood between Astra and a perfect season.

The opening 30 minutes of the final was a tense affair, before Astra stepped up a gear and ran away to a 20:12 victory, reversing their defeat in the 2017 final.

London GD are truly at the top of English handball, as both the men’s and women’s teams claimed the league and Cup double this season.

After Olympia took the season’s crown last year, London GD were unbeaten en route to their title win, with two matches to spare, before they lost their final game of the season.

Their nearest league rivals, Coventry Sharks, were the opposition in the Cup final, but there was no stopping London GD as they cruised to the double with a 23:17 victory.

Tryst 77’s women continued their reign at the top of Scottish handball with another league title this season. However, they were not completely dominant and were unable to repeat their perfect record in the league.

There was also a new name on the Cup this season, as Edinburgh beat Glasgow 29:17 in the final.