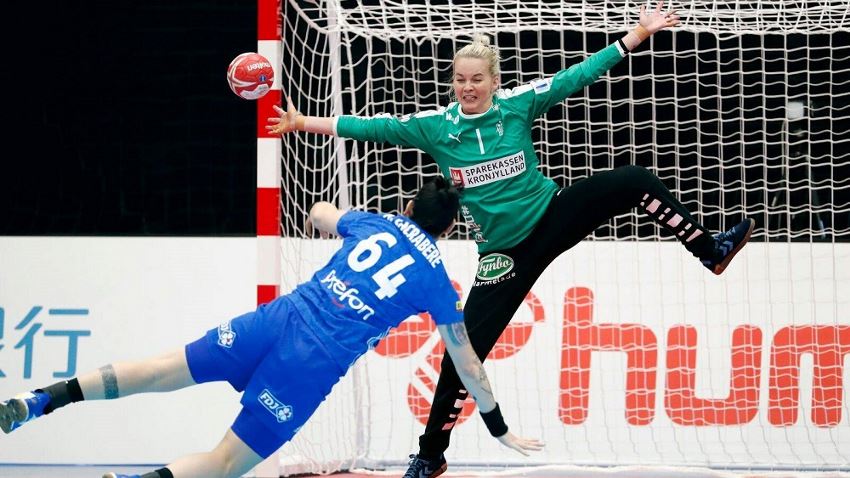 Sandra Toft will not easily forget the autumn of the 2019/20 season.

The 30-year-old goalkeeper, from the outskirts of Copenhagen, has been enjoying an uninterrupted streak of successes - with her club team as well as with the national team.

Brest Bretagne Handball signed Toft from Danish champions Team Esbjerg in the summer of 2019, and the Danish goalkeeper has played an instrumental role in the French side’s six-game winning streak in the DELO WOMEN’S EHF Champions League group matches.

Toft’s save percentage of 47 was a decisive factor

However, French handball fans might be less happy with Toft since last Friday (6 December), when her save percentage of 47 was a decisive factor in Denmark’s 20:18 win over France at the World Championship 2019 in Japan.

It was the last match for both teams in group B, a do-or-die duel. The result sent Denmark through to the main round, while France, the reigning world and EHF EURO champions, had to settle for playing for 13th to 24th place, missing out on the next phase of a World Championship for the first time in 29 years.

“I will not hesitate to rate this match as one of my biggest games, not least due to its importance,” Toft said. “Sending the world and European champions out of the race for the title was really awesome, not least as I play in the country. I couldn’t believe that we would actually be able to beat France and proceed to the main round.”

A brilliant Sandra Toft (15 saves at 47%) helps @dhf_haandbold 🇩🇰 defeat @ffhandball 🇫🇷 20:18 to take the last train to the main round in Group B! 🙅♀️ #Japan2019 #handinhand pic.twitter.com/I46riSnb5X

Toft called Denmark “a fantastic team with an amazing spirit” after the crucial win against France.

“It may have been an advantage to me that I knew the French players rather well from the French league, but then again, they also knew me,” Toft said. “Our great defence made it rather easy for me to read the French shooters.”

Toft in a stellar role again

And Denmark continued to impress in the main round. Toft starred but could not avoid a 22:19 loss to traditional powerhouse Norway, but Denmark defeated Netherlands 27:24 on Monday - with Toft in a stellar role again.

She saved 20 shots in total for a save rate of 45, and was an obvious choice for Player of the Match.

The matches against France and Netherlands were not the first at the World Championship where Toft drew the attention to herself.

With save percentages beyond 50 for parts of the games and numerous saves from one-against-one situations, Toft has been the dominating force in all of Denmark’s matches so far.

Obviously, her broad international experience, also on club level, has come in useful.

After lifting the Women’s EHF Cup with Team Tvis Holstebro in 2013, Toft went on to win the Norwegian championship with Larvik three years in succession (2015-17), and playing in the Champions League for the Norwegian powerhouse all three seasons.

And after helping Team Esbjerg win the Danish championship last season, she was ready for her second foreign adventure, this time at Brest in France.

Her career has been interrupted by a brain concussion and several knee problems, but she has come back stronger than before.

“Even though it was hard to leave Esbjerg, I am happy to have joined Brest,” she said. “The French league is a bit more competitive than the Danish league, but apart from that, the level is like what I was used to. Brest’s ambitions are as high as mine so we are a perfect match.”