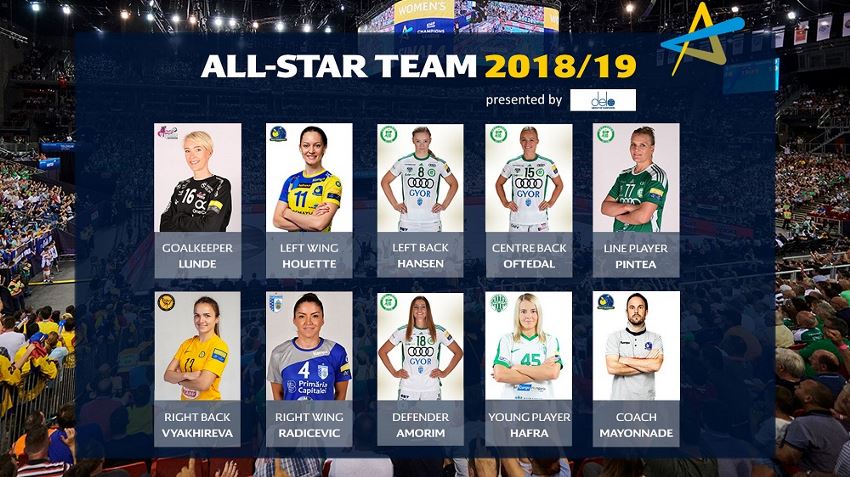 All-star Team gets fresh look in 2019

No less than eight debutants made it to the WOMEN’S EHF Champions League 2018/19 All-star Team presented by DELO Group after over 26,000 fans had their say on the best players of the season.

Rostov-Don and Vipers Kristiansand, who also reached the final tournament in Budapest (11/12 May 2019), have one player each – just like CSM Bucuresti and FTC-Rail Cargo Hungaria who were stopped in the quarter-finals.

For the sixth time the European Handball Federation organised the fan vote and 50 players were nominated to choose from. The vote ran for five weeks and generated massive interest, as thousands of fans rushed to support their favourites.

Finally, we have the completed the All-star Team at the DELO WOMEN'S #ehffinal4 ! 🙌Thanks to all of you, the fans.
Have a look at the video and tell us what do you think 😃#CSMBucuresti @MetzHandball #Győri @Fradi_HUm@rostovhandballen @VipersKrSand #ehfcl #hellobudapest pic.twitter.com/D8cGibr5cX

Tight race on many positions

Only two of the ten awarded players were part of the elite selection in previous years. Eduarda Amorim from Győr returned as the best defender after her two laurels in 2016 and 2017. Jovanka Radicevic claimed her third best right wing title; her first with CSM Bucuresti. The previous two times she took the courts for Vardar (2013/14 and 2015/16).

One of handball’s most decorated goalkeepers, Katrine Lunde, earned her maiden All-star Team award after an extremely tight ‘race’ with Amandine Leynaud (Győr). A mere 81 votes decided in favour of the Norwegian legend.

While Manon Houette from Metz Handball received most votes on the left wing position, left back awardee Anne Mette Hansen from Győr became the only player in the vote who received over 10,000 votes.

On the centre back position, two excellent playmakers of the defending champions were vying for the title with Stine Oftedal, surpassing Nycke Groot by six per cent.

The EHF EURO 2018 MVP Anna Vykhireva from Rostov-Don ruled in the right back, while the best line player of the last European championship in France, Crina Pintea from Győr, also claimed the same spot in the European top flight.

FTC prodigy Noemi Hafra, who also impressed at the EHF EURO 2018, topped all young players’ nominees, while for the first time in the vote’s history the four-time awardee Ambros Martin did not get the best coach award. The vote on this position saw a difference of just 1,400 between the first four coaches and Emmanuel Mayonnade from Metz taking the title ahead of his premiere DELO WOMEN’S EHF FINAL4.

For the first time, the nominations were made by several stakeholders, with one player in each category nominated by the competition’s coaches, Women Forum Club Handball, presenting sponsors Delo, EHF media correspondents as well as the EHF.

Every team which reached the main round was represented in the nomination by at least one player. Metz received the most nominations with eight; Rostov, Győr and FTC all received seven; Kristiansand six; four for CSM Bucuresti; three for Buducnost; Odense, Brest and Krim received two each; while Kobenhavn and Thüringer HC are represented by one player.

Profiles of the nominees:

Goalkeeper:
Katrine Lunde (NOR) - Vipers Kristiansand
•  one of the best goalkeepers in the world, with a huge collection of trophies won with both her clubs and the Norwegian national team
•  her move to Rostov-Don after five years at Hungary’s Győr was one of the biggest transfers in 2015
•  joined Vipers two years later to be reunited with her twin sister, Kristine, the assistant coach

Left Wing:
Manon Houette (FRA) - Metz Handball
•  returned to France in the summer of 2017 after a season with Thüringer HC
•  before her stint in Germany, she had only played for Fleury Loiret Handball
•  was elected best left wing in the Bundesliga in 2016/17
•  made her national team debut in 2014 and is now a regular, sharing the left wing position with captain Siraba Dembele

Left Back:
Anne Mette Hansen (DEN) - Győri Audi ETO KC
• joined Győr in the summer of 2017 from Danish runners-up København Håndbold, where she spent three seasons
• got her international break-through in the Danish national team at the EHF EURO 2014
• had large parts of her first season in Győr ruined by injuries, but is back at full strength now
• hard and effectively shooting back-court player in the attack and just as valuable in defence due to her uncompromising style

Centre Back:
Stine Oftedal (NOR) - Győri Audi ETO KC
• the star playmaker has won three EHF EUROs and a duo of World Championships since making her debut for Norway in 2010
• joined Győr in 2017 after spending four seasons at Issy Paris Hand
• individual accolades include: MVP of the World Championship 2017 and French league MVP in 2014, in addition to various other recognitions

Line Player:
Crina Pintea (ROU) - Győri Audi ETO KC
• tall, strong line player who is very difficult to defend and works well with the back court
• selected as the best line player of the French league in 2017/18
• started her professional career with HC Zalau before moving to Thuringer HC in Germany in 2015, then transferring to Issy Paris Hand in 2017
• joined Győr at the beginning of 2019, shortly after claiming the EHF EURO 2018 All-star Line player title

Right Back:
Anna Vyakhireva (RUS) - Rostov-Don
•  joined Rostov from Astrakhanochka in 2016; won the Russian league with both Astrakhanochka in 2016 and Rostov in 2017 and 2018
•  plays alongside her sister Polina Kuznetsova, who joined Rostov from Vardar before the 2018/19 season
•  2016 Olympic gold medallist and MVP of the tournament, MVP of the EURO 2018

Right Wing:
Jovanka Radicevic (MNE) - CSM Bucuresti
• as a daughter of a handball player she started playing handball at 12 in Podgorica
• most capped player and top scorer (over 750 goals) for Montenegro
• All-star right wing at EURO 2012, WCh 2015, CL 2014 and 2016
• has been a regular with Europe’s top clubs, enjoying spells with Buducnost, Győr and Vardar before joining CSM Bucuresti

Coach:
Emmanuel Mayonnade (FRA) - Metz Handball
•  at the age of 35, is the youngest CL coach in 2018/19
•  started coaching when he was 23 in Mios; a club he left 10 years later only because it suffered bankruptcy
•  appreciated by his players for his understanding and closeness
•  won two Challenge Cup titles with Mios, in 2011 and 2015