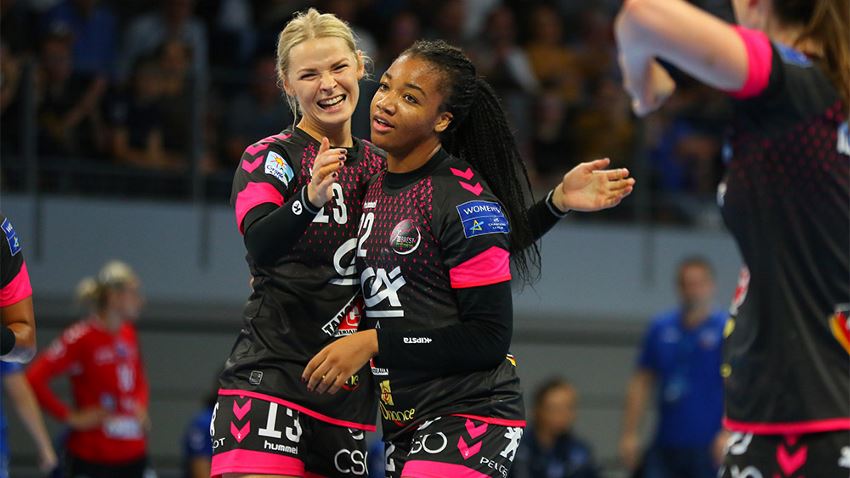 There was no question regarding the winner of the tie between Brest and SCM Ramnicu Valcea, as the French side opened the game with a 3:0 run and rode their superb attacking performance until the end, when they snatched another two points, 37:24.

It was Brest’s biggest ever win in the DELO WOMEN’S EHF Champions League, as the previous record was a 12-goal win, 39:27, against Savehof.

One week ago, SCM Ramnicu Valcea were in the zone, scoring 34 goals against Bietgheim to throw off the season with a great win.

Their defence failed to contain Brest’s attack, the goalkeepers did not make the needed saves, while Alicia Fraga Fernandez and Iryna Glibko, Valcea’s best backs were out of breath.

But not even the most confident Brest fan did not expect for their favourite team to boast a 22:9 lead after 30 minutes, as Serbian line player Sladana Pop-Lazic was unstoppable.

A 13-goal advantage was impossible to cancel from Valcea, despite left wing Ann Grete Nørgaard’s best efforts. The Danish veteran scored nine goals, but the Romanian side had nothing left in the tank, with coach Florentin Pera failing to rally the team around him, after spending one night in the hospital in Brest, due to stomach pains.

Therefore, Brest cruised to their biggest ever win in the competition, 37:24, with another superb attacking performance, after the 35 goals put past Buducnost last week.

The French side earned their second win in a row and top the table, with huge chances to progress to the next round, as a doubleheader with last-placed Lublin in the next rounds.

Meanwhile, Valcea will have to get back to the drawing board and try and stop Buducnost in the next two games, which could prove pivotal to their fate in the competition.