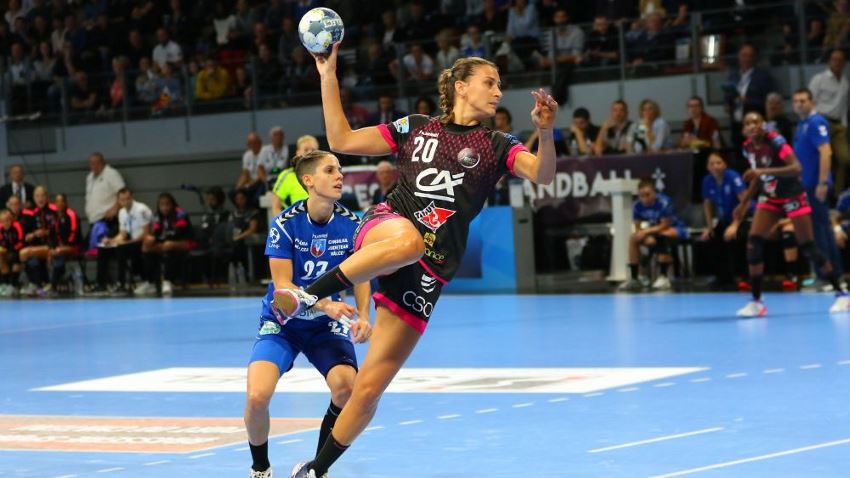 Unbeaten teams lead power rankings ahead of the main round

There has been a 10-week hiatus between the end of the group matches and the start of the main round in the DELO WOMEN’S EHF Champions League, but the 12 teams still in the competition are ready to roar again this weekend.

Only two sides start this phase with the maximum of eight points, Györi Audi ETO KC and Brest Bretagne Handball, both in group 2, while in group 1, the difference between first-placed Metz Handball and fifth-placed CSM Bucuresti is only three points.

The players have returned to their clubs after a tough World Championship in December, and we are taking a trip through the competition to see who are the in-form sides that look poised to earn a trip to the quarter-finals.

The Romanian team are the only side left in the competition that will start the main round with zero points. Valcea's only win from six games in the group matches was against SG BBM Bietigheim, and they are on a five-game losing streak in the competition.

Yet the talent is there. They have three players who won the silver medal at the IHF World Championship with Spain – right wing Marta Lopez, right back Mireya Gonzalez and playmaker Alicia Fernandez – two in-form goalkeepers, in Yuliya Dumanska and Marta Batinovic, and experience all over the court.

The Romanian side have always been a 'Dr. Jekyll and Mr. Hyde' type of team, so another wild season for CSM should not surprise anyone.

The mandatory coaching change has already happened, with assistant Adrian Vasile taking the reigns for the first time in his six-year stint at CSM. CSM's results have been fairly inconsistent, though players have missed time due to injuries. But with Cristina Neagu slowly easing back into form after being out for 11 months through a devastating torn ligament, CSM look better on paper.

They have the strength in numbers, an amazingly talented back line, but they still miss Nora Mørk, who is targeting a return in April. Will CSM still be in the DELO WOMEN’S EHF Champions League then? That is a conundrum, as they are currently fifth in the group, with only three points, and have crunch games against FTC, Vipers and Metz to play.

Inconsistency has been the main factor behind why Vipers Kristiansand only start the main round with five points instead of more.

The Norwegian side enjoyed two great wins against FTC – 31:22 and 34:29 – but showed serious signs of weakness in the matches against Metz. They lost away to Metz without a shadow of a doubt, 26:17, but made a stupendous comeback in their home game. Trailing by eight goals in the second half, Vipers earned a point in a high-scoring draw, 38:38.

They also had six players in the solid-looking Norwegian team that finished fourth at the 2019 IHF Women's World Championship in December.

Experience is key at this stage of the DELO WOMEN’S EHF Champions League and Buducnost boast loads of it. Sure, they have been a hit-or-miss team, as inconsistency plagued them in the group matches, but those problems can be addressed.

Montenegro finished fifth in the World Championship last December and they have an Olympic qualification tournament in March, so expect Buducnost to build up their form up until that point, as there are at least 10 players who can make the cut for the national team.

Boasting Jovanka Radicevic – who is the competition's top scorer with 49 goals in six games – in the team also helps. Buducnost will start the main round with four points and are eyeing their first trip to Budapest in May in three years.

The Russian side surely would have wanted to start the main round with more than five points, but a draw against CSM Bucuresti and a loss against Team Esbjerg saw them drop three points.

Their attack looked scrappy at times and there were moments in which the Russian side lost control of games that looked secure, but this could also be down to the fact that Ambros Martin has learnt from his past mistakes and wants his team to peak in the second part of the season.

Injuries have been mild and Rostov also have a big chunk of the Russian team that finished third in the World Championship, plus Dutch left back Lois Abbingh, who was instrumental in helping her team secure their first-ever gold medal at an international tournament. Write Rostov off at your peril.

Is there a hotter coach than Emmanuel Mayonnade right now? The 36-year-old French coach led Netherlands to their first-ever gold medal in the World Championship and has cemented his legacy as one of the great handball minds in women’s handball right now.

After his success in Japan, Mayonnade comes back to Metz, who were one of the three unbeaten teams in the group matches and lead group 1 with six points before the start of the main round.

There has been a change of philosophy in the French side, who are playing faster and relying more on attack and less on defence than in previous years, as they aim to make their second consecutive trip to the DELO WOMEN’S EHF FINAL4 in Budapest come May.

Brest Bretagne have been the surprise package of the competition until this point, sweeping their opponents in the group matches, including two wins against Buducnost. With their superb attacking play, Brest were the only team other than Györ to top 200 goals scored in the group matches.

Having playmaker Bella Gullden slowly eased into the line-up after a maternity break will surely boost Brest’s creativity, while the French team will expect more of the same from back Ana Gros and line player Sladjana Pop-Lazic.

Brest, who are a team rather than a group of indvivduals, can surely spring a further surprise or two, but their first main round test will also be the hardest, with the French side making a trip to the current title holders, Györ, on Sunday.

Györ’s last loss in the DELO WOMEN’S EHF Champions League came two years ago, against CSM Bucuresti in the main round, with the Hungarian side subsequently amassing an unprecedented 31-game unbeaten run.

They truly have dominated, do not have serious injury problems and boasted the best goal difference in the group matches: +69 goals, or an average of 11.5 goals per game won against Most, Krim and Sävehof.

While the opponents look a notch better than what Györ faced in the group matches, the current title holders can match any other team.

The first game against Brest will surely be an indicator of their form in 2020, but there is nothing right now that can deter the Hungarian powerhouse. As ever, they are already keenly preparing for the new season, with players like goalkeepers Laura Glauser and Silje Solberg and Hungarian right wing Viktoria Lukacs already being confirmed as transfers this summer.