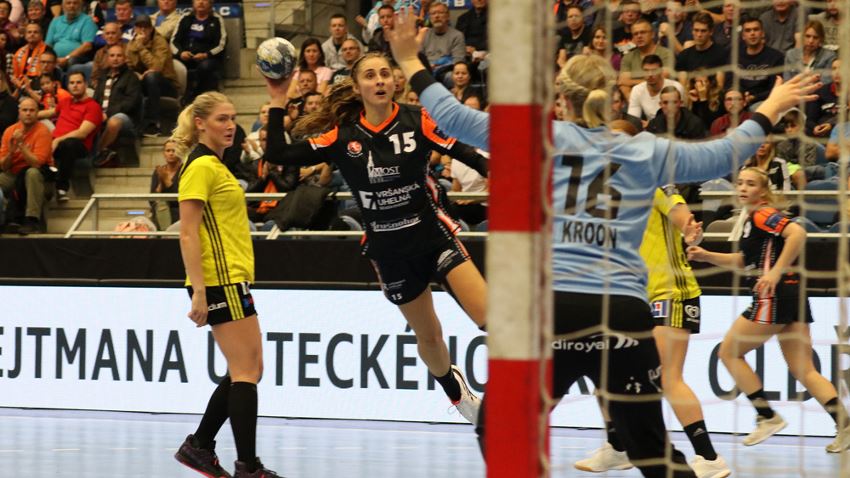 Most give away lead to draw with Sävehof

DHK Banik Most continued their rollercoaster ride in the DELO Women’s EHF Champions League as they finished their third match with a 25:25 draw against IK Sävehof.

The hosts started well, but faded by the end of the game as Sävehof fought their way back with seven goals from the unstoppable Johanna Forsberg.

Most recorded better attacking and shot efficiency, while they also had the lead throughout almost the whole match, but mistakes in the last 10 minutes cost them the win.

The game began well for Most as goalkeeper Dominika Müllnerova made a series of saves that enabled the home team to develop a three-goal lead.

Although the Swedish champions were able to break the deadlock, their efforts to close the gap were overshadowed by a shaky defensive display, which resulted in four penalty shots and two two-minute suspensions. A strong performance by Jana Sustkova and Alica Kostelna helped Most increase their lead to four goals by half-time.

At the beginning of the second half the home side were unable to score for eight minutes, but their tight defence held out and when they netted their first goal, they still led by three.

However when Most’s energy levels started to fade Sävehof, led by Johanna Forsberg, capitalised on every mistake with fast breaks and equalised with eight minutes to go. Most had the chance to decide the tie in the dying moments of the match, but Sustkova’s shot hit the woodwork from 10 metres, giving Sävehof their first point of the season.

Forsberg described the match as tough but enjoyable, adding: “I think both teams can be happy with one point."

Most coach Ondrej Vaclavek said Sävehof had simply been better in the second half.

“The Swedish team are very good shooting from long distances and it’s one of the things that we can learn from them. One point is good for both teams,” he concluded.