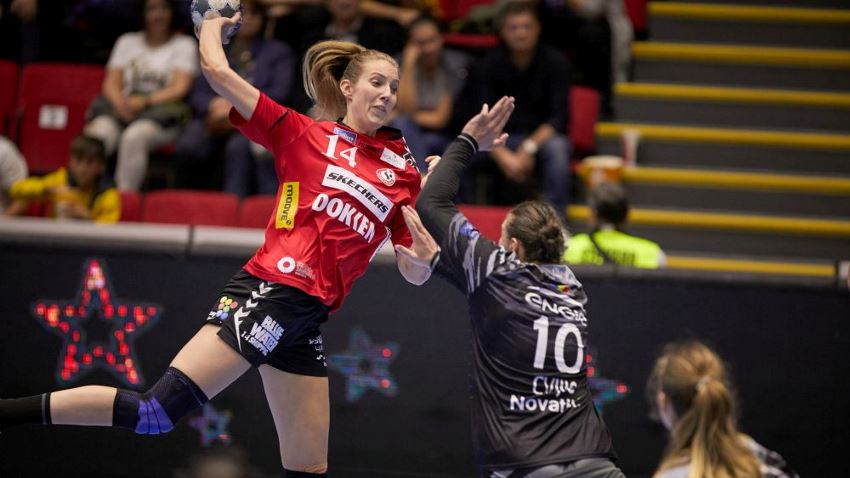 CSM Bucuresti had been the only unbeaten team in group B of the DELO WOMEN'S EHF Champions league after four rounds, yet that streak came to an end following Team Esbjerg's 25:21 away win against the Romanian side.

While CSM had booked their main round ticket a week ago, Esbjerg’s progression was confirmed on Saturday when Lublin were defeated by Rostov-Don.

However, both rivals were looking for points to carry over to the next stage, and the two points claimed in Bucharest may become very valuable for the Danish team in the main round.

Esbjerg had a better start – their 5-1 defence worked well, and goalkeeper Rilkke Poulsen made a few saves. By the 23rd minute, the visitors enjoyed a five-goal advantage, 11:6, and it was only after the second timeout taken by Adrian Vasile that his team started to catch up.

Dragana Cvijic’s impact helped CSM to draw level at 12:12, yet Line Jørgensen scored to put Esbjerg in front just before the break, 13:12.

Much of the second half featured a close fight, but the Danish team's good defence, Poulsen’s saves and goals from Sonja Frey and Kristine Breistøl
provided them with an advantage.

CSM left back Cristina Neagu played from the first minute against Esbjerg, but she scored just three of her eight attempts and still looked short of her best shape after returning from a long-term injury.

The hosts still had hopes at 21:19 eight minutes from the buzzer, yet Esbjerg killed the game off with a 4:1 run in the next four minutes and finished with a 25:21 win.

CSM Bucuresti head coach Adrian Vasile noted that his team's mistakes proved costly. He said: "We knew before the game that Esbjerg is a tough opponent. It was difficult that we started the game with 10 mistakes and it was very hard to come back."

Team Esbjerg left back Estavana Polman was surprised by her side's win. She said: ”I think it’s great that we won. I didn’t expect it. I think we have to be really proud of our win. The moment we scored our fifth goal in the second half I started to believe we could win."