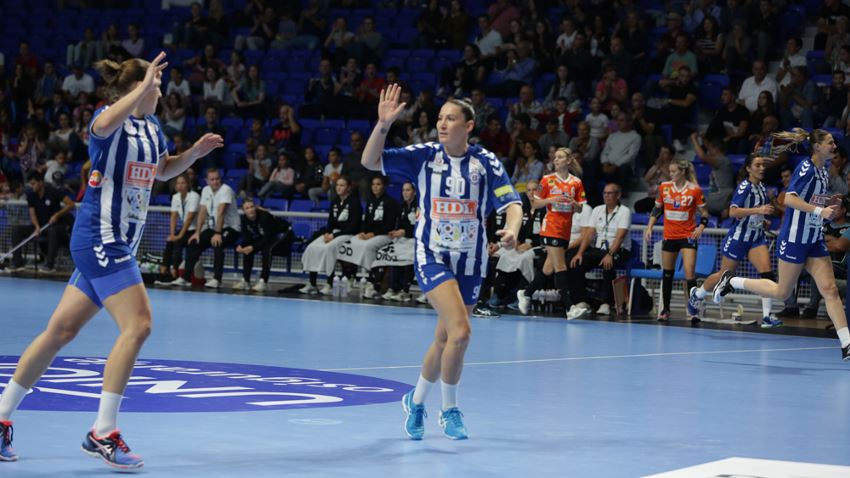 Experience and spirit proved to be decisive as Buducnost opened Group A with a 31-28 win against Danish Women’s EHF Champions League debutants Odense HC. The visitors never got any closer than being two goals down in the second half as the Montenegrin champions led all the way.

Buducnost’s spirit and Champions League experience turned out to be decisive, as the Montenegrin champions defeated the Danish Women’s EHF Champions League debutants Odense HC in the opening match of Group A.

Against all the odds, Odense playmaker Mie Højlund managed to overcome a should injury to play. However, neither Højlund or her fellow playmaker Nadia Offendal were particularly successful at finding openings in the mobile and hard-working Buducnost defence.

In the Buducnost attack, Djurdjina Jaukovic and Milena Rajcevic remained a constant threat to the Odense defence, and the home team took the initiative from the start.

Buducnost were leading all the way and had their largest lead at six goals twice around the break.

A fine game from Stine Jørgensen contributed to Odense coming back to within two goals a few times in the second half. But this was as close as the visitors got as Buducnost made no doubt about the result.

Jan Pytlick, the Odense head coach, was disappointed with the team’s performance in the opening stages of the match.

“In the first half we simply didn’t play to our top level today, and our defence was not good enough,” he said. “I am pleased with our second half, which showed me that we can do well against everyone in the Champions League.

“We now look forward to the coming match against Metz in Odense, and I am convinced that we will be better for every match we play.”