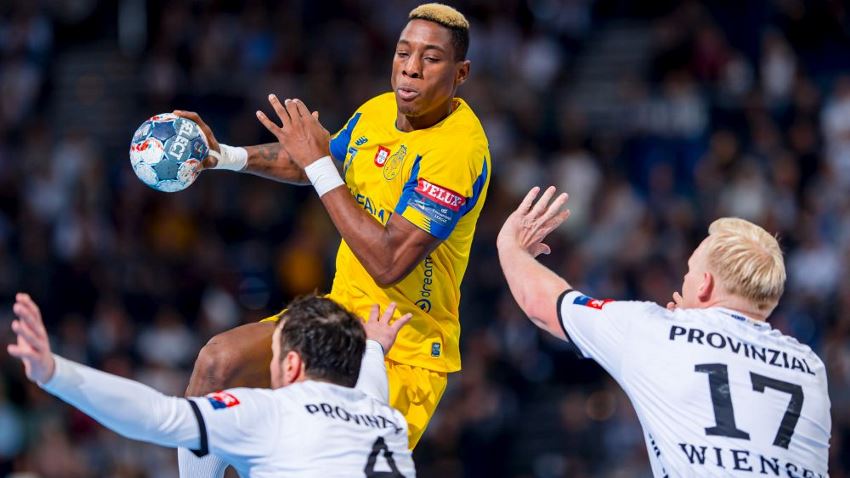 It is hard to keep a unbeaten streak alive in the VELUX EHF Champions League. Prior to Sunday's match, THW Kiel were the last remaining team with an unbeaten record in group B, but FC Porto sensationally shocked the German side, winning 28:27.

Elsewhere, Montpellier HB only held the lead twice against HC Motor Zaporozhye during the first 59 minutes, but they mounted a superb comeback to earn their fourth win of the season, 26:25, against the Ukrainian side.

The German side was riding a six-game unbeaten streak and could have improved their advantage in the standings with a win against Porto. But their start was not the best, as Porto took a 5:3 lead after 10 minutes.

With Swedish wing Niclas Ekberg in great form, Kiel took the reins and looked in control, but they could only get a 14:13 lead at the break.

Things were looking better and better for the German side as they opened a 20:16 gap, but they ultimately failed on their own sword, as their defence opened up.

Line player Victor Iturriza was unstoppable for Porto, scoring six times to cut the gap. The Portuguese side ended the game with a 3:1 run that sealed a surprising win, 28:27, and saw the battle for the first place in the group open up.

With this win, Porto are now sixth and have eight points, six more than HC Meshkov Brest. Porto's quest for a Last 16 berth is moving closer and closer as each round passes by.

Porto coach Magnus Andersson was amazed by his team's win. He said: "I couldn’t believe that we took the two points away from Kiel. My team fought like hell. We had some problems with our left handers, but we played amazing - especially in defence."

THW Kiel coach Filip Jicha was disappointed with the result, but he acknowledged Porto's performance was deserving of victory. He said "I’m really sad and a bit angry because we couldn’t reach our level during the whole match. But, to be honest, Porto did their job very well and derserved to win.

Previously winless Motor had everything to play for against Montpellier, as their future in the competition hinged on a positive result against the former title holders.

After a balanced start, a 4:0 run for Motor established by playmaker Barys Pukhouski and line player Maxim Babichev saw the Ukrainian side take a 10:6 lead.

Left wing Hugo Descat scored four times for Montpellier, but it was their defence – rather than the attack – that disappointed. With the French side leaking goals, Motor took a 17:12 lead at the break.

The defences took their turn in the first part of the second half, but with Pukhouski and Babichev in superb form, Motor kept their ground and were still up three goals, 23:19, with 12 minutes to go.

However, the game was not over. Montpellier ended the game with a superb 7:2 run that brought them the win. Gilberto Duarte, who tied the score with four seconds to go against Porto in round 6, scored the winning goal for Montpellier with six seconds to go.

What an action-packed ending to an enthralling game between #HCMotorZaporozhye and @mhbofficiel! Check out how Gilberto Duarte delivered the win for the French side with a back court 🚀. #veluxehfcl #ehfcl #ZAPMON pic.twitter.com/4n8cmr4XAq

Montpellier climbed to second place in group B with the 26:25 win, with nine points, while Motor are still last, with only one point. Montpellier will be the hosts when the two sides meet again in round 8.

Montpellier head coach Patrice Canayer said: “I am very pleased with the result. It was a great match. In the first half, we did not quite correspond to our usual rhythm. And in the second - Montpellier has become more dynamic and aggressive."