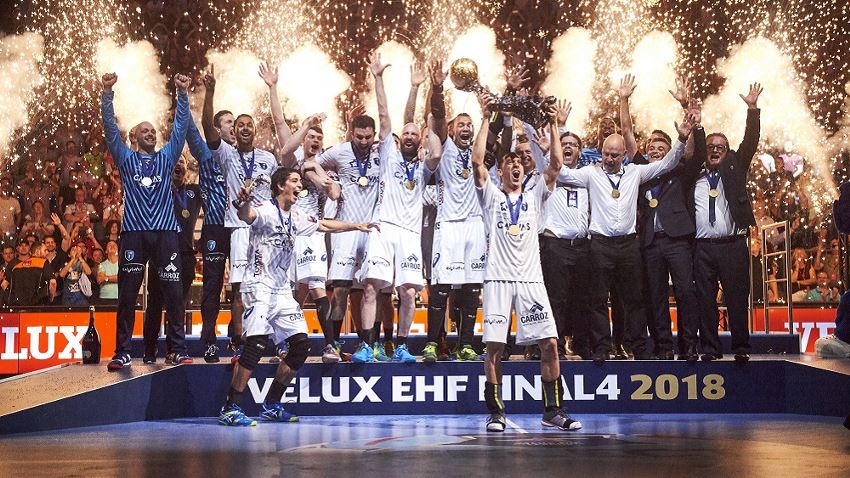 MHB fully deserved to win the unexpected all-French final of the VELUX EHF Champions League 2017/18, as they recorded a clear result of 32:27 against HBC Nantes. Coach Patrice Canayer and left wing Michael Guigou made history, as the last survivors of the club’s first title, in 2003.

Nantes stood strong for 55 minutes, before FINAL4 MVP Diego Simonet and his teammates took full control and made their fairy tale come true, travelling all the way from Groups C/D to the winners’ podium.

After Nantes took control early on, Montpellier turned a 2:4 deficit into a 10:7 advantage, which represented what was already the fourth strike from Ludovic Fabregas. Though Nantes fought hard, boosted by the great atmosphere their purple-dressed fans and the musicians created, they could not take the upper hand, and found themselves behind by three at the break.

Three factors were crucial for Montpellier’s 16:13 half-time lead: Vincent Gerard won the goalkeeper duel against his national teammate Cyril Dumoulin, MHB’s defence managed to stop Nantes’ usually high-scoring line player Nicolas Tournat and, at the other end of the court, their line players Fabregas and Mamdouh were unstoppable, scoring seven goals in the first 30 minutes. In addition, Argentinian back-court ace Diego Simonet was on a high, either scoring goals or making assists.


When the match resumed, it took Nantes only four minutes and three goals from Norwegian Espen Lie Hansen to level the result at 16:16. Montpellier were a little shaken, but cheated the gallows quite quickly, as they did not allow Nantes to take the lead, instead creating another three-goal lead that forced Nantes coach Thierry Anti to take a timeout.

Anti’s players made use of his advice, while Montpellier decreased their level in attack. Simonet and Truchanovicius missed some great chances, which HBC took advantage of, equalising again, 24:24, nine minutes before the end.

Exactly this moment was the wake-up call for MHB: Within two minutes, the 2002/03 and 2017/18 Champions League winners netted four times, while Nantes were too nervous in attack, missing five chances in a row. The MHB fans were shaking the arena, shouting “Allez, allez Montpellier”, when Simonet scored his fifth goal for 29:24 with less than three minutes remaining.

Finally, the team and their fans knew that they made it again when Vid Kavticnik netted on a penalty for 30:25 and Gerard saved the next HBC attack. Coach Patrice Canayer and his stars were jumping in front of the bench more than one minute before the final buzzer. Nantes were fair losers, congratulating the new Champions League winners on court as they waited for the whistle.

"This is the satisfaction of work during the whole year," Simonet said. "We showed this evenig that with hard work, it is possible."

And Montpellier left back Mohamed Soussi added: "We really deserved this title. We didn't expect it at the beginning of the season. Then we won against Barcelona, Flensburg, Vardar. And today we said: we win or we win."

Right back Vid Kavticnik called the VELUX EHF FINAL4 "the most intense weekend you can have. I don't have any words for what happened here. I did it, I won the Champions League again after 11 years and I feel so happy, it's crazy!"

Nantes captain Rock Feliho was obviously diappointed: “Playing in a final, you want to win the title for sure. We left too many chances, we made too many mistakes. Maybe we have been a little bit too nervous in that situation.”