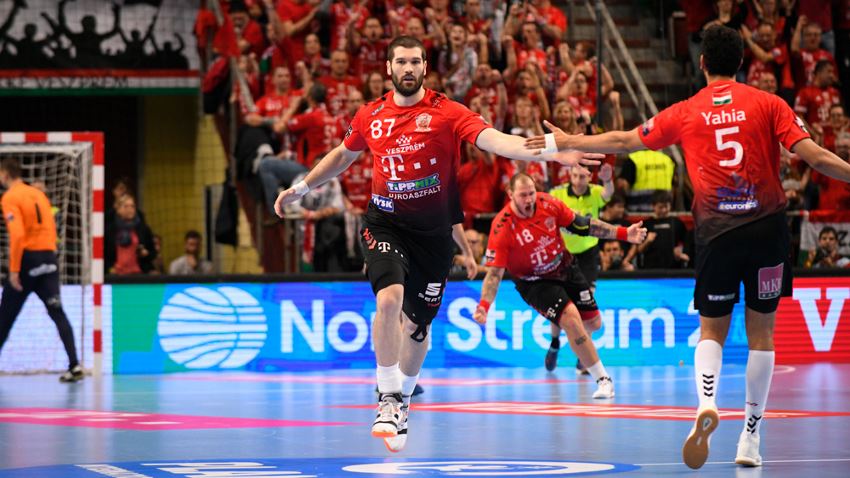 Last week’s loss against Kiel meant that Veszprém could not win the group, but they bounced back and secured the second place with a 24:23 win against Montpellier.

Veszprém will play against the winner of the Orlen Wisla Plock - Bidasoa Irun knockout in the Last 16 phase. Plock won the first leg, 32:25

Back Kyllian Villeminot had a bright start to the game, scoring Montpellier’s first three goals, but the Hungarian hosts quickly turned the game around.

With their superior attacking prowess and Serbian right wing Dragan Gajic in superb form, Veszprém cruised to a 8:5 lead after 14 minutes, with their attack looking unstoppable.

But a time-out taken by Patrice Canayer at the right moment spurred a 6:2 run for the French side, putting Montpellier back in the lead at 11:10.

Veszprém’s sharpshooters Vuko Borozan and Petar Nenadic had an off-game in the first half, failing to score one goal between them. It was up to Gajic, who scored six times in the first half, and fellow wing Manuel Strlek to keep up the pace and lead the hosts to a 16:14 lead at the break.

It was a lead that Veszprém never relinquished. Despite Montpellier trying to tie the game, they failed to cut the gap to more than one goal throughout the second half.

The French side did slow down Veszprém’s attack, as their strong defence managed to clamp down the pressure, but the hosts still found new ways to score.

Borozan, Nenadic and Egyptian right back Omar Yahia scored five times in the second half, with the Hungarian champions’ attack efficiency cut from 65 per cent in the first 30 minutes to 51 per cent at the end.

The two sides only scored 17 goals in the second half, as both goalkeepers excelled. But it was Veszprém who stole the win, 24:23, to secure second place in the group.

Veszprém coach David Davis described the match as "almost the most complicated match" in his tenure, saying his team had difficulty playing their formations.

"The defence was good, and we were fighting a lot. Arpad Sterbik was brilliant. It was clear that we wanted to win this game because of the important points," Davis said. "Although we won, there is a lot to improve."