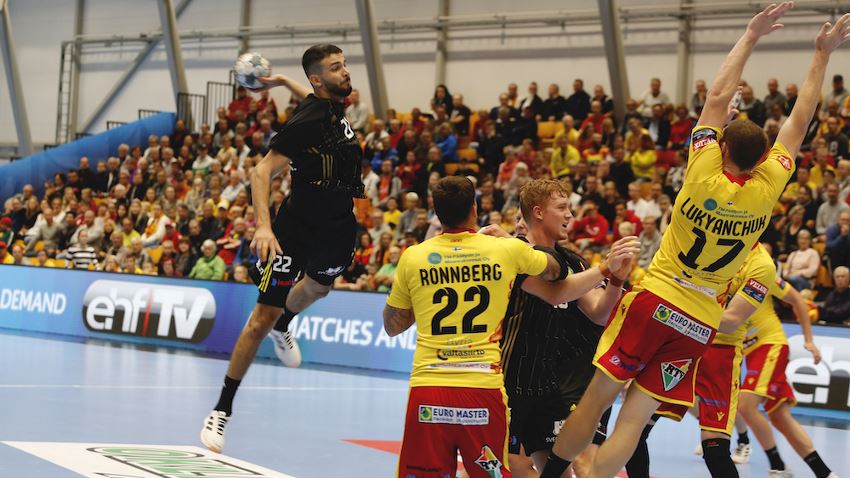 IK Sävehof marked their return to the VELUX EHF Champions League after a six-year absence with a victory over Cocks in the competition’s opening match on Wednesday.

The Swedish champions spoiled the party for the Finnish home side, who were playing their first competitive match in their new Cocks Arena.

With a new arena and a strong crowd behind them, Cocks were hoping to make a flying start to the new season with a win in their very first Champions League match in Riihimäki.

For the opening 10 minutes of the clash, there was little to choose between the Finnish and Swedish champions as they traded goals, but then came William Bogojevic. The 22-year-old came to life and was unstoppable, scoring six goals in the first half, which proved the difference as Sävehof opened up an 18:13 lead for the break.

A rejuvenated Cocks side were expected to return in the second half and it briefly looked as if the break had helped, as captain Teemu Tamminen scored the opening two goals of the period to bring his side back within three.

However, that is as close as the hosts would get, as the Swedish club remained disciplined at both ends of the court. The visitors frustrated their opponents in attack and converted simple chances of their own to extend their lead to seven goals, before finishing with a 30:25 win.

“The fight was good, but altogether is was not such a good match from our side. We knew the strengths of the opposing side, but could not stop them. Also, the goalkeeping today was not on the level that is needed in order to win matches in Champions League,” said Cocks coach Gintaras Savukynas. “Like last season, we gave too much advantage to the opponents in the first half. There are certain points in our play we need to analyse and do better in the upcoming matches.”

This victory marks a successful return to Europe’s premier club competition for Sävehof, and is all the more impressive considering player-coach Jonas Larholm left the club exactly one week ago.