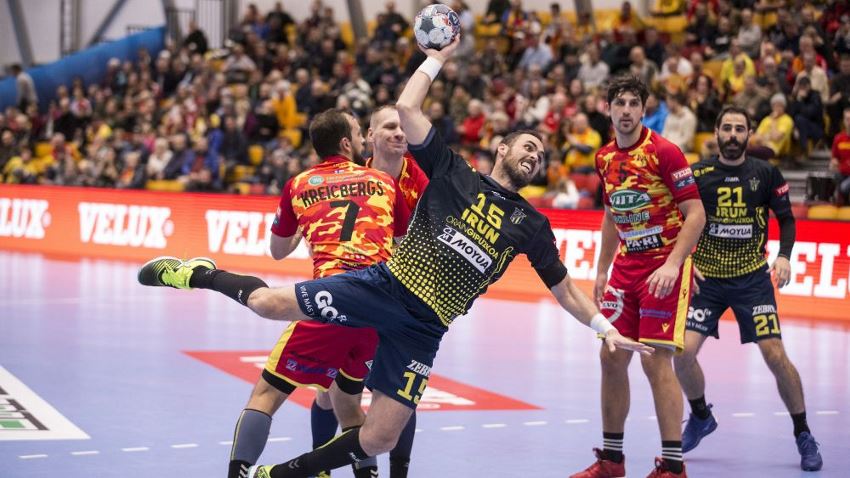 Bidasoa Irun were the first team to progress from group C of the VELUX EHF Champions League, thanks to a confident win away to Cocks, coupled with Sävehof’s loss to Eurofarm Rabitnik.

Sävehof’s loss in Bitola means they remain a point behind Sporting in the race for the second spot in the elimination round.

After Sporting won their midweek clash against Presov, Sävehof know they needed victory in Bitola to regain control of second place on Sunday.

The Swedish club broke Rabotnik’s hearts in the reverse fixture, turning around a five-goal half-time deficit to snatch victory with a brilliant defensive display. Both sides dominated one half each then, but there was little to choose between them early in this clash as Rabotnik kept their noses in front in a tight opening 20 minutes.

Sävehof travelled to Northern Macedonia with just 13 players, but those who travelled gave a good account of themselves, bouncing back from going 12:9 down as 18-year-old right back Emil Berlin levelled the scores with his second goal of the day. However, the hosts produced another goal flourish as the end of the half, mounting a 6:0 run and a 18:12 lead at half-time.

The home side’s top scorer this season, Vladislav Ostroushku, had his least productive game of the campaign when these sides last met with just two goals, a feat he had already eclipsed in the first half, but while he and his side continued to score in the second half, their defence completely shut down.

Sävehof hunted their hosts’ lead with purpose and five goals in quick succession from William Bogojevic helped draw them level with eight minutes on the clock.

Bogojevic’s ninth goal of the day looked certain to give the guests a point in the final minute of play, but Rabotnik’s Mirko Radovic had other ideas, firing in a standing shot right before the final buzzer to secure a 32:31 win, just their second of the season.

Rabotnik head coach Stevce Alushovski said: "Congratulations for the win, but it was very difficult – the same story all season. We lost our heads in the second half and players didnt play with tactical details like we prepare before the match. But, in the season like this, with all of these injuries it's impossible to say some bad words for them."

Irun’s late comeback to claim a point against Presov last week would have given them confidence, but a wake-up call as well, reminding them that nothing can be taken for granted at this level.

Irun humbled Cocks back in round 2 with a 15-goal victory and a similar result appeared to be on the cards as the Spanish club raced into a 3:0 lead after five minutes.

Cocks came into this clash on a two-game winning streak in home matches, but that form appeared to desert them as it took almost nine minutes for Teemu Tamminen to score his side’s opening goal.

Irun’s right wing Kauldi Odriozola enjoyed himself in the first half, scoring four goals as his side opened up a 11:7 lead, which was slightly narrowed to 12:9 by the break.

After a tight start to the second half, it was the turn of experienced left-back Leo Renaud-David to take over, scoring four goals in the third quarter as Irun opened a 20:14 advantage.

The guests never looked back from there, going on a 6:1 run to extend their lead to 10 goals, which they held onto until the end, sealing their place in the elimination round.

Bidasoa head coach Jacobo Cuetara said: "We played a good game altogether, especially in the second half. We knew that Cocks had many injured players and that began to show after the break. I am pleased with the result today."

Cocks head coach Gintaras Savukynas said: "We had a lot of issues before the match. Players are out and some are not fully fit - especially thr playmakers. We were handicapped but kept in the game for the first half. We talked a lot about discipline, but lost a little bit of that after the break. I Still have to thank my boys, they fought well as long as they had energy left."