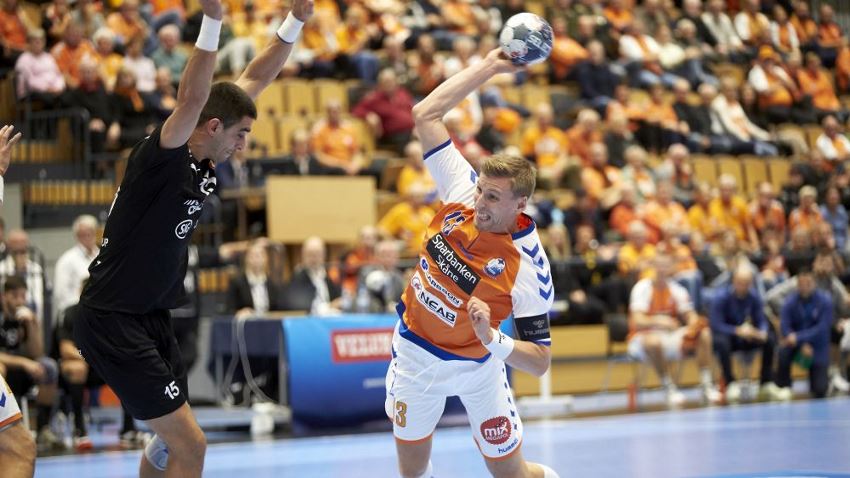 Before this game, Kristianstad had not taken any points while Schaffhausen had two points. Meaning that this fourth round confrontation was already important with the play-off qualification in mind.

The Swedish side was on the verge of losing tonight again but, thanks to a powerful defense, managed to come back in the dying minutes of the game.

Having problems starting games well has become a trademark for Kristianstad this season. Never, before tonight’s game, had the Swedish side reached the break ahead on the scoreboard, and tonight was no different.

Even worse, Kadetten had taken the lead early on, with a five-goals advantage after less than ten minutes. Olafur Gudmunsson, the hosts’ usual offensive weapon, was struggling to put the ball into the net, as he had scored one of his six shots in the game. The Swedish side gradually took back the reins, stabilizing the gap thanks to Alfred Ehn, meaning that at half-time, they were only down by four (11:15).

Despite Gudmunsson finding a way back to the net in the second half, it didn’t mean Kristianstad were able to come back on the scoreboard. Gabor Csaszar were handling Schaffhausen play effectively, scoring from long range but also finding neat passes with his lineplayers.

But just as the visitors seemed to cruise to victory, the hosts threw everything they had and started to come back. Strengthening their defense in front of an efficient Richard Kappelin , the hosts didn’t take one goal in the last ten minutes.

Back on track, Kristianstad relied on Gudmunsson and Henningsson to narrow the gap. One minute before the end of the game, the Icelandic left-back equalized at 24 and even had the opportunity to give his team the win, but his last shot was blocked.

Kristianstad Coach Ljubomir Vranjes was pleased with the comeback but also wanted more: “We did a fighting game with too many mistakes but we are happy for the first point”.

Meanwhile, Kadetten Coach Petr Hrachovec was frustrated with the difference in quality in the second half: “It is with a mixed feeling we leave the game today with two complete different halves”.