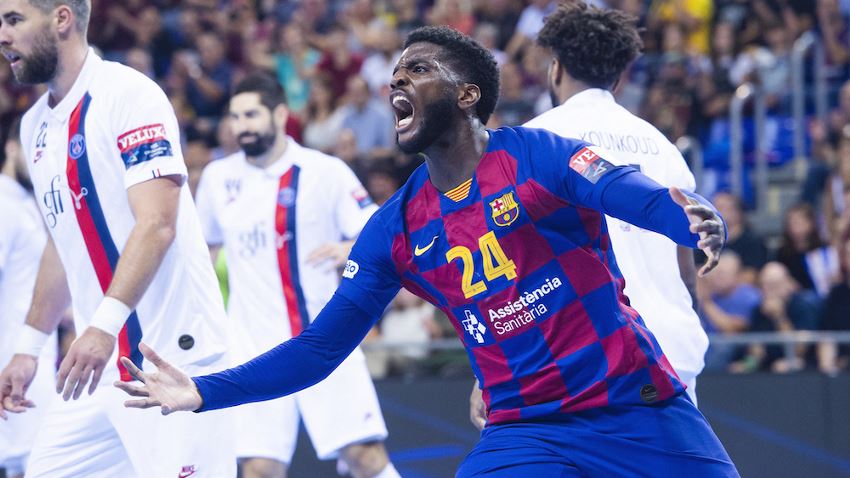 A tough fight was on the cards at Palau Blaugrana on Saturday night. Paris Saint-Germain HB had the maximum of eight points after four rounds prior to the clash in Barcelona, while the home side had been gradually getting better after their initial loss in Szeged.

Without Henrik Toft Hansen and Mikkel Hansen, both suffering from concussions, as well as Kim Ekdahl du Rietz and Sander Sagosen, Paris looked somewhat weakened. It might not have shown in the first half, but in the end, Barça had more manpower and managed to take their fourth straight win.

“For us it was a very important match and we’re very happy about how we played,” said Barça coach Xavi Pascual. “I’m really proud – it was quite complicated, but we worked for 60 minutes non-stop.”

Despite being without Sander Sagosen, Mikkel Hansen and Kim Ekdahl du Rietz, three key players on the back court, Paris played level with Barça during the first half. The French side could rely on the efficiency of Gudjon Valur Sigurdsson, as the left wing scored four times in the first 30 minutes.

Although they tried to play as fast as possible, the hosts could not shake off their opponents’ resistance. In fact, Nedim Remili gave the first two-goal advantage of the game to PSG in the 23rd minute.

But the momentum at the end of the first half was clearly in favour of Barcelona. The hosts turned things around and, thanks to last-second goal by Dika Mem, went back to the dressing room leading by four.

The break did not help PSG settle their problems, as you could clearly feel that the French side’s players were struggling physically. With less bite in attack, Remili and Nikola Karabatic could not find their way past Barça keeper Gonzalo Perez de Vargas anymore.

The Spaniard was elemental for Barça in the second half, as his team gradually increased their lead. Just after a timeout for the visitors, Aleix Gomez scored his sixth goal to take the hosts ahead by eight, 30:22, with 11 minutes to play.

PSG did everything they could to narrow gap – and they managed to, coming back within four as Luka Karabatic converted passes from his teammates. That was not enough for the win however, as Mem and Gomez did what they had to in the dying seconds to secure the two points for Barça.