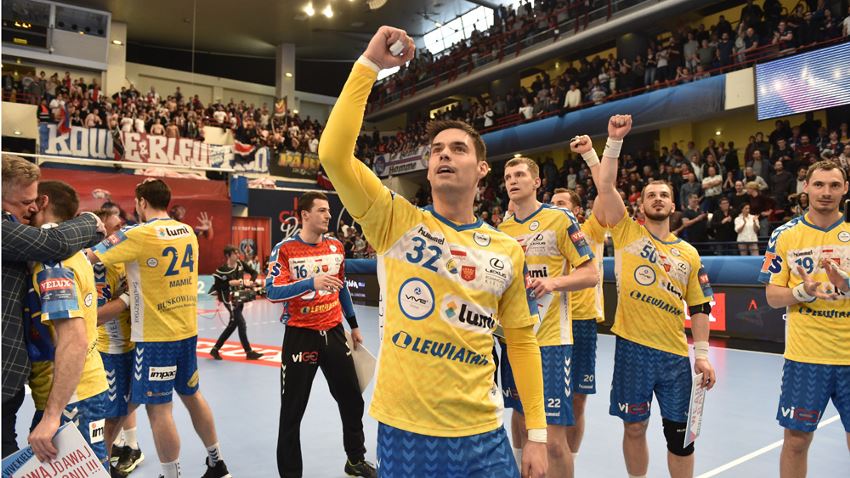 Turning over an advantage of 10 goals is something that had only been seen three times in the history of the VELUX EHF Champions League, but home side Paris Saint-Germain HB nearly added a fourth time this evening as they sought to get the better of PGE Vive Kielce in Paris.

After losing the first leg in Poland 34:24 last Saturday, Paris were close to creating a sensation as they led by 11 with the same number of minutes remaining, but the visitors kept their heads up and managed to come back into the game, finally losing by nine - but it was enough to qualify through to Germany for the visiting team.

The atmosphere inside the Stade Pierre de Coubertin in Paris was red-hot right from the start of this clash, with the locals knowing PSG had to recover at least a 10-goal advantage - or 11 if Kielce were to score more than 24 away goals.

And the hosts started in very good fashion, leading by three after just five minutes. Their attack was relentless, speedy and precise, while goalkeeper Rodrigo Corrales was stopping shots between the posts. The attack was led by Nikola Karabatic, leaving Kielce without any solutions to the problems with even the normally-reliable Alex Dujshebaev left quiet.


Thanks to Mikkel Hansen and his last-second goal, Paris were up by seven at half-time, 18:11, and the dream of the VELUX EHF FINAL4 was on.

But Kielce, who had not returned to Cologne since winning the title back in 2016, did everything they could to not let the game get out of sight after the break.


Luka Cindric kept his team in the game with magic goals, but on the other side Nedim Remili was on another planet. The left-hander scored 10 in the second half alone and thanks to him, Paris were ahead by 11 goals in the 49th minute – if the game had stopped then, Paris would be on their way to Cologne and Kielce would be staying at home.

However, a bad substitution changed everything, with Hansen taking a two-minute suspension which helped Kielce back into the game. Dujshebaev then scored two important goals while Paris missed two shots in the last 10 minutes, with the rebounds falling back into the visitors’ hands.

When Uladzislau Kulesh scored the goal to put his Kielce team just eight goals behind (34:26) with less than one minute remaining, it was clear the 2016 champions were the ones going to Cologne.