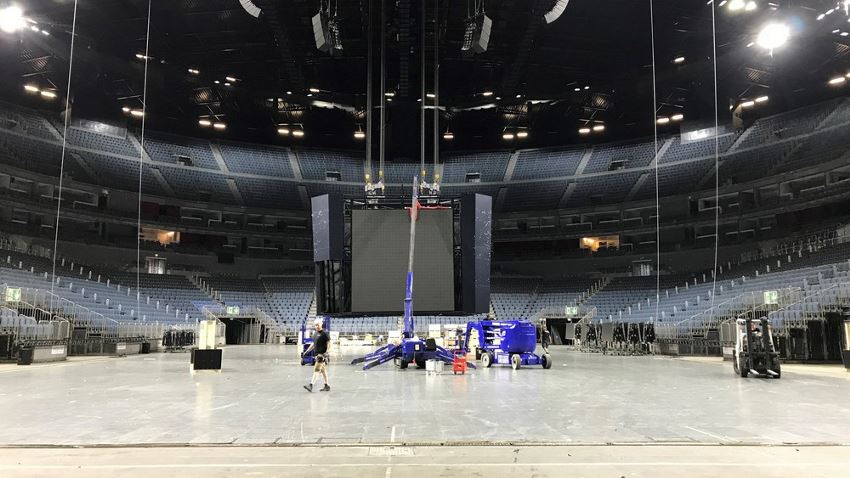 The impressive video cube – each of the four sides measure 5.2 x 5.2 metres and the entire construction weighs 19 tons – inside LANXESS arena has seen handball champions come and go.

Used for the first time in earnest at the Men’s World Championship 2007 when Germany won handball gold, it has also displayed the most monumental match scenes and been a core part of almost every opening show ever since the first VELUX EHF FINAL4 in 2010.

Back then, it was said to be the biggest and most modern video cube in Europe.

However, when the 2020 edition of the EHF FINAL4 throws off on 30 May next year, the cube will have become a part of arena history and been replaced by something bigger and better.

These days, the old cube has been lowered to the arena floor; the screens were dismounted, the supporting steel structure behind them was taken apart – and when all this has been finished and a new supporting structure, four new video walls will be installed.

Each new wall consists of 80 individual panels. Each wall will measure 8 x 4.5 metres and will thus be nine square metres bigger than one side of the old cube – and feature a visibly improved resolution.

Furthermore, the four new video walls can be moved individually and will bring all the action much closer to the spectators inside the arena.

At the same time, LANXESS arena, at the height where the first hospitality boxes are located, will be equipped with a new ‘LED ring’ running all around the arena, equalling of total of 302 metres in length.

For all handball fans wishing to be part of the VELUX EHF FINAL4 2020, there is the opportunity to put your name on a waiting list to be among the first who are informed about future sales phases.