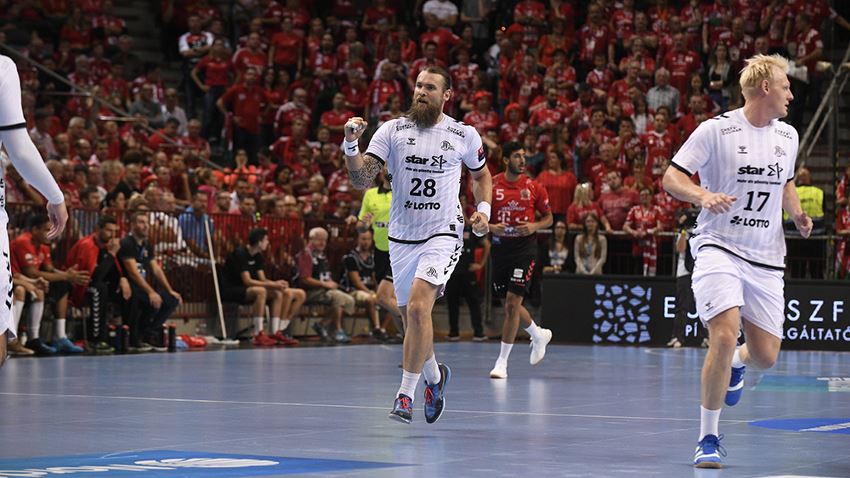 Filip Jicha was denied his first VELUX EHF Champions League win as a coach in the last second against Kielce last Sunday, but led his team to the most impressive display of the season, as Kiel started with a 3:0 run the Match of The Week against Veszprem and never looked back.
The German side are now first in the group, undefeated in the first two rounds, while Veszprem, one of the favourites to finally win the trophy this season, have to go back to the drawing board and think about what went wrong.
GROUP B
Telekom Veszprem KC (HUN) vs THW Kiel (GER) 31:37 (13:16)
Veszprem came into the game as big favourites this season after ticking all the boxes last week against Motor in a superb 40:28 win, but were left stunned as a 100-second 3:0 run from Kiel meant that the German side were in business.
It was an unstoppable series for line player Hendrik Pekeler, who scored four goals in a row for the guests to put Kiel in front, 5:2, after nine minutes.
A force to be reckoned with in attack, Veszprem easily tied the game, 6:6, but it was another Pekeler goal that put Kiel back in front with a three-goal advantage, 9:6, after their second 3:0 run the German side boasted a 69 per cent shot efficiency.
Both teams amped up their defences, but while former Kiel player Rasmus Lauge Schmidt entered his stride as a playmaker, Veszprem failed to capitalize on their chances. Five superb saves from goalkeeper Niklas Landin kept the Hungarian side at bay and helped Kiel take a 16:13 lead at the break, after their third 3:0 run in the first half.

With a volcano behind them, Veszprem seemed to fail to stop the offensive juggernaut the guests provided, as every mistake from the Hungarian side was punished by Kiel, with Norwegian right back Harald Reinkind in superb form, with eight goals scored in the game, which got him the Player of the Match award.
Kiel had last round’s game against Kielce in mind, when they tied despite having a two-goal advantage with 54 seconds to go, and pushed the pedal to the floor, creating a five-goal gap, 27:22, as the clock was ticking.
There was nothing that Veszprem could do to stop Kiel from scoring, as the German side rode a 63 per cent attacking efficiency to seal off an outstanding 37:31 win against one of the challengers for the trophy.
Author: Adrian Costeu / JS
Tweet