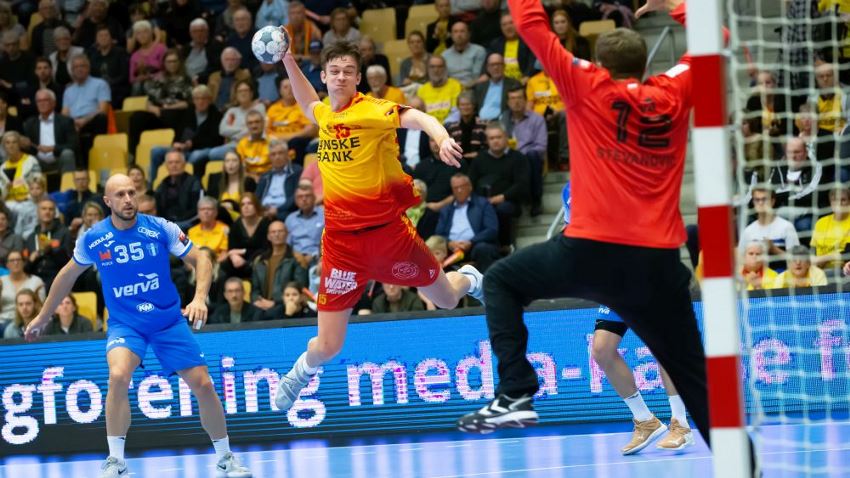 45-year-old goalkeeper Soren Haagen made the decisive save for GOG in their VELUX EHF Champions League group D match against Orlen Wisla Plock on Sunday, with the hosts emerging victorious 28:27 in a match that was a direct battle for second place in the group.

The thrilling finish concluded what was an entertaining match with many spectacular goals.

After a thrilling game with many spectacular goals, 45-year-old Soren Haagen's save from Konstantin Igropulo’s shot with four seconds left secured GOG the win in the battle for second place in group D.


A fast-paced GOG team made the better start and held an early 4:1 lead, but Wisla Plock responded and gained the lead at 7:6. The home team were quick to take back the initiative and led by two goals at half-time.

Take a bow, Emil Jakobsen! Check out how @GOGsport's left wing scored this superb in-flight goal in the first half against @SPRWisla. #veluxehfcl #ehfcl 👏 pic.twitter.com/iYDA6XYcwZ


Alvaro Sanchez was sent on by Plock from the start of the second half, and the Spanish playmaker’s introduction meant an improvement to the Polish attack, until the Danish defence had read his way of organising the visitors' attacking play.

At the other end of the court, GOG still did not have much trouble with the Plock defence, which started in a 6-0 formation and then moved forward to an almost 3-3 formation.

With GOG remaining ahead by one or two goals in the latter stages of the second half, the match came down to the wire and Haagen's save secured GOG the win, 28:27.

"We played at our highest level in defence and we are very pleased with the effort. Plock were very skilled at playing six against five, while we had major challenges in our six against five game, and I think we could have had more control over the game if we had mastered that part of the game as well," he said.

Meanwhile, Plock coach Xavi Sabate credited Haagen's save as the reason why GOG emerged victorious. He said: "We could have had a draw, but their goalkeeper had an important save at the end and they took the win. We had some challenges in defence and we had a hard time stopping Josef Pujol."