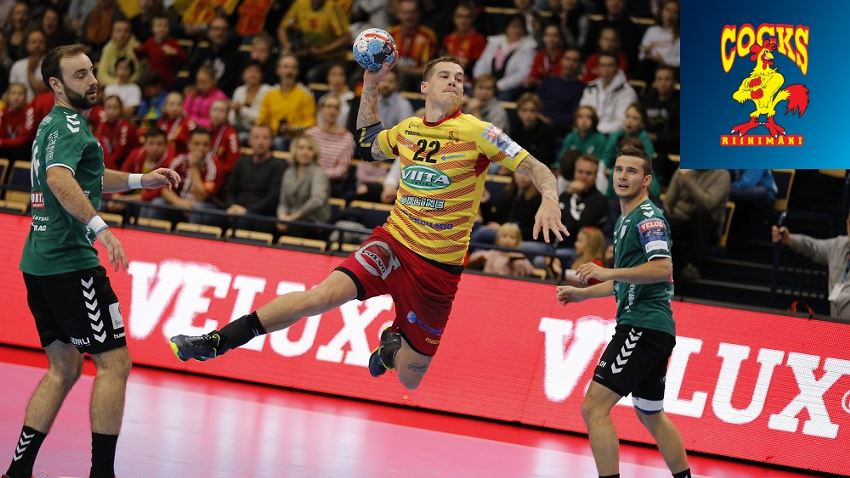 Each year since 2013 Cocks have been playing in Europe. Having started their European Cup adventures in the Challenge Cup, they competed in the EHF Cup before celebrating their debut in the top-level VELUX EHF Champions League last season.

After achieving six points in Group D in their maiden season, the flagship of Finnish handball aim to improve even further in their new Cocks Arena.

- What will the new arena mean to Cocks’ chances in the VELUX EHF Champions League?

The new Cocks Arena will enable more spectators to watch the team’s home games, and this should obviously result in increased support from the standings, just as improved sponsor facilities will also play a part.

“We want to introduce top handball to the Finnish people in a top arena, our new Cocks Arena,” says manager Jari Viitä, who has high expectations in the new venue. “This is only our second year in the Champions League, and the first year in our own arena, so this season will be different and interesting. We hope our arena will give us the home advantage we need. I believe Finnish sports enthusiasts and sports media are now waking up to realise what a big honour and achievement it is for Cocks to be in the Champions League. Last year, we showed that even a semi-professional team like ours can give a good fight against the top teams. Our aim is of course to better our results and get more points.”

- What will the many changes in the team mean?

Six players have left while five have joined, so at first sight the squad appears thinner than last season. However, Cocks are used to dealing with changes in their roster from year to year, and so far, head coach Gintaras Savukynas has done well to handle the challenge. Being free of too much pressure in the Finnish league and gaining valuable match practice in the Baltic league, Cocks may very well appear as a strong unit once again.

- What can Cocks achieve in the Champions League this season?

Getting six points from two wins and two draws in their debut season makes Cock dare to dream a bit further this time.

“Last season was all about showing who we are, and also about getting to know the Champions League system,” says team captain Teemu Tamminen. “Now the team has only one goal: To play better, faster and tougher than last season. Hopefully, this will pay off in terms of more points - or even a place in the next round.”

Under the spotlight: Nico Rönnberg

While the team has undergone several changes again this year, the key player is still the same: success for Cocks in the Champions League depends a lot on Nico Rönnberg. The experienced backcourt player needs to do well in order for Cocks to be successful. With his many years in Cocks and in the Finnish national team, Rönnberg and his calmness, his uncompromising attitude and his huge big-match experience is essential to the team.

Having won the Finnish championship every year since 2007 except for 2012, and having won the Baltic league the last four years in a row, has obviously given Cocks self-confidence, and so did the six points they achieved in the group phase last season. In their attempt to do even better this year, they will be up against Swedish champions IK Sävehof, Slovakian title holders TATRAN Presov, Macedonian side HC Eurofarm Rabotnik, Spanish former Champions League winners Bidasoa Irun, and Portuguese runners-up Sporting CP.

“We realise that every opponent is equally skilled and ready to fight for the points. We know that every game will be a tough 60-minute fight, but we are more than ready for the challenge,” Tamminen says.

The entire Cocks team knows where to go every year before the start of the season: Kolding, Denmark. The club has a formalised cooperation with KIF Kolding, which means that Cocks set up a pre-season training camp in the Danish city every year and plays a test match against the local former Danish champions. Last year, Cocks managed to win this meeting for the first time. However, they failed to repeat the success this year, getting defeated 45:22.

What the number say

Over the past 12 years, Cocks have won a total of 25 titles, winning the Finnish championship 11 times, the Finnish Cup 10 times and the Baltic League four times.