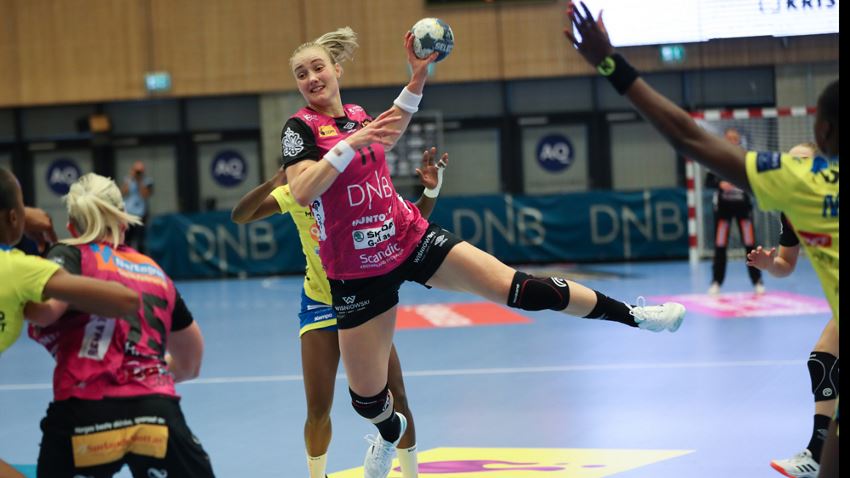 The last time Vipers Kristiansand and Metz Handball met was in Budapest, at the last DELO WOMEN’S EHF FINAL4, when the Norwegian club won by one goal. Today’s context was different as the French side had the maximum of four points after two games, while Vipers needed to bounce back after losing in Podravka last weekend.

The whole game was all about Vipers’ defence trying to contain Metz centre back Grace Zaadi. It worked during the first seven minutes of the game. During that short time, Vipers’ attack was firing on all cylinders, with Heidi Loke and Marta Tomac scoring a combined seven goals to give their team a three-goal advantage.

But a timeout for Metz changed things around. The French club’s offence seemed unstoppable, with Zaadi being key as she scored eight goals in the first half alone. The visitors went to the dressing room leading by four, 21:17.

Things did not improve for Vipers after the break. Zaadi was scoring less, but Orlane Kanor and Olga Perederiy were keeping Metz ahead on the scoreboard. After just 37 minutes, Perederiy gave the visitors their biggest lead of the afternoon, 28:20.

Just as it looked as though Metz had secured the two points, Vipers found momentum and came back into the game. Emilie Artnzen and Ragnhild Dahl scored important goals to put their team back on track. In the dying seconds of the game, Arntzen scored the equaliser for Kristiansand, giving her team a point that surely tasted like victory.

The two teams' coaches both expressed frustration with the result.

Vipers coach Ole Gustav Gjekstad said: "I have to be satisfied with one point today. Metz were ahead by eight goals, and for us to come back felt really good. We played one of the best teams in Europe, and we struggled to cope with their pace and running."

Metz coach Emmanuel Mayonnade added: "I'm very disappointed. We made a lot of mistakes in defence and missed some easy chances. When you're eight goals ahead you expect to win the game, and that's what makes this draw extra frustrating and disappointing."