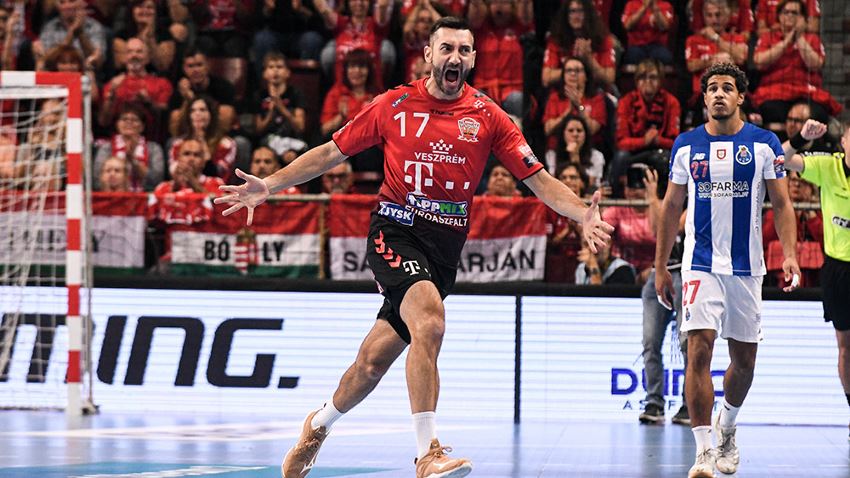 Veszprem had a tough ten minutes to start off the game, but, ultimately, their depth and experience paid off, as they stopped a two-game losing skid in convincing fashion, taking a commanding 38:28 win against FC Porto Sofarma
GROUP B
Telekom Veszprem HC (HUN) vs FC Porto Sofarma (POR) 38:28 (19:16)
A defeat would have tied Veszprem’s record for most lost games in a row in the VELUX EHF Champions League and the Hungarian champions did little to give themselves a chance at start of the game.
Porto converted all their first six shots to jump into a 6:3 lead after just five minutes, as Veszprem’s defence was non-existent at the start of the game. Yet Veszprem’s superb depth bailed them out once again, as seven different players scored in the first 11 minutes to spark a 3:0 run.
Despite a Porto time-out, Veszprem’s attack continued to be flawless, their defence got the necessary stops and interceptions, with another 5:0 run helping the hosts pull out to a 12:8 lead.
With a superb 68 per cent attacking efficiency and nine different outfield players on the scoresheet, it was no surprise that Veszprem had a 19:16 lead at the break, despite Porto’s goalkeeper, Alfredo Quintana, registering seven saves.
In the second half, another 3:0 run gave Veszprem a six goal lead with a score line of 26:20. From here Porto slowly continued to fall behind, as the Hungarian side threw everything they got at their opponents, who, at times, risked it all and took off their goalkeeper and played with seven versus six in attack.

All outfield players, bar defensive specialist Mirsad Terzic, scored at least one goal, as the Hungarian side completed a 38:28 win, stopping the two-game losing streak and jumping to the fourth place in the group.
Speaking after the game Porto coach, Magnus Anderson, spoke and mentioned how this was a good opportunity for his side to learn "Veszprém is one of the best teams in the world and it is not easy to play against them. There are many young players in our team so we learned a lot from this game."
Dragan Gajic was positive speaking after the game but was focused on the upcoming games. Gajic said "We are happy, we played freed today. After a good season start, we were a bit down in the last days, but the good teams always come up. We have to enjoy this victory, but the show must go on."
Author: Adrian Costeiu / JS
Tweet