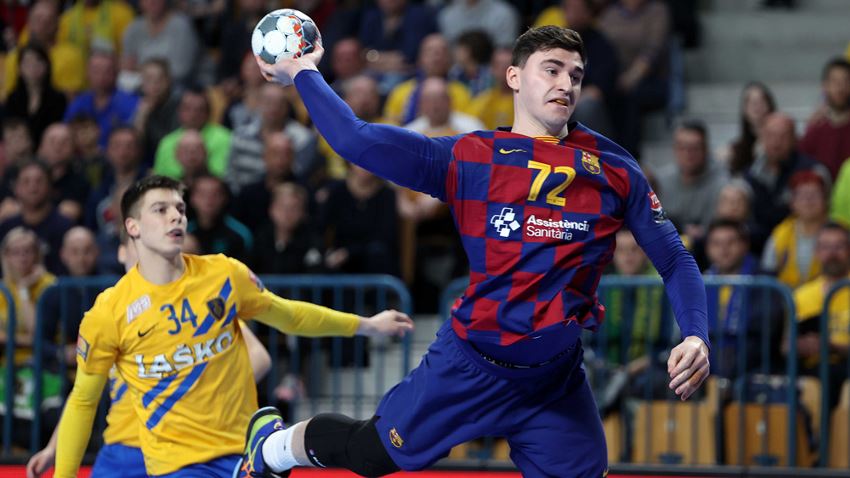 Barça secure first place in group A with win in Celje

Both teams were looking for points on Sunday afternoon. Barça needed to get a least a draw to definitely secure top spot in the group and a direct ticket to the quarter-finals.

Celje, on the other hand, needed a point to secure their Last 16 place, although they could never have finished higher than sixth as Flensburg and Aalborg are already too far ahead to catch up. The loss means they must now wait for the results of the final round next week.

After losing the first leg by 24 goals in Spain, Celje knew that a poor period against Barça could have huge consequences - perhaps why the hosts started the game strongly, thanks to David Razgor.

The Slovenian left wing scored five times in the first 30 minutes and, as a consequence, Celje were ahead by one goal after 16 minutes.

But Dika Mem’s arrival on the court turned things around for Barça. The French right back scored three straight goals to put the visitors on the right track.

Coupled with a good defensive period in which they did not concede any goals for six minutes, the Spanish club broke away on the scoreboard and had a five-goal advantage at the break (19:14).

Once the gap was created, all Barça had to do was to keep their advantage. As Jure Dolenec netted seven times, he was ably backed up by the rest of his team – particularly Raul Entrerrios and Aron Palmarsson.

Toughening up the defence in order to make sure Celje would be unable to come back, Barça cruised away, taking an eight-goal lead 10 minutes before the final siren and finishing up with a 37:25 victory.

Barça coach Xavi Pascual said: "We controlled the match all the time, it was an important match for us and I am happy with my team who showed a great performance with which we secured our first goal of the season, to finish first in the group.”

"Barça are the best European team at the moment, they play attractive, fast, and have great players," Ocvirk said. "The first rotation played great, but when we changed players we could not keep the pace.

"Nevertheless it hurts to lose at home with this big difference and we have to learn and improve to be able to get better results. We have a young team where some players are getting first minutes in this competition and at the end this is something we have to have in mind," he added.