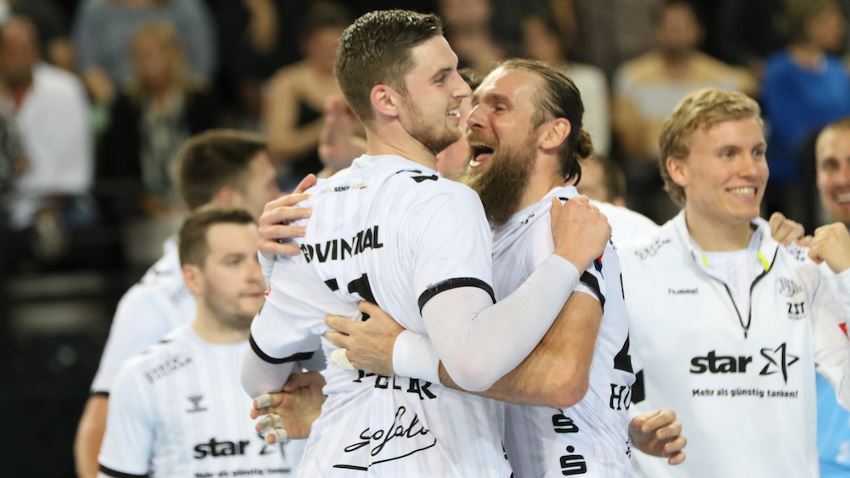 Another superb VELUX EHF Champions League Match of the Week brought everything to the table, as Montpellier ultimately failed to protect a three-goal lead versus THW Kiel that stood with one quarter remaining. The ‘Zebras’ thereby enjoyed another great win, their fourth in five games, and opened a three-point gap on top of the group with a stunning 33:30 result against the French side.

Elsewhere in group B, title holders HC Vardar failed to impress in the rematch of last season’s final, with Telekom Veszprém HC taking a convincing 39:30 win.

It was gruelling, but HC Zaporozhye Motor earned their first point of the season with a draw against FC Porto Sofarma. The Ukrainian side were down by two goals with less than 45 seconds to go, before securing the point in the final second with an entertaining 35:35 draw.

PGE VIVE Kielce snapped their two-game losing streak after stopping a surprising comeback from HC Meshkov Brest, to leapfrog Porto in the standings, as both teams now have five points.

There was a DJ, some loud tunes, a hugely energetic arena and high hopes. The recipe was perfect for Montpellier to hand Kiel their first loss of the season, especially as the French side entered the court after three superb wins in a row.

But the perfection was ruined by a slow start, and with Kiel firing from all cylinders in attack, they could not be contained by Montpellier. An 83 per cent shooting efficiency helped Kiel jump to a 10:5 lead, as the ‘Zebras’ ran riot once again and confirmed their offensive prowess.

Yet Montpellier were not the same team that gave up easily last season, especially in front of a full house and after a three-game winning streak.

With left wing Hugo Descat in superb form, as in the previous four games, the hosts cut into Kiel’s lead like a battering ram. The German side boasted a narrow 17:16 lead at the break.

Suddenly, the game was on and Montpellier’s defence responded incredibly well. The French side, who have not been at their best in the domestic league, limited Kiel to only four goals scored in the first 16 minutes of the second half, as the German side’s attack plummeted.

Key players like Domagoj Duvnjak, Nikola Bilyk and even line player Hendrik Pekeler missed easy shots, and the game was turned on its head. Montpellier converted easy fast breaks to take a 24:21 lead with 13 minutes to go.

But when it looked like Montpellier were inches from securing the win, a 7:1 run from Kiel changed everything, as goalkeeper Niklas Landin closed the goalposts with half a dozen superb saves.

After a well-taken time-out from coach Filip Jicha, who reinserted his back line of Duvnjak, Lukas Nilsson and Harald Reinkind, Kiel overpowered Montpellier at both ends of the court to take a 29:26 lead with the clock winding down.

It was Nilsson who stole the show, and was named the Player of the Match of the Week after scoring 11 goals.

Winless Motor had one of their last chances to re-enter the fight for a Last 16 berth, though Porto’s home court has proven one of the hardest to conquer in the VELUX EHF Champions League this season.

Indeed, the Portuguese champions jumped to a 5:2 lead, as their defence took the load. But their attack was also mesmerising, as 21-year-old left back Andre Gomes scored four times in the first 15 minutes to propel his team to a 10:8 lead, despite not having tallied more than three goals in a game this season.

However, though they were leading for the whole first half, Porto were surprised in the dying seconds, as goalkeeper Victor Kireev scored his first goal of the season to tie the game, 15:15, and ensure a hectic second half.

Motor had the upper hand to start the second period, but a 4:0 run by Porto, inspired by right wing Antonio Areia Rodrigues, helped the hosts jump back to a 23:20 lead that looked essentially unassailable.

The two sides continued the back and forth, with Motor tying the game every time Porto tried to open a two-goal gap. It was Motor’s top scorer, playmaker Barys Pukhouski, who led the charge, scoring nine of his 12 goals in the second half – and the Ukrainian side took the lead, 30:29, with 10 minutes to go.

When everything pointed to a Porto win, a magnificent comeback in the final 56 seconds of the game helped Motor seal their first point of the season. Pukhouski scored first, before left wing Igor Soroka had the final say, tying the game with three seconds remaining and leaving Porto dumbfounded.

“This is sports – sometimes you lose, sometimes you play a draw and sometimes you win,” said Porto coach Magnus Andersson. “It’s more tough when you’re winning by two in the end of the game, but we can’t complain. We missed a shot, but I’m more disappointed with our defence today. 35 goals is too many goals.”

This was the game with the most goals combined in Porto’s history in the VELUX EHF Champions League, the previous record being set at 66, against La Rioja, in 2015.

After the Polish side lost their last two games, their start against Brest was flawless. Despite coming off the back of their first win of the season, the hosts never got going, as Kielce had too much firepower and secured an early 5:1 lead.

But this was no walk in the park for the guests – rather it was some superb Andreas Wolff saves and the fact they took advantage of Brest’s attacking woes that saw Kielce extend their advantage.

With eight different players on the scoresheet for Kielce, the 15:9 lead they took into the break appeared secure, after their defence frustrated Brest for most of the half.

Kielce looked like they were able to hold the gap, as Uladzislau Kulesh and Angel Fernandez took the responsibility, before a William Accambray-inspired Brest cut the gap to only three goals, 23:20. With 15 minutes on the clock, the Belarusian side were suddenly back in business.

Despite a red card for defensive enforcer Viachaslau Shumak, Brest took the game to Kielce, and were down by just one goal, 27:26, with four minutes to go. But the top scorer of the game, Kulesh (seven goals) – who knew Brest well, having played for rivals SKA Minsk between 2011 and 2017 – helped elevate Kielce to their second win of the season.

“You know how challenging it was for our team to play this match after we lost three consecutive top-level matches – two in the Champions League and one in the home league against Wisla Plock,” said Kielce coach Talant Dujshebaev. “Certainly, we arrived in Brest with big motivation and gained two points. Basically we succeeded in the end, however, the match was a real thriller.

“I really address my compliments to the opponent’s side, who really didn’t perform in the right way in the first half but managed to come back to the match and keep the score undefined until the last minutes of the game. I wish them the best of luck in the next matches. For our team certainly I hope that these two points will help us to regain confidence for future matches.”

In the previous round, Vardar scored only four goals in the first half against Kiel. That game prompted a coaching change, with Eduard Koksharov taking David Pisonero’s place, as the Spanish coach was demoted to the assistant role.

Yet the change did not provide the expected answer for the Macedonian side, who lost their second game in a row on Saturday.

Clearly frustrated by Kiel, Vardar focused more on attack in the rematch of last year’s final, but their defence was far from the standard for such a clash. 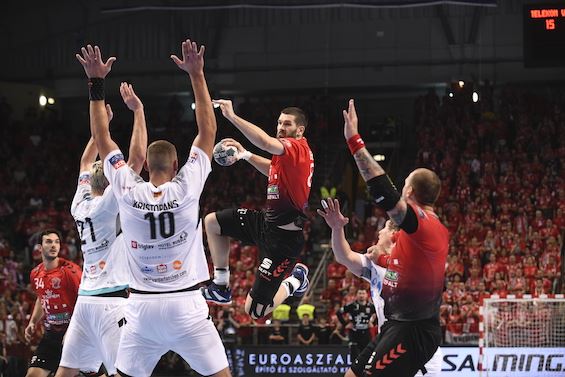 With superb depth and experience, Veszprém looked unstoppable, putting 21 goals past a defence that conceded from every position in the first half.

Brought in for Veszprém this summer, Danish left back Rasmus Lauge Schmidt had a superb outing, with eight goals, as Vardar only managed to lead for the first six minutes of the match. A 3:0 run spurred by line player Andreas Nilsson and Lauge turned the tide – and it was game over for Vardar from that moment.

There was nothing stopping Veszprém’s attack, with the Hungarian side jumping to their second win in a row after two under par games that resulted in losses.

Veszprém’s home form is particularly superb, as the goal difference from the three wins should be enough to scare any opponent: +31 .

Therefore, it was no surprise that a weakened Vardar had no chance to stop Veszprém. The defending champions now slide back to fourth place in the group, with the Hungarian side jumping to second.