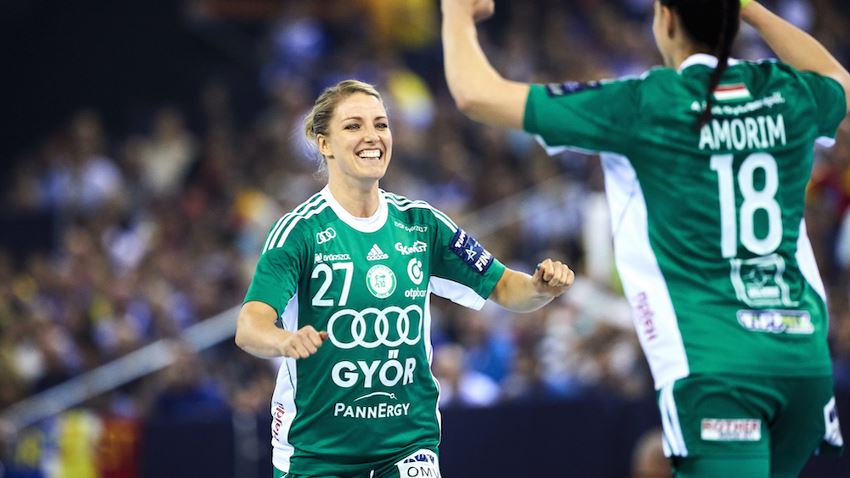 Who was the biggest hero of the WOMEN’S EHF Champions League 2016/17 final?

They made it for the third time, but their hunger was definitely not stilled: When Györi Audi ETO KC won the final of the WOMEN’S EHF FINAL4 2017 31:30 against Vardar, it was the start of a series, as the Hungarian side took the following two titles in Budapest.

As they would one year later, in 2017 Györ faced the Macedonian team in the final, and, like in 2018, they won the trophy thanks to a one-goal advantage after extra time.

From Friday until Sunday, 1 to 3 May 2020, fans can relive the thrills of that historic weekend, as all matches from the WOMEN’S EHF FINAL4 2017 will be streamed on the EHF Champions League Facebook page and the ehfTV YouTube channel.

The same four teams as in 2016 had qualified for the EHF FINAL4 in the sold-out Papp Laszlo Arena in Budapest. Most of the 12,000 fans hoped that Györ could avenge the 2016 defeat against CSM Bucuresti after the first ever penalty shootout in a Women’s EHF Champions League final.

CSM’s hopes to defend the trophy came to an end in the high-scoring semi-final against HC Vardar, when Andrea Penezic and Jovanka Radicevic steered the team of new head coach Irina Dibirova to their first ever final with a 38:33 win.

An incredible defensive performance and nine goals from Anita Görbicz were Györ’s keys in the semi against Buducnost (26:20). And finally, the most effective defence of the season clashed with the strongest attack, while Radicevic and Andrea Lekic faced their former club Györ in the final.

Final debutants Vardar were ahead only twice in the match, at 1:0 and 3:2, but managed to deliver an on-edge game for 70 minutes. Tamara Mavsar levelled the score for 26:26 to make it the second straight extra-time final in the WOMEN’S EHF Champions League.

But finally, when Nora Mörk netted for the 31:29 79 seconds before the end of extra time, Györ had sealed the deal again. They became the first club to win the WOMEN’S EHF FINAL4 in Budapest twice, following the introduction of the format in 2013/14.

Now we want to know, who do you think had the most outstanding performance in the final?

Nycke Groot: The Dutch centre back was awarded MVP of the WOMEN’S EHF FINAL4 2017, after scoring six goals in the final and five in the semi. Groot had already been the top scorer of the 2014 edition of the event and took the same ‘award’ in 2019. She is currently the overall top scorer in the history of the WOMEN’S EHF FINAL4 events, but Groot is not only a striker – she was the mastermind of Györ’s attack.

Anita Görbicz: The Hungarian legend was Györ’s top scorer in the semi-final, with nine goals, and in the final, with seven strikes, making her the top scorer of the EHF FINAL4 that year. For the former centre back, who turned into a left wing in the last years of her career, it was her third Champions League title with Györ. Two more followed in 2018 and 2019.

Anja Althaus: She shed a river of tears after losing the final. With six goals from six attempts, the German line player was Vardar’s top scorer in the final – and thought that this match would be the end of her career. But some weeks later she received a phone call from Györ, signed a one-year-contract and ended up taking her third Champions League trophy after 2009 and 2010 (both with Viborg) in 2018, finishing her career on the podium.