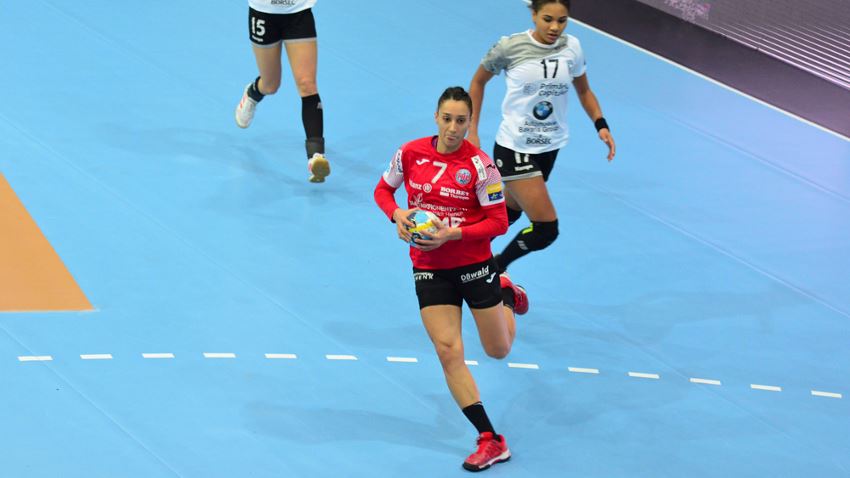 CSM Bucuresti looked all set to win their seventh game of the season after a dominant first half in which they led their German opponents Thüringer HC by six (14:8), but they were ultimately stopped short, failing to secure the third place in the standings in the progress, after a 23:23 draw – and they could have even lost against the side who have managed just one Women’s EHF Champions League win in 12 attempts this season.

Ahead of this game CSM Bucuresti coach Dragan Djukic lamented the lack of fit players in his squad, only naming 15 for the clash against bottom side Thüringer HC as his injury list appeared overwhelming.

Having to make do without stars like Cristina Neagu, Amanda Kurtovic, Andrea Lekic and Majda Mehmedovic his team responded well, taking a 5:3 lead after 12 minutes.

Even though there were technical errors and ball-handling mistakes for both teams, with her creative mind as playmaker, Elisabeth Omoregie helped to make CSM look more poised, as the Romanian defence was exactly what Djukic wanted.

The weekend of #ehfcl action has already completed its first day!

A great first-half performance from home side CSM Bucuresti was equalled by a great second-half showing from @ThueringerHC.

So, the game finished equal, 23:23. pic.twitter.com/xcJFd3VtGQ

A seven-minute scoreless run, prompted by five saves from Jelena Grubisic, was Thüringer’s undoing, as CSM rode a 4:0 run to jump to a comfortable 11:6 lead.

With Jovanka Radicevic once again in fine form, scoring six times in the first half, the Romanian side looked to have built an unassailable lead after 30 minutes, 14:8 – their best first-half performance in the Women’s EHF Champions League this season.

While CSM conceded just eight goals in the first half, Thüringer scored eight times in 13 minutes in the second half, as the Romanian side started to slip as the German side, led by playmaker Iveta Luzumova, shocked the home crowd – and players – who saw the lead evaporate, as the German side tied the game for the first time at 18:18, in front of 2,000 dumb-founded fans.

Only Grubisic managed to keep CSM afloat with her saves, as a 3:0 run for the German side saw Thüringer take the lead for the first time, 21:20, with eight minutes to go.

Ultimately, the game ended in a draw, as Thüringer’s aggressive approach to play 7 vs 6 in attack by taking out the goalkeeper worked wonders to secure a 23:23 draw, and the could have even won in the last moments as, following a time-out with just 11 seconds left they failed to strike.

“I am satisfied with how we played, especially in defence, but it was a pity that we could not do more,” said CSM’s coach, Dragan Djukic, after the match, who knows his side were safely into the quarter-finals no matter what the result tonight.

“We believed until the end, even at half time, when we were down by six,” said Herbert Muller, Thüringer’s coach. “I am very proud about how we did here and about the result as CSM is a powerhouse and will be a tough nut to crack in the quarter-finals.”