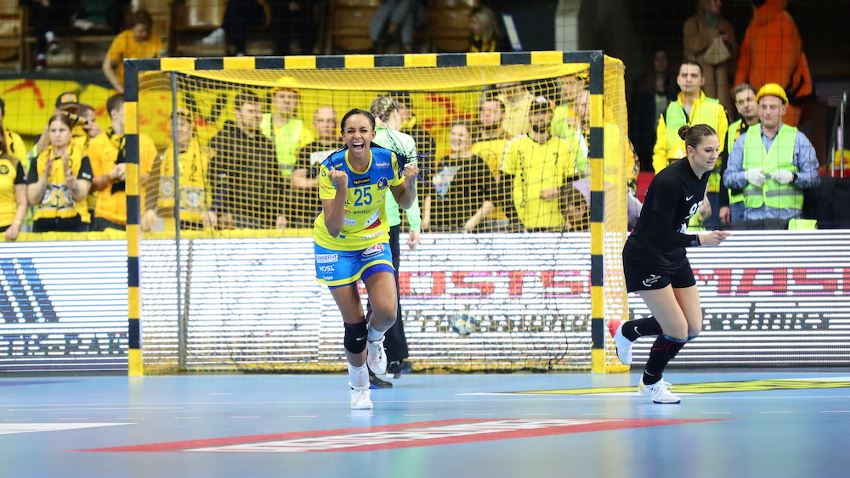 Metz on top of group after win at Rostov

Metz Handball edged closer to the DELO WOMEN’S EHF Champions League quarter-final with an important away victory over Rostov-Don in the Match of the Week on Saturday afternoon, as they defeated the Russian side 24:29.

The French team had previously been level on nine points with Rostov-Don, and now take their tally to 11, leaving the MOTW hosts behind.

Rostov seems to be a lucky city for Metz – the French side have now won three of four matches in European competitions there, with one more game ending in a draw.

Good defence and some saves from Ivana Kapitanovic were a key to Metz’s success. In particular, the visitors managed to restrain Rostov back Anna Vyakhireva, who scored just three goals of 12 attempts.

In the first half, Rostov’s goalkeeper Anna Sedoykina also did a good job and kept her team in the fight. The home side were losing 11:9 before goals from Iuliia Managarova and Kseniya Makeeva helped the Russian side draw level before the break, 11:11.

Metz received a free throw after the half-time buzzer, but Orlane Kanor hit Polina Kuznetsova and was given a direct red card as a result.

However, losing Kanor did not affect Metz’s game in a negative way, as the French side had a solid collective performance and took the advantage after the break.

As many as 10 players scored for Metz in that game, and none netted more than five times. Midway through the second half, the visitors led by four goals (21:17), and none of Rostov’s attempts to hit back brought any result.

“It was a real fight, and it’s so cool to play in this type of atmosphere. We thought about this game like it was a last fight,” said Metz line player Olga Perederiy, while Rostov coach Ambros Martin commented:

“They acted in a good way from the very first moment till the end of the game and deserved the victory. As for our team, we did not feel comfortable. We had problems in defence and offence. But if we must lose, it’s better to lose now.”