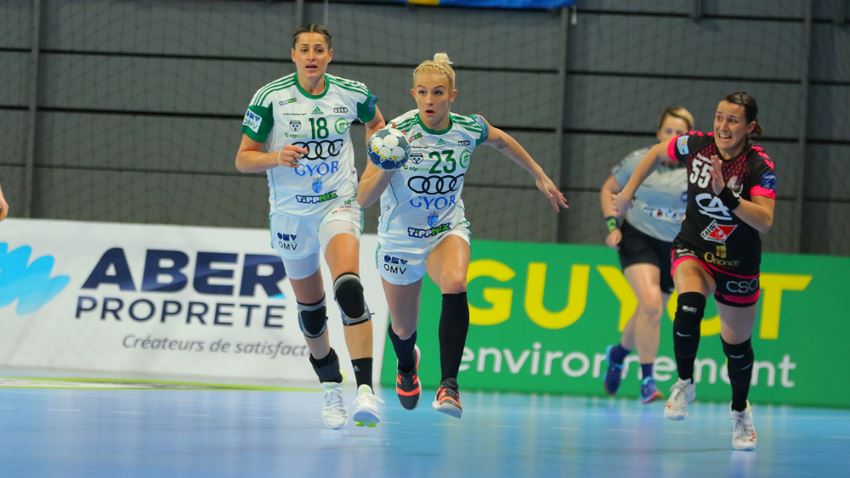 Something had to give, as the only two unbeaten sides in the competition met once again after a 27:27 draw in the first leg.

It was Brest who paid the price of a soft end of the game, as Györ finished the match with a 6:2 run to extend their record unbeaten run in the competition to 35 games, after the 28:29 win.

The last-gasp draw saved by Györ in the first game between the two sides was a warning signal for the title holders, while Brest proved their mettle in the toughest of conditions.

One month later, the French side proved that they are no pushover, as they challenged Györ right to the buzzer in a tough fight – ultimately losing their first DELO WOMEN’S EHF Champions League this season.

Györ drew the first blood, but Brest pushed back immediately with a 4:1 run that set the tone for what they were trying to prove.

Backs Monika Kobylinska and Ana Gros were once again superb, combining for 11 goals in the first half, as Brest kept their opponents in check. At one point Brest were up by four goals at 9:5 before Györ fought back level, with Monika Kobylinska’s half-time buzzer-beater giving the hosts the first half advantage.

In the second half it was a passionate fight between the two sides, with Györ taking back the lead, 21:20, after 39 minutes, as Brest’s attack showed signs of slowing down.

Gros and Kobylinska ran the attack, but Foppa stole the show with seven goals. Brest had a three-goal cushion, 26:23, with 12 minutes to go.

However, the game was far from over. The Norwegian trio of left back Veronica Kristiansen, centre back Stine Oftedal and line player Kari Brattset lifted Györ to a 4:0 run, as the lead changed hands again.

Györ’s dynamo, Eduarda Amorim, was the player that gifted her side the win. A staple in defence, Amorim shook off an indifferent start to the game to score important goals in crunch time, as Brest’s Isabelle Gulldén missed the final shot.

The 29:28 win means that Györ will need only one point in the last two rounds to secure first place in the group, while Brest recorded their first loss this season.

Györ head coach Gabor Danyi said after the match: "We were a little lucky in the last three minutes but we never gave up and we deserved at least one point. Brest is a very strong team that have given us problems twice already. I think or hope that we will see each other at the DELO WOMEN'S EHF FINAL4."