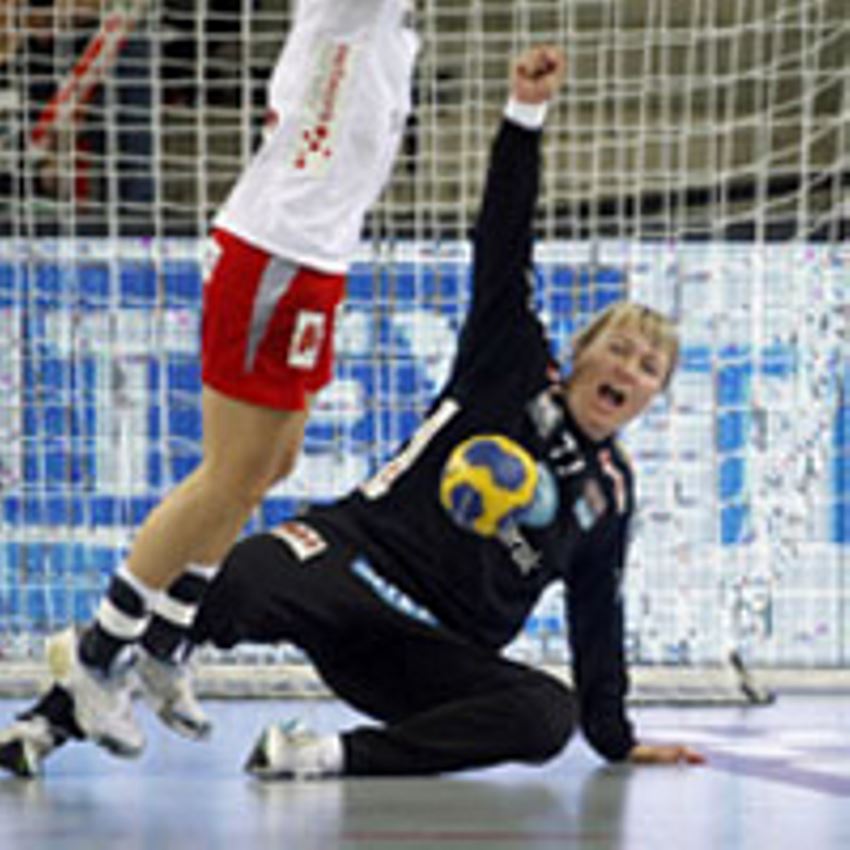 Despite having had their fate in their own hands, FC Midtjylland were unable to celebrate victory in Spain, so it is Larvik, the title-holder, who will advance to the semi-final, thanks to their home win over group winner Győri Audi ETO.

In Group 2 Krim defeated Metz and with their first home victory, the Slovenians finish in third spot, whilst their counterpart Metz are the bottom team in the group.

With Larvik earning the last remaining berth, the line-up of semi-final participants is now finalised. The pairings on the first two April weekends will be Győri Audi ETO (HUN) vs. C.S. Oltchim Rm. Vâlcea (ROU) and Budućnost (MNE) vs. Larvik (NOR).

A fantastic Amanda Kurtović in the back-court, a marvelous Cecilie Leganger in the goal, and a defence like a massive wall - these were the key elements for Larvik´s clear victory against Győri Audi ETO.

The Hungarians were only able to keep the match open in the first half, when they were leading most of the time, but the Scandinavians turned the game towards the end of the first period with their fantastic determination and hunger for victory.

Linn Jørum Sulland was superior in the back-court and the right-back also effectively executed her 7m penalties.

Not only her, but the whole Larvik team presented itself in top shape, whilst in Karl Erik Bøhn´s team it was only Katalin Pálinger and current EHF Champions League top-scorer Anita Görbicz who could equal the high standard shown by the Norwegians.

Görbicz scored nine times, but her team-mates weren´t consistent enough in the second period, when the Hungarian performance level decreased and Larvik punished every little mistake of their opponents.

For about 35 minutes the match was a high-quality fierce clash between the two teams, but then Larvik found top-gear and with their speedy wing players, massive defence, and Leganger producing several athletic saves between the sticks, Ole Gustav Gjekstad´s team increased the lead minute-by-minute to celebrate an easy victory.

The Danes were unable to use their direct chance to qualify for the semi-final, so with Itxako´s victory, the Spaniards will finish in third position and Norway´s Larvik advance to the Top4.

A lot was at stake for FC Midtjylland, and therefore the game built up very slowly, with both teams unable to score for six minutes.

Best player of the match, Alexandrina Barbosa, opened the scoring with her first goal for the hosts, but the Danes turned the score around to 2:1.

This was their only lead in the game though, as Itxako increased the lead throughout the first period to four goals at 8:4 thanks to some disciplined defensive work and Barbosa´s magnificent goals from distance and break-throughs.

However, for the hosts, Silvia Navarro was simply amazing in goal and as Itxako managed to stop FCM´s fast counter attacks, the Danes disappointedly left the court.

Although the Spaniards celebrated victory, their heads hung low, as it was not them, but title-holder Larvik, who advanced to the semi-final.

In their final EHF Champions League game of this season, the hosts from Ljubljana won their second match in the Main Round and so coach Tone Tiselj´s team finishes in third position in the group, while Metz remain the bottom team with just one point in the bank.

As in previous matches, Krim produced a very strong first period. Coach Tiselj put great emphasis on the defence, and on the back-line, sharpshooter Andrea Penezić rifled in goal after goal.

Croatian international Jelena Grubišić gave a grandiose performance in the Krim goal, saving with 55% efficiency in the first 30 minutes.

The French champions showed their strength in the second half, when Krim´s level dropped a little, and thanks to some concentrated attacks, coach Sébastien Gardillou´s team was able to reduce the gap to two goals.

With ten minutes still to go French hopes were still alive, as Marion Limal started her engines. But the hosts also increased their pace, and with Penezić continuing to hit the net, the home side deservedly won and bid a nice farewell to the EHF Champions League.